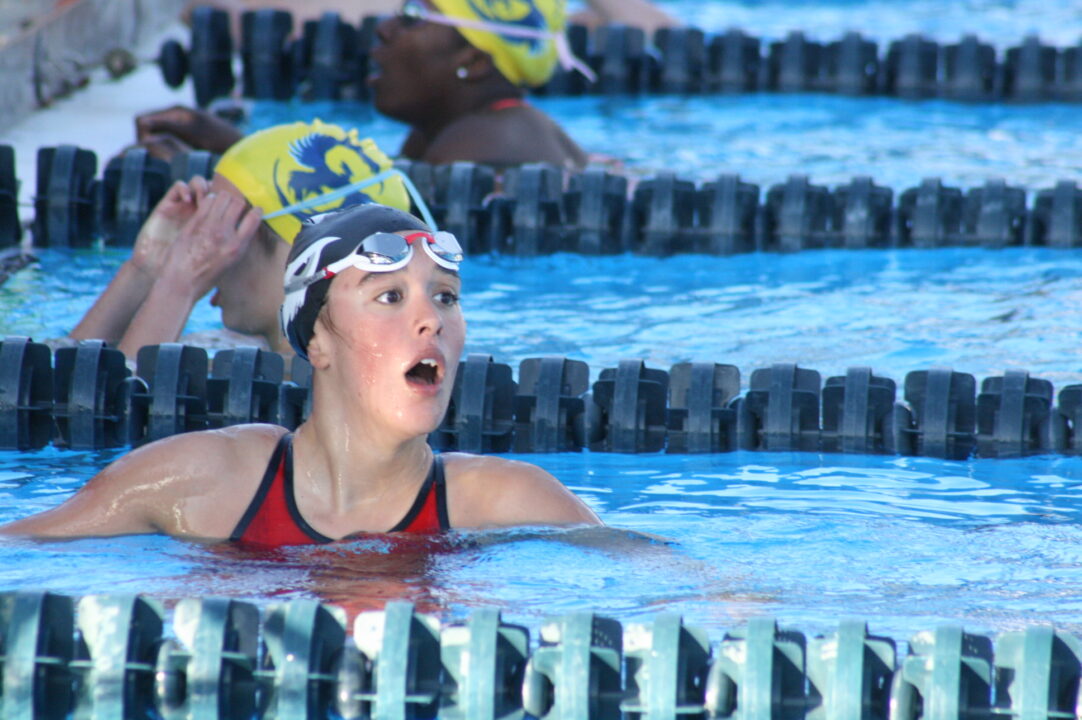 Erika Pelaez won two events for the second day in a row at the meet. The 15-year-old Eagle Aquatics swimmer began the finals session by touching first in the women’s 100-meter backstroke. Her 1:01.42 was about a half second slower than her personal-best 1:00.95 from April’s International Team Trials, which ranks as the fastest this season among 15-year-old girls. Just a few events later, she also triumphed in the 50 free with a 25.86, less than half a second off her personal best from International Team Trials. It marked her fourth win of the week after touching first in the 100 butterfly and 200 freestyle on Friday.

In the second final of the day, the men’s 100 back, Joshua Zuchowski clocked a 56.34 to earn his second win of the week. The 18-year-old Stanford commit was slightly over a second slower than his personal-best 55.22 from International Team Trials. Zuchowski, who swims club for Flood Aquatics Swim Team, also picked up a victory in the 50 back on Thursday.

Anna Auld secured her third win of the week in the women’s 400 free with a new personal-best 4:17.74, more than two seconds faster than her previous best from last year’s Plantation Sectionals. The rising University of Florida sophomore and Saint Andrew’s Aquatics club swimmer also won the 800 free on Thursday and the 400 IM on Friday.

Azura Florida Aquatics claimed the top spot in the men’s 200 IM thanks to Matheo Mateos, who edged Zuchowski in 2:05.88. Mateos went more than two seconds faster back in April. For third-place finisher Kaii Winkler, it was a new personal best of 2:07.46. The 16-year-old went more than three seconds faster than his previous best from prelims. Azura Florida Aquatics also helped produce the winner of the men’s 50 free, 23-year-old Steven Aimable, who reached the wall first in 23.28 — .24 seconds off his personal best. The Senegalese national record holder in the 100 free, Aimable helped Azura Florida Aquatics extend its lead atop the combined team standings to 157 points after Day 3.

In the women’s 200 IM, Julia Podkoscielny topped the podium in 2:16.45. The 17-year-old Pine Crest Swim Team member was less than a tenth of a second slower than her personal best from February. In the men’s 400 free, Dylan Felt shaved more than three seconds off his previous best from prelims to win in 3:59.65. The 18-year-old swims club for Swim Fort Lauderdale and is committed to Davidson College.