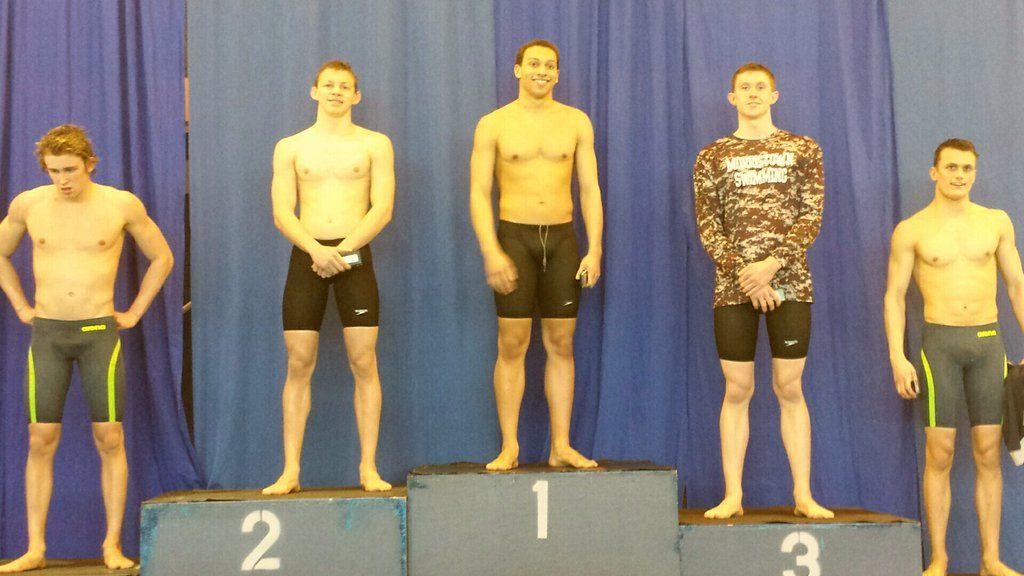 Jason Arthur (middle) had an incredible weekend at the New Jersey Meet of Champions, setting a new meet record with a win the 200 IM and later adding a 10 breast win. Current photo via @VarsityAces Twitter

The boys of Mainland Regional, Joey Rogers, Brian McGroarty, Glenn Lasco, and Justin Liu set and broke a new 400 free relay meet record this weekend at New Jersey’s high school state meet, the Meet of Champions. The boys first broke the record with 3:06.24 in prelims, then came back in finals to lower it even further with 3:05.33.

The other meet record of the day came from Teaneck’s Drexel commit Jason Arthur, who defended his title from last year, taking down his own 200 IM record 1:49.16 by a second with 1:48.14. Arthur also took the title in the 100 breast, winning the event in 56.70.

The Mainland Regional team also won the 200 medley relay with 1:34.74, when Derek Kneisel, McGroarty, Rogers, and Liu teamed up to outswim Morristown’s 1:35.05.

The 50 free was a head-to-head race between New Providence’s David Hua and Randolph’s Vinny Marciano. Hua ended up with the title, clocking 20.91 to Marciano’s 20.96. However, Marciano came back to win the 100 free in 46.03.

To round out the individual events, Michigan commit Alex Martin of Moorestown won the 100 back by a second and a half, clocking 49.74, and Mountain Lakes’s Matt Luciano won the 100 fly in 50.00.

Picture finally made it on swim swam. What a day