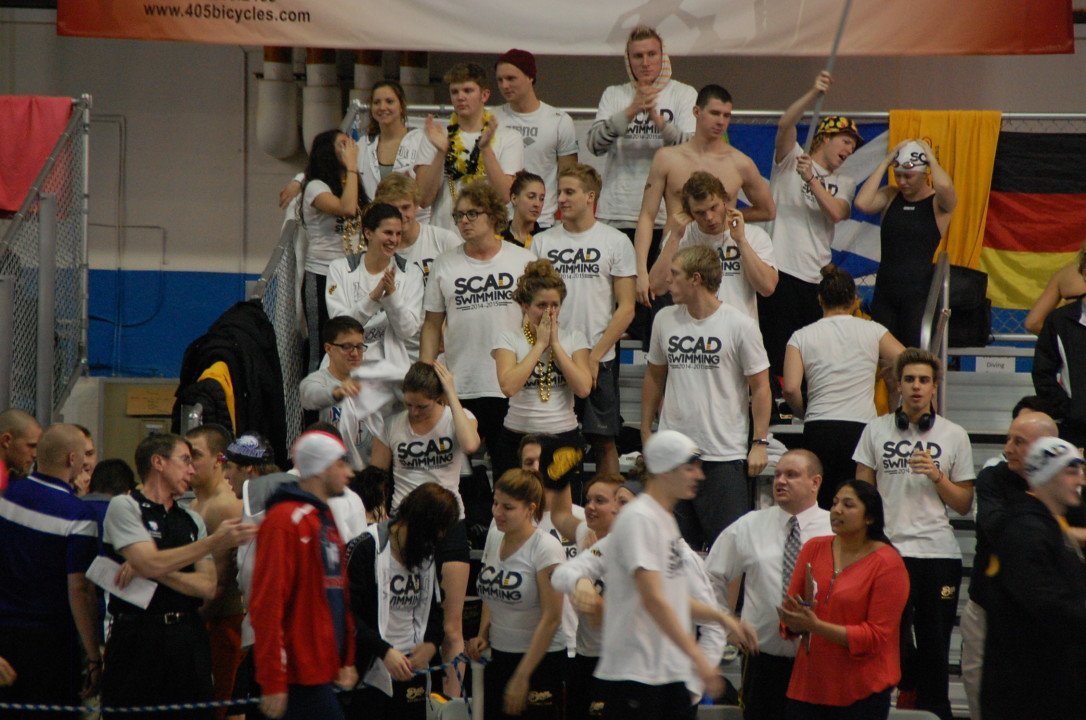 The 2016 NAIA National Swimming and Diving Championships begin on Wednesday, March 2 at the Columbus Aquatic Center in Columbus, Georgia.

The 2016 NAIA Women’s Swimming and Diving National Championship will get underway on Wednesday, March 2 at the Columbus Aquatic Center, in Columbus, Georgia. The NAIA, which governs the athletic programs of smaller colleges and universities, will bring together over 200 athletes from 29 schools to compete in this national championship meet.

The NAIA national title is up for grabs this year, as three-time defending champion, Oklahoma Baptist University, has transitioned into Division II of the NCAA. Savannah College of Art and Design (SCAD Savannah) was runner-up from 2013-2015, but strong performances from Olivet Nazarene University (ONU), Brenau University, University of the Cumberlands, and Biola University have kept thing exciting each year.

Scoring out the NAIA psych sheet is often a difficult exercise because many of the top athletes haven’t yet had a taper meet and are capable of big drops in prelims. Nevertheless, given the seedings, here is where the top 15 teams fall:

Only ONU and Wayland Baptist have divers in the meet, so will both have 40-50 points on the competition before swimming begins on Thursday.

Biola sophomore Lisa Tixier is the top seed in both the 50 free (23.70) and 100 free (51.18). SCAD’s Julie Woody, the highest 2015 finisher not from Oklahoma Baptist, is entered with the third-fastest time in the 50 free, just behind Maddy Kelly, a freshman from The College of Idaho, who is also ranked fifth in the 100. SCAD freshman Abigail Richey is top seed in the 200 free (1:51.79) and second in the 100. Another freshman, Simone de Rijcke of Lindenwood University – Belleville, is ranked third in the 100, second in the 200, and fifth in the 500. SCAD senior Haley Thompson is seeded fourth in the 100 and third in the 200.

Two-time defending champion Courtney Hayward of Brenau and 2014 runner-up Caroline Lepesant of SCAD are favorites in the 500, along with 2015 bronze medalist Grace Van Ryckeghem of Cumberlands. The trio lead the field in the 1650 free seedings as well. Lepesant earned the national title in 2013 and 2014, while Hayward won in 2015. Lepesant is top seed in the 500 with 4:58.55; Hayward, in the 1650 (16:56.92). Other distance freestylers include Emma McKinley of SCAD, de Rijcke, Richey, Brenau’s Ella Kleinschmidt, and Lara Kaufmann of Union in the 500, and Kaufmann, Kleinschmidt, Morningside’s Tracy Gates, and Shannon Brouk of SCAD in the 1650.

Brenau freshman Dowling tops the field in the 200 back with 2:03.78. Only 5/100 behind is SCAD senior Hannah Legg, who won this event in 2013. ONU’s Moran is seeded third, followed by Christina Klouda of Cumberlands, Monahan of Columbia, Tiffany Ray of ONU, Kiesewetter Zandaval, and Bailee Spivey of Life University.

Ronni Borders of Lindsey Wilson has top billing in the 100 breast (1:04.77). Christina Ali of Biola and MK Jabbia of Brenau are second and third. West Virginia Tech’s Kendra Monnin, Andrea Vega of ONU, Kirst Coetzee of Life, Brenau’s Alisha Hodgetts, and Carly Breitbarth of Lindenwood round out the top eight.

In the 200 distance, Ali tops the charts with 2:19.81. Monnin is second, followed by Coetzee, Jabbia, Alle Ragland of SCAD, Breitbarth, Vega, and Frey.

The 200 fly is dominated by Bees from SCAD: McKinley (2:04.48), Legg, and Rebecca Justus are the top three seeds. Stephenson of Lindsey Wilson, SCAD’s Crow and Thompson, and Madeline Miller and Mary Heinz of ONU make up the rest of the top eight.

Three swimmers came in under the previous meet record in the 200 IM last year, but none is entered in the event this time around. Returning A finalists include Justus of SCAD, Ray of ONU, Jabbia of Brenau, and McKayla Stevens of The College of Idaho. The top three times belong to freshman Klouda of Cumberlands (2:06.73), Monnin of West Virginia Tech, and Ali of Biola.

2015 runner-up Hayward of Brenau is hoping to take back her title in the 400 IM; she is entered with the top time of 4:30.06. SCAD’s Justus is second seed, followed by McKinley and Klouda. ONU’s Ray, Abby Blake of Biola, Sarah Frey of Brenau, and Victoria Tornelli of Cumberlands are also seeded in the top eight.