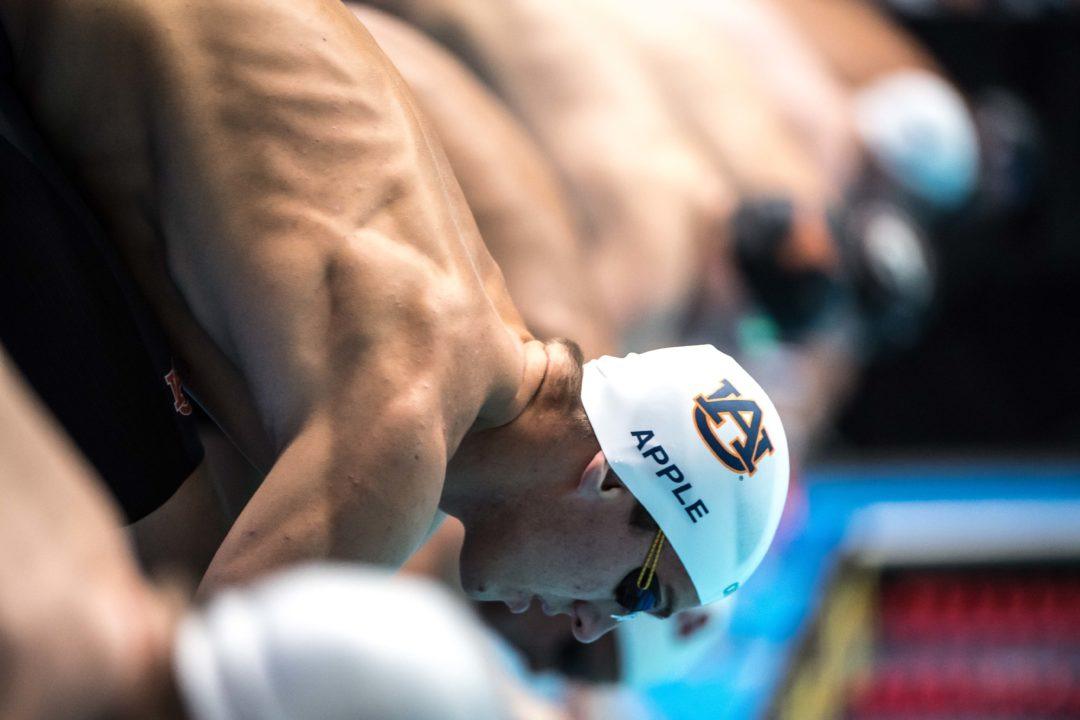 Apple commented on the fact that he has been working on his turns in practice over the holidays, particularly trying to catch his short course performances up to his long course times. This past summer, Apple turned heads at the 2017 Phillips 66 Nationals when he dropped a 48.14 in the 100 free prelims to go into finals as the top seed. He ended up finishing 4th in the heat, which earned him a spot on the world championship team, and a gold medal in Budapest.

I was Zachs age group coach. Its been two kicks since he was an age grouper. He saw Christian Quintaro do it at NCAA’s in 2014 and it was an uphill battle ever since. I told him if he never went as fast as Christian could do two kicks as well. Well, he is that fast now, so have at it Zach.

The reason he probably is sticking to it is that he is all legs from a build standpoint (60% legs, 40% torso, former high and long jumper) and his DK isnt and hasnt been his strength. He is great at getting off the walls fast and only needs about two DK to get 10 yds out and under… Read more »

Lol 2 kicks off of each wall?!? That is pretty nuts that someone at such a high level only needs 2 underwater dolphin kicks to help him improve

If your swimming is faster than your under waters, there is no reason for more than 2 dolphin kicks. I would say Dara Torres did pretty well always making sure she got up right away since here dolphins were not the greatest.

In a 200, even if your swimming is faster than your underwaters, you’ll go faster at the end of the race if you practice working your walls, since that means less distance to swim on top of the water. Assuming your underwaters aren’t horrible, that is. But, even if so, I think this is something you can see great marginal improvements on. Eddie Reese makes his team do 30-40 25s dolphin kick every day, he seems to be a believer.

Do you think those 30-40x25s are working for Townley Haas?

Everyone can improve with practice, but some people are just a lot better at swimming. I’m sure Missy tried to improve her UWs but she also got killed off the walls. At least Zach knows what works best for him, which is swimming.

Townley doesn’t need to be going 15m underwater for his underwaters to be improved, even if he does the same number of kicks but travels farther with each one, or goes the same distance with less energy he is improving on his underwaters and it will ultimately result in faster times.

hasn’t it been proved that underwaters are faster than swimming above water? If that is the case (and this is a big assumption because I don’t 100% know that is true) shouldn’t everyone work to improve their underwaters to get the advantage from them?

PKwater – I don’t think it’s been proven unequivocally. I think there’s a lot of “ifs” about drag and propulsion and length of race and stroke and etc.

To be fair he seems like a pretty big guy, two kicks will probably still get him well past 5 yards and probably closer to 10 after his breakout. That’s plenty of distance at the end of a 2 free

It’s not just the number of dolphin kicks off the wall, but the quality of them. Two kicks off a wall is pretty standard, but the best underwater swimmers do a lot of work to get the most snap from each undulation, whilst keeping a tightly hydrodynamic body position. See Tom Shields, Natalie Coughlin, Dressel, and others.

Is there any easy way for ya’ll to provide a transcript to these interview?