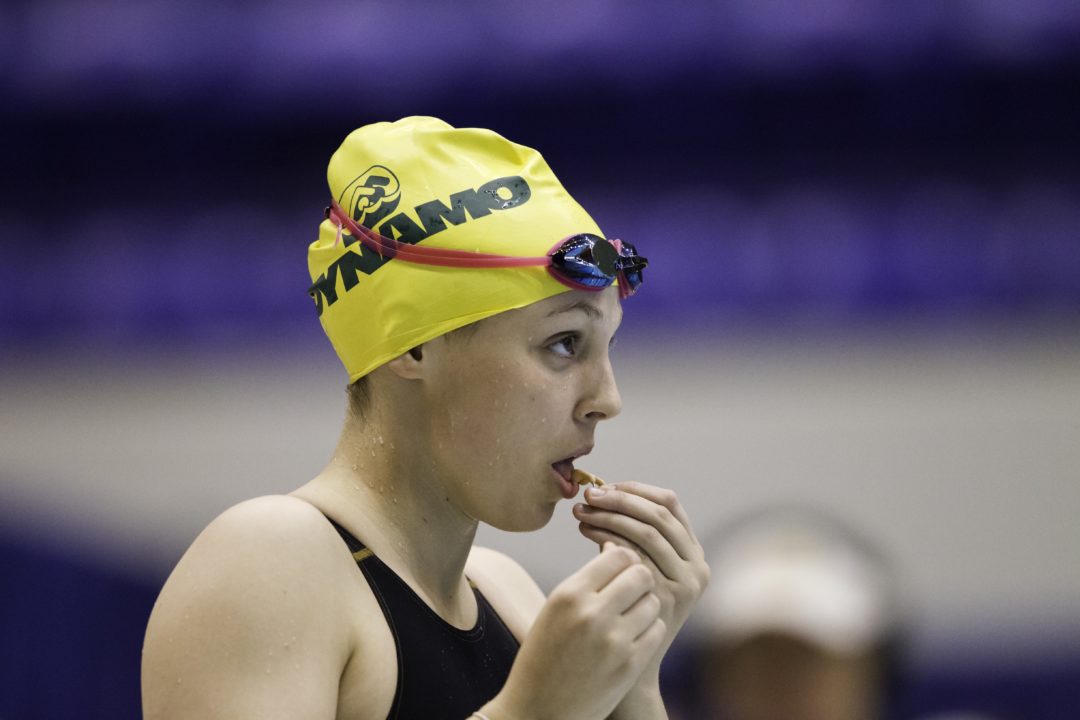 American Kylie Stewart ended up on podiums in Moscow both individually and as part of the American mixed 200 medley relay. (Photo Courtesy: ©Tim Binning/TheSwimPictures.com)

The American junior squad joined the FINA World Cup tour on Wednesday in Moscow, and they’ve certainly proved their readiness for international competition. The Russian hosts also showed up with quite a few big swims and podiums at this meet, as the previously-dominant Hungarians gave up a lot of money to new competition at this meet.

The USA juniors stamped their statement on this meet very early, with Leah Smith and Becca Mann battling it out until the very end. Smith’s 8:19.24 eventually besting Mann’s 8:19.33.  Though neither will take home any cash for their winnings, they’ve shown that they are much more than a novelty at this World Cup series: they’re here to contend for titles. Those two times, the two best in the world this year, were 10 seconds ahead of the next closest, Elizaveta Gorshkova of Russia.

For the first time this season, Katinka Hosszu not only was beaten in this race, but finished out of the money. Her 8:47.47 was well off of her pace at the past few meets.

The men’s 100 free podium saw several familiar faces from this circuit. Tommasso D’Orsogna of Australia went 47.11 to top South Africa’s Darian Townsend. Townsend tied with USA’s Anthony Ervin, abandoned his go-to fly and die strategy that we’ve seen at previous meets, going out in a 22.7 for a final time of 47.43.

D’Orsogna has now won this race at three consecutive meets. Russia’s Evgeny Lagunov was 4th in 47.76.

The top three were all very close in the women’s 200 free, with the Hungarian duo of Katinka Hosszu and Zsusanna Jacobos retaking their familiar spots at the top of the podium. China’s Jun Jun Guo rounded out the podium, with all three girls going 1:56s. That’s a little off of the pace of the leaders in the past three meets.

Italy’s Fabio Scozzoli took his first win of the series with a 26.51. He was followed by Russia’s Sergei Geibel in 26.74. For Geibel, who is 31 years old, that’s very nearly a lifetime best for him.

Rie Kaneto of Japan went 1:06.18 in the 100 breast to beat teammate Mio Motegi by .01. The two were nearly identical at the halfway mark, but Kaneto made up a minuscule deficit for the win. Russia’s Maria Temnikova of Russia was third in 1:07.55.

American Jessica Hardy was DQ’ed in prelims for not separating her hands prior to her dolphin kick, though she would dispute that claim after the race.

Japanese teen Daiya Seto, following up on what was nearly a World Cup Record in Stockholm, he won the 400 IM in 4:01.30. That’s just half-a-second from his own Japanese and Asian Records set over the weekendown Asian Record.

This time, Hungary’s Laszlo Cseh wasn’t able to hang with him this time, and got buried in the freestyle. Cseh still took 2nd though in 4:06.20, followed by Israel’s Gal Nevo in 4:09.90.

Italy’s Ilaria Bianchi won this event in a 57.18, breaking her own Italian Record by three-tenths of a second. After a sub-par swim in Stockholm to start her short course season, Bianchi exploded to win the race here. just head of Sweden’s Louise Hansson in 57.76. Veronika Popova of Russia got the bronze in 58.42.

Stanislav Donets of Russia, who has really gotten into the swing of things over the past couple weeks, won in a  49.74, nearly a full second ahead of Australia’s Robert Hurley. After finishing runner-up to Hurley in the race at each of the last two stops, Donets burst through to become the first swimmer of the year to dip under 50 seconds. Yuki Shirai of Japan was third in 51.47.

Rachel Goh of Australia has gotten quite comfortable with her top spot in the 50 backstroke, which she has occupied three times now in four meets on the circuit so far. On Wednesday she took the gold with a 26.87. Brazil’s Fabiola Molina, still fighting hard into her late 30’s, was 2nd in 27.51, followed by Shiming Chen in 17.68.

Japan’s Kazuya Kaneda won the 200 fly in a 1:52.43. Teammate Daiya Seto –who is probably the better butterflyer but had a quick turnaround after the 400 IM–was just six one hundredths behind him in 1:52.49.

Russia put another swimmer on the podium with a 1:52.63 from Nikolay Skvortsov. This was a very bang-bang finish, and Seto had easily the fastest last 50 to nearly run them all down, but just ran out of room.

World record holder Paul Biedermann won the event but was over 11 seconds slower than his world record in 3:44.00. Hurley was second in 3:44.62, and Evgeny Kulikov was well behind for bronze in 3:47.84.

Germany’s Britta Steffen was without her rival Therese Alshammar at this stop of the circuit, but with American Jessica Hardy rested entering her first swim of the finals session, Steffen didn’t exactly run away with this race.

Still, Steffen got off of the blocks quickly and won the race in 24.20: her second-straight strong time in the race. Russia’s Svetlana Knyaginina was 3rd in 24.76; she had a great long course season, but her short course season isn’t off to quite as good of a start.

American Sean Mahoney, with just a pair of bronzes to date in this 200 breaststroke so far, finally charged through the front lines with a 2:05.11 in the men’s 200 breaststroke for a big $1,500 prize. Japan’s Seto sat this race out here, but that doesn’t diminish the performance of Mahoney that was the best of his career and the second-best in the world this year.

Russia’s Vlatcheslav Sinkevich was 2nd in 2:06.06, with Germany’s Marco Koch 3rd in 2:06.39. Koch is seeing a bothersome backward trend in his times as this series has moved into Europe, as compared to last year where he accelerated through Europe and then hit the breaks back in Asia. Hopefully a home meet in Berlin later this week will revitalize him.

The battle that is developing between Kenneth To, the young diminutive firecracker from Australia, and George Bovell, the long, tall veteran from Trinidad & Tobago, is one of the most exciting individual-event duels we’ve seen in this World Cup series in the last few years. The pair have gone back-and-forth on this 100 IM, resulting in around a half-a-dozen times that rank among the 25 best swims in history.

This time, it was To who got back on top with a 51.66, again taking a huge front-half charge and daring Bovell to make the ground up coming home. Bovell was 2nd in 51.81. This is significant beyond just the individual battle for $1,500, as the winner of this event has generally come up with the most overall series points as well – which go toward the big checks after Tokyo.

New Zealand’s Melissa Ingram continued to look good in this 200 backstroke as she builds toward the Short Course World Championships, winning for the 2nd-straight meet in 2;05.35. The Americans put another junior swimmer on the podium with Kylie Stewart in 2:05.79.

In their first crack, the Americans won the 200 medley relay in 1:40.87. Stewart got a great experience training with three of the United States’ best, with Jessica Hardy on breaststroke, Tom Shields on fly, and Anthony Ervin anchoring the freestyle leg. Ervin split a 20.84 on the anchor, giving him good hopes in the individual 50 on day 2 of the meet.

FINA is not yet keeping World Records in this event, but unofficially this would be it, as it beats the Norwegians’ winning time from Stockholm by almost a full second.

Russia was 2nd in 1:41.34, followed by a Russian B relay in 1:43.11 (both without Stanislav Donets, who probably would have given the A-relay a very close finish or a win over the Americans).

The American B-relay of Gunnar Bentz, Sean Mahoney, Celina Li, and Michelle Cefal was 8th in 1:48.45.

kylie stewart has been very impressive. i hope she tapers for short course juniors so we can see what she is capable of in yards now!

I’m a fan of Allie Szekely but I think she’s disqualified too often. I hope she will show her talent in the 200 breaststroke final. Good race for Leah Smith and Becca Mann in the 800 free. After the junior pan pacs it’s another very close race between these 2 swimmers. I think this american junior team will make better in Berlin. Last year the second meet was much better for these young swimmers.
But don’t forget the level will increase in Berlin with Camille Muffat and Yannick Agnel in the water.

Why was Allie S. DQ’d in her breaststroke?