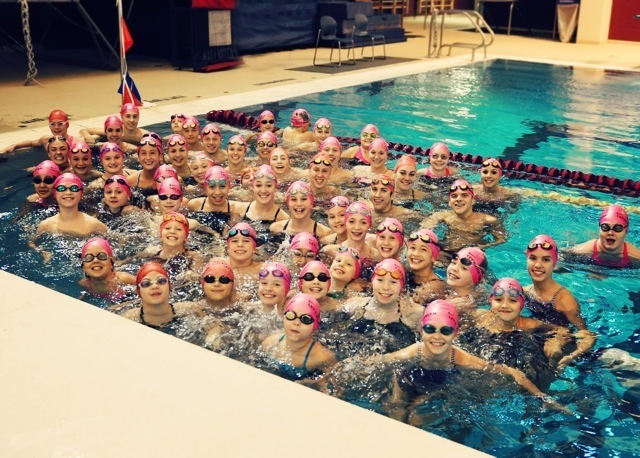 The Woodlands Swim Team in The Woodlands, Texas has been running a campaign of their own, called "Let's Kick Cancer," and have raised a whopping $3500 for a local breast cancer agency. Current photo via Payton Neff.

With October being Breast Cancer Awareness month, groups around the country have been pitching in with their own campaigns to help raise money and awareness for the cause. Swimming has been no exception – we profiled DART’s “Caps for Cancer” fundraiser earlier this month, but they’re far from the only swim team investing time and money in the cause.

The Woodlands Swim Team in The Woodlands, Texas has been running a campaign of their own, called “Let’s Kick Cancer,” and have raised a whopping $3500 for a local breast cancer agency.

The fundraiser sold pink swim caps, suits and shirts, with the proceeds going to Karen T. Stall Research and Breast Institute, a local non-profit. The team will be wearing the “Let’s Kick Cancer” gear for all of its meets and practices during the month of October.

Started by one of the team’s parents, the fundraiser is in its second year and has increased noticeably. The first season, the team only sold the pink caps. Adding the suits and shirts this year, the program raised $1500 more, nearly doubling the total donation amount.

Payton Neff, a sophomore breaststroker with The Woodlands, said the fundraiser has been a great bonding opportunity for the team.

“I think the fundraiser impacted the team greatly,” she said. “It has brought a sense of awareness to the team, as well as shown how teamwork can really pay off and have a positive impact on others as well as to an individual.”

The pink presence at Woodlands practices and meets will be overpowering – the team purchased 191 shirts, 140 suits and 200 caps between swimmers, parents and swim families. That noticeable presence on the pool deck is just another example of how swimmers across the country are working to extend their impact well beyond the pool.