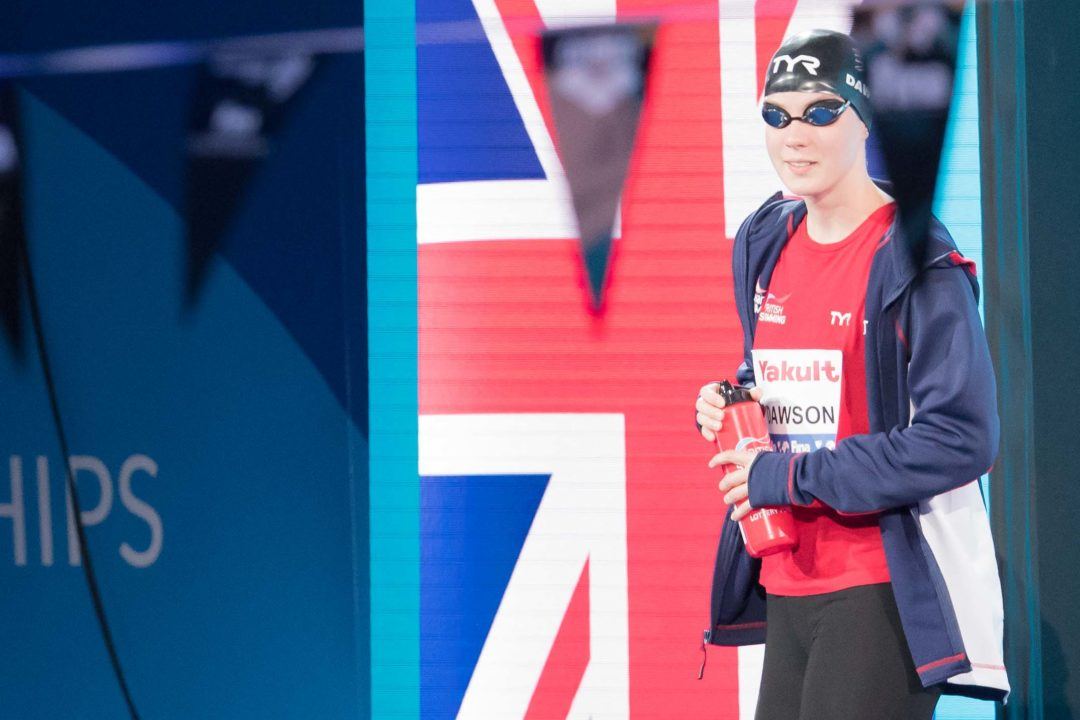 Kathleen Dawson won the initial race in a European Championship Record of 58.18, which will no longer count due to a timing error. Archive photo via Mike Lewis/Ola Vista Photography

The women’s 100 backstroke final at the 2021 European Championships will be re-swum due to an error with the timing system.

“The Organizers cancelled the women’s 100m back’s result, due to the failure of the timing system,” an official statement said.

Kathleen Dawson of Great Britain set what was a European Championship Record in the initial race in a time of 58.18, with Kira Toussaint of the Netherlands winning silver in 59.02 and Maria Kameneva of Russia earning bronze in 59.13.

SwimSwam received confirmation from the organizers that the times done in the original final are cancelled, meaning Dawson’s 58.18 Championship Record will not hold up. She still holds the record of 58.44 from the semi-finals.

According to reports, lanes 7 and 8, which was the Netherlands’ Maaike De Waard and Hansson, couldn’t hear the start.

After setting a Championship Record in the semis, Kathleen Dawson would not be denied tonight, winning the women’s 100 backstroke in decisive fashion in a new personal best and meet record of 58.18.

Dawson was the bronze medalist in 2016, and wins Britain’s first gold in the event since Gemma Spofforth in 2010. Dawson also missed Spofforth’s super-suited European and British Record of 58.12 by just .06.

Kira Toussaint, who had tied the initial CR of 58.73 in last night’s first semi, was never close to Dawson and takes the silver in 59.02, her first Euro LC medal in this event.

Maria Kameneva, who scratched out of the 100 free semis to put all of her focus on this race, wins the bronze in 59.13, just .03 off of her Russian Record set in April.

Defending champion Anastasia Fesikova was a distant sixth (tie) in 1:00.33.

Seems pretty unfair to Dawson since she clearly touched first. She has to win the title twice now?

It looks that way…..

Imagine if this happened at the olympics

What happened to hand timers and cameras as a backup?

Hand timers and cameras can correct for a finish malfunction, but not for an issue where some swimmers weren’t alerted to the start.

It is obvious that Hannson did not respond to the beep. I can see giving her another chance as the beep wasn’t a normal sound. I don’t know if the whole heat needs another round. Give Hannson a time trial that can factor into the medals but redoing the whole heat seems unnecessary.

It’s a race but not a time trial. And race does has its specific. The RACE should be fair to all finalist. Don’t you think that seeing yourself well behind everybody from the very beginning affects negatively your performance. And vice versa.

At least we can finally get a satisfying answer to the question of “if you swam the race x times, the result will be…”

This is a travesty. Let Hannson re-swim.