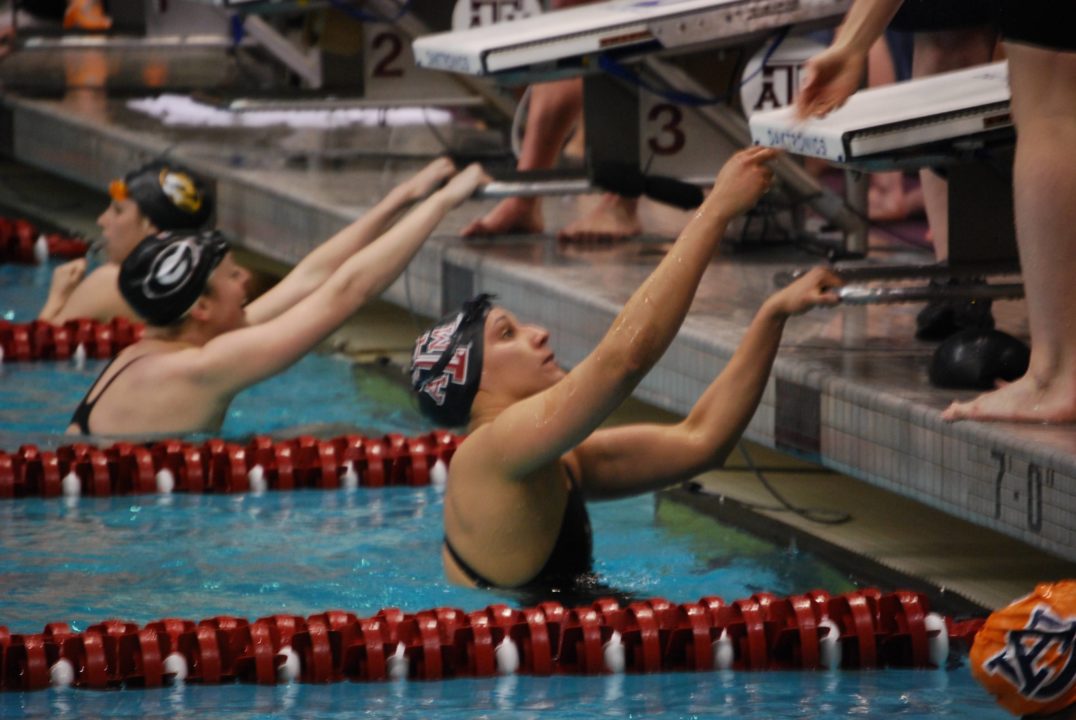 The Texas A&M women charged back to take the lead from Stanford, while the Aggie men added to their already-sizable margin. Archive photo via Janna Schulze/SwimSwam.com

After the Stanford women stole the show at Thursday night’s session, the Texas A&M women returned to the pool Friday resolved to provide some fireworks of their own. The Aggies won four events, three of them NCAA “A” cuts and one of them an A&M school record, to take the lead away from Stanford with one day of racing remaining.

The meet kicked off with the women’s 1m diving, where LSU got on the board with Alex Bettridge‘s winning 309.55-point performance. Stanford took the next two spots, with teammates Kassidy Cook and Stephanie Phipp scoring 298.85 and 291.70 respectively.

The Stanford women kept the “A” cuts coming, winning the opening 200 medley relay and blowing away the A time standard of 1:38.01. The team of Felicia Lee, Sarah Haase, Nicole Stafford and Maddy Schaefer went 1:36.79 to get in just ahead of Texas A&M, which also put up an A time in 1:36.97. Stanford got a huge 24.14 leadoff leg from Lee and closed the relay with a 21.55 from Schaefer to hold off the Aggies, who made kept things close the whole way. Breeja Larson was 26.95 on the breaststroke leg for A&M, and Paige Miller did an admirable job hanging with Lee on the backstroke, splitting 24.38.

Maya Dirado continued her string of gigantic performances in College Station, going an eye-popping 4:00.88 to win the 400 IM. For reference, that’s almost 5 seconds below the A cut, and is just .4 off of Elizabeth Beisel’s NCAA Championship time. She blew away a field that included a solid swim from returning NCAA finalist Cammile Adams. Adams went 4:07.04 to take second place for Texas A&M. Stanford’s Andie Taylor took third in 4:09.39, a season-best for her by a longshot.

One thing that might be getting overshadowed at this meet by Stanford’s brilliance is the fast swimming of Texas A&M. The Aggies are having themselves an awfully nice meet in their home pool, and for evidence of that, look no further than Paige Miller‘s 52.37 100 fly win. That time was faster than Miller went at NCAAs last year, although it’s still a few tenths off of her lifetime best posted at the 2013 SECs. The senior beat Stanford star Felicia Lee in a tight race. Lee was 52.46 for the Cardinal, followed very closely by Cammile Adams, who went 52.64 in her second of back-to-back events for the Aggies. Even with that tough double, Adams had the fastest back-half split of the field, and it wasn’t close.

A&M kept the fast swimming coming in the 200 free, where Liliana Ibanez went 1:43.75 to beat Stanford in another close race and give the Aggies their first individual NCAA “A” cut of the season. She was down a full second and a half to Lia Neal at the 100 mark, but clawed her way back in and went by Neal on the final length. Neal also got the A cut in 1:43.86. Stanford’s Julia Anderson was third, going 1:45.55 followed by two Aggies, Meredith Oliver and Sammie Bosma, who went 1:46.34 and 1:46.88 respectively.

After a brilliant prelims performance of 58.29, Breeja Larson put up another strong swim at night, going 59.07 to win the 100 breaststroke. Those two times were both A cuts for Larson, the defending NCAA champ and record-holder. Larson is not only the only swimmer in the NCAA to go under 59 this season, she’s the only one to break one minute so far. Stanford’s Sarah Haase got in for second place, going 1:00.35. Behind her was A&M’s Ashley McGregor, who was just .04 off her lifetime best, going 1:00.40.

The 100 back finished up much the same way as the 100 fly, with A&M’s Paige Miller beating out Stanford’s Felicia Lee as both women swam A cuts. Miller was 51.36, Lee 51.46, both were lifetime bests and both would have placed second at last year’s NCAA championships. Miller also broke her own Texas A&M school record during the event. Stanford’s Maddy Schaefer continued her strong performances this weekend, shaving a half-second off her best time and taking third in 52.30.

After four consecutive A&M wins, Stanford finally got back on top, winning the 800 free relay to close the night. The Cardinal blew away the NCAA A cut, with the team of Maddy Schaefer, Maya Dirado, Felicia Lee, and Lia Neal going 6:58.57. All four women were fast, but particularly notable was Dirado’s split of 1:43.6. Results of other meets are still coming in, but Stanford looks to become the first team in the NCAA this season under 7 minute. The Aggies got an A cut of their own, with the relay of Meredith Oliver, Sarah Henry, Sammie Bosma and Liliana Ibanez going 7:07.02 for second place.

After that run of 4 individual event wins in a row, the Texas A&M Aggies leapfrogged Stanford in the team points, and now will to hold onto its 38 point lead through the final day of racing tomorrow.

TCU took the 200 medley relay to open the night, going 1:28.17. The team of Cooper Robinson, Ford Story, Adam Szilagyi and Josh Mangus endured a hard-fought battle with Texas A&M. LSU finished third with two of the more impressive splits of the event, butterflyer Frank Greeff in 21.28 and freestyler Marco Gonzalez in 19.44.

Henrik Lindau won the 100 fly in 46.52, the fastest time in the nation so far, pending results of other invitationals this weekend. That time isn’t an A cut, but has a good chance of qualifying him for the NCAA Championships, based on the invite times from previous years. Frank Greeff of LSU finished second, going 47.27, and Air Force star Ryan Dunne was third in 48.07.

TCU’s Cooper Robinson won the 100 backstroke, going 47.34, the second-fastest time in the NCAA this year pending this weekend’s results. He’ll probably need at least another half-second drop to qualify for his first NCAA championships, but this swim has to be exciting for the Horned Frogs coaching staff in mid-November. He beat Aggies Henrik Lindau, who went 48.11, and Alexandros Theocharidis, who went 48.16, as well as LSU’s Michael Young (48.25) and Air Force’s Angus MacDonald (48.49).

The Aggies won the 800 free relay to conclude the evening, going 6:31.59. The relay included Mateo Muzek, Luke Shaw, Hunter Funk and Paul-Marc Schweitzer. Muzek led off in 1:38.86 and the other three were all 1:37s. Air Force took second, holding off a late charge from TCU. Both relays were 6:35 on the night.

After two days of racing, Texas A&M has extended its points lead to over 200. LSU sits second. The teams will be back tomorrow for the finale of the 2013 Art Adamson Invitational.