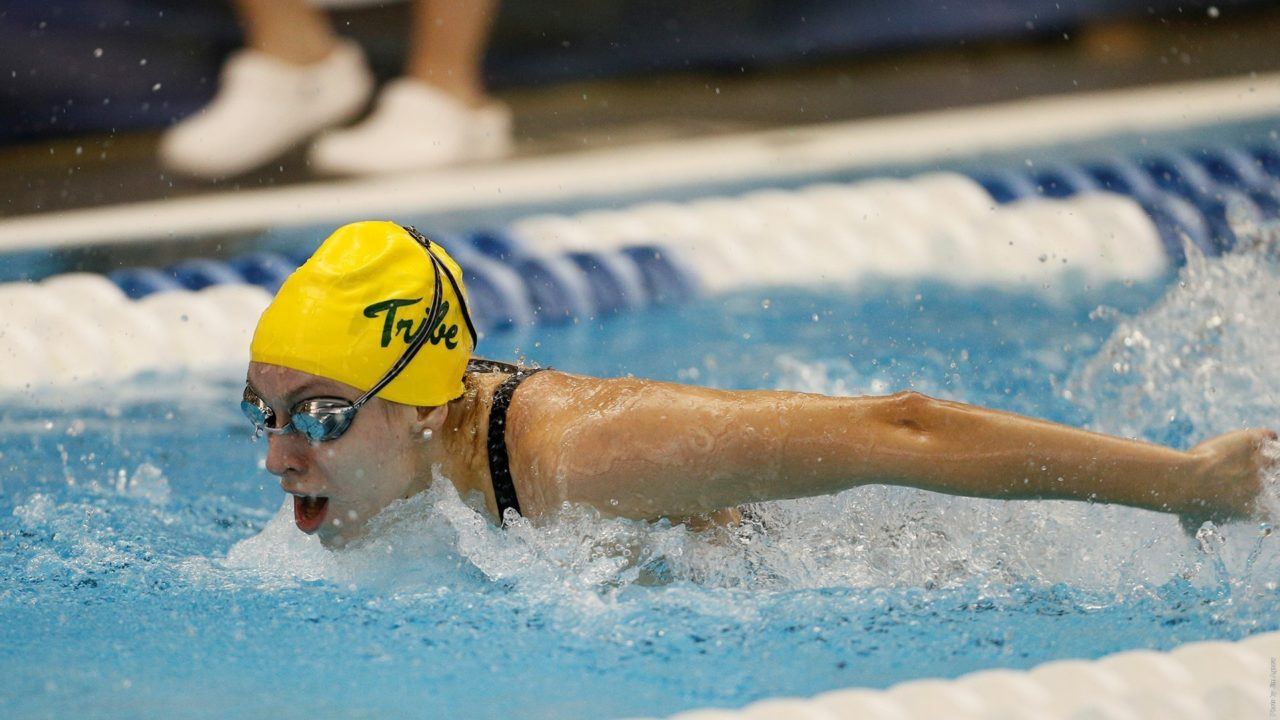 The William & Mary women’s swimming team got back on the winning track Sunday, cruising past Delaware 144-77 on the second day of the JMU Duals.  The Tribe improved to 4-5 on the year and 1-2 in the Colonial Athletic Association, while the Blue Hens fell to 1-5, 0-2 in league play.

W&M won every swimming event on the day except for the 400 free relay, where the Tribe had the best time but exhibitioned all teams with victory already assured.  Leading the way was junior Jess Crowley (Acton, Mass.), who won both of her individual events.  That began with a school-record performance in the rare 100 IM, where Crowley touched the wall first in 59.54 seconds.  That was W&M’s first-ever sub-60 performance in the event, and broke the record of 1:00.43 set by current senior Allie Christy (Williamsburg, Va.) almost two years ago to the day against Duke.  Crowley then came back in the final event of the day to take the 50 breast in 29.94 seconds.

William & Mary has this week off, but will return to action Nov. 17-19 at the Hokie Fall Invitational.

HARRISONBURG, Virginia – UNCW’s men’s and women’s teams combined for an impressive 22 events wins as the Seahawks sailed past Delaware, sweeping the Blue Hens in a dual meet at the Colonial Athletic Association pod meet at the Savage Natatorium on Saturday.

With the sweep, the Seahawks improved to 3-0 and 2-0 on the women’s and men’s sides, respectively. UD’s women’s team dropped to 1-3 with the loss while the men fell to 1-2.

“We put together our best day of racing so far this season,” said UNCW Head Coach Jason Memont, who is in his third season at the helm. “From top to bottom our team did a great job executing and finishing their races. There were a lot of close events today and our swimmers were able to get their hands on the wall first. Will Ryan, Jack Cosgrove, Tad Spence and Connor Forsythe paced the men very well with multiple victories. On the women’s side, Kyra Schemmel and Meg Lahr continue to lead the way for our team.

Freshman Jack Cosgrove picked up wins in the 100 and 200 Free while also swimming the second leg of winning 200 Free Relay. Sean Cannon, another freshman for the Seahawks, won the 50 Free swam on both winning relays, 200 Medley and 200 Free, and added a second-place finish in the 100 Free.

Kyra Schemmel, a sophomore, picked up wins for the women’s team in the 200 and 500 Freestyles. Freshman Caroline Knowles added a win in the 100 Backstroke and swam the leadoff leg of the winning 200 Medley Relay.

Senior Tad Spence bolstered UNCW’s win on the men’s side with wins in the 100 and 200 Backstrokes and swimming the opening leg of the 200 Medley Relay.
Adding individual event wins for UNCW were Meagan Johnson (400 IM), Kathryn Ostrom (100 Breast), Connor Forsythe (100n 200 Fly) and Kayla Hunter (200 Breast).

On Sunday, the Seahawks will take on longtime rival East Carolina in a men’s dual meet while the women will swim against James Madison. Both meets are set for 8:30 a.m. at the Savage Natatorium.

“I couldn’t be more proud of the way everyone has responded to the hard work and stayed aggressive in their racing this semester. I am looking forward to getting back in tomorrow morning and racing again.”

HARRISONBURG, Va. — The East Carolina men and women’s swimming and diving teams wrapped up the dual meet portion of its fall schedules with a pair of victories Sunday afternoon as the men posted a 132-97 victory over UNCW and the ladies defeated Delaware 122-98, as part of the CAA Pod Meet.

With the victory, the ECU men improved to 3-1 this season and women upped their record to 4-2.

Other individual ECU winners included Yara Fakhry (200 IM), Vendela Norrman (50 Breast), Lajoie (1650 Free) and Svanbergsson (50 Fly) along with diver Alicia Roueche, who won both the one and three-meter events.

ECU returns to action Nov. 17-19 at the Georgia Tech Invitational in Atlanta

HARRISONBURG, Va. — The University of Delaware men’s and women’s swimming and diving squads closed out the weekend at the Colonial Athletic Association Pod Meet Sunday afternoon at James Madison University.

Delaware captured six first place finishes in the pod meet led by a pair of freshmen divers. Aaron Nolan won both the one-meter (163.80 points) and three-meter (179.40) events for the men while fellow rookie Emma Larson won both events, taking the one-meter with 148.10 points and the three-meter board with 136.75 points.

On the women’s side, Delaware posted three individual third place finishes led by Julia Capobianco in 50 butterfly (26.36),  Alyssa Santangelo in the 50 backstroke (27.96), and Madeline Maher in the 50 breaststroke (30.32).

Both Delaware teams will return to action this Saturday, Nov. 12, when they host La Salle in a dual meet at Rawstrom Natatorium.