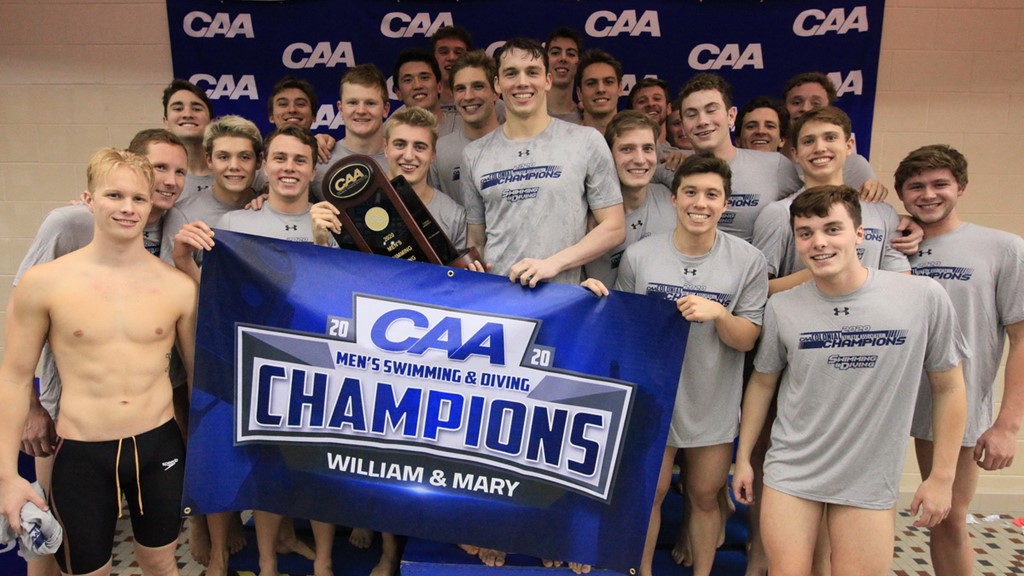 The College of William & Mary's men's swimming team will be back in 2021-22 after getting cut in early September. Archive photo via CAA

The College of William & Mary will bring back the men’s programs that were cut, including swimming, the school announced Thursday.

The four male programs that were slashed — swimming, gymnastics and indoor and outdoor track & field — will remain for the 2021-22 NCAA season, but their future beyond then is still up in the air.

The announcement made by school President Katherine A. Rowe says that the university will “reset its process to determine long-term sustainability” for William & Mary Athletics, and that the men’s teams “slated for reclassification will continue as Division I sports through at least 2021-22, in order to take a phased approach that allows for a gender equity review paired with exploration of alternative solutions leading to a long-term financial plan”.

William & Mary announced it was cutting seven sports, including both swimming programs, on September 3.

On October 19, news broke that the school would reinstate the three women’s programs that were removed in order to avoid a potential Title IX violation. Those programs were swimming & diving, gymnastics and track & field.

The women’s track & field team then came out and said they would not represent the school until the men’s team was recovered.

This decision follows a recommendation made by interim Athletics Director Jeremy P. Martin, who concluded that the school needs to find long-term solutions in “equity, financial sustainability and excellence”.

“Since early last month, we have been engaged in a conversation about how to structure William & Mary’s Division I athletics offerings in a way that is equitable, financially sustainable and excellent,” Rowe said. “I appreciate that this has been an especially painful time for the students involved in the sports cut on September 3rd to endure.”

Martin suggests establishing defined fundraising goals for each team, along with the athletics department completing their review of gender equity before determining how many programs the school can realistically support. Ultimately they plan to establish “a sustainable program that will achieve gender equity” for the 2022-23 academic year.

“His recommendations address the reality that the athletics community needs time to confront together forthrightly: a status quo that is unsustainable with respect both to finances and mission,” added Rowe.

In terms of the swimming programs specifically, the cost to fund the teams isn’t a significant amount. In total the combined program has about $450,000 in operating costs, according to alumna Jaimie Miller, including coaching salaries, benefits and travel.

Martin took over as the Interim AD on October 6 after Samantha Huge resigned. Upon taking over the role, he began reviewing the plan put forth when the cuts were initially made on September 3.

Upon realizing the school would not meet Title IX standards, he had the women’s programs restored in mid-October, and after a closer look into the men’s programs, determined more time was needed in order to “consider the best path for W&M Athletics going forward, in order to rebuild confidence, explore potential financial support and develop broader understanding of the challenges faced”.

“My review made it crystal clear that the Sept. 3 rollout and the subsequent identification of flaws in the plan’s proposed implementation of the gender equity component led to legitimate questions within the W&M community,” Martin said. “We should bring the same thoughtful, phased planning and execution the university used in dealing with COVID-19 to the challenges facing W&M Athletics. The next year and a half will give us the opportunity to do just that.”

Rowe and Martin both acknowledged that while there is still much to be done, this move will help the school get back on the right track.

“Going forward, William & Mary Athletics cannot fulfill its commitments to provide an equitable and excellent environment for learning and competing in Division I, under its prior financial model,” Rowe said. “Director Martin has outlined a clear and hopeful path to achieving those essential goals with an operational footing that could be sustainable beyond 2020, if the milestones the department will establish are reached.”

Martin added: “There is a great deal to be done, and the time for us to step up and work together on shared solutions is here. I am getting to know our incredible student-athletes, coaches and staff, and I have seen the passion our alumni have for our programs. I am confident we will be able to move forward together and emerge even stronger.”

Back to back SaveTribeSwimming champions. We were cut in 1991 then reinstated. We were cut in 2020 and now reinstated. The passionate, talented, vocal, and engaged Tribe Swimming Alumni remain undefeated. So is our Men’s team in the conference championships the past 6 years.

This is an incredible team and I am proud to be part of it.

Congratulations! Fantastic news for W&M, the CAA and college swimming! The Tribe is back and here come the Seahawks…. Get your popcorn!

I’m sure even Ol Longhorn is happy about this. As I have said before this really is a program that should continue! A great example of what is good about our sport.

Crap… they should’ve been cut.

Great news but have to wonder what this does to recruiting. It’s gonna be a hard sell for coach Kellogg -great school, great team, may not exist in a year but please commit anyway. A few down years in recruiting can set even a great program back quite a bit.

For sure – not helpful. But baby steps. This was first step. At least now you don’t have the whole team transferring right now.