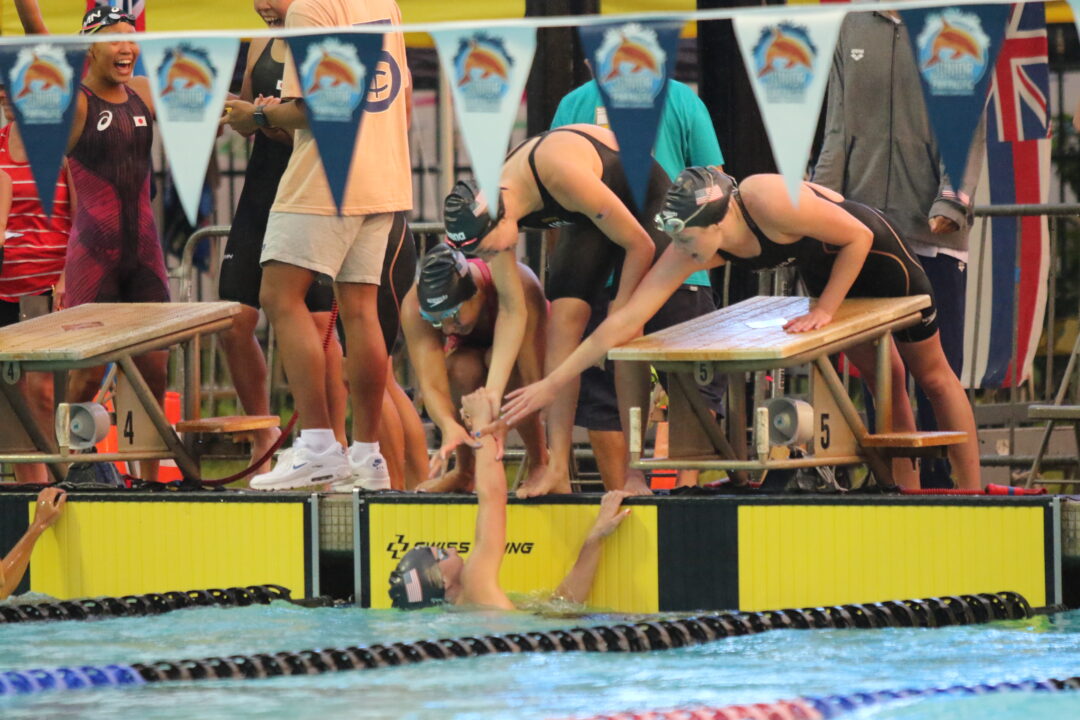 2022 was a hectic summer of racing in the pool as we made up for lost time after a flurry of competitions were postponed as part of the ripple effect of the Tokyo Olympics getting pushed back by one year.

As a result, we had the three major international junior meets on the swimming schedule—World Juniors, European Juniors and Junior Pan Pacs—all occurring within a two-month span in July and August.

Athletes from European countries had the opportunity to swim in two of the three meets (World & Euro Juniors), while Japan marked the only top-tier team in attendance at Pan Pacs to also take on World Juniors (which were only one week later).

With all of the meets now in the books, it’s a good time to take a look at the results of each competition and see how things shake out if we put together a theoretical top eight, offering a glimpse of who the best junior swimmers in the world are right now.

It’s important to note that the times used were only from individual finals. If a swimmer raced at two of the meets, only their faster time was considered.

Another important distinction is the difference in age requirements and how that directly impacts the results. Particularly so on the girls’ side, where the cutoff for Junior Pan Pacs was 18, and the other two were 17. Based on the results, this had a big effect on making the Pan Pac female results quicker overall.

*indicates the swimmer is born in 2004 (18 or turning 18 this year), meaning they would be ineligible to compete at either World Juniors or Euro Juniors

There was also no mixed 4×100 free relay at Junior Pan Pacs.

topic is relatively valid, some countries were not allowed to attend EJ WJ, right? Different events, pools, competitors, nothing is the same, eg, EJ was start of July, WJ begin of Sept, so athletes had to stay on train program for 2 months during summer, so difficult, while Junior Pan Pacs had only that event as pick one.
So theoretical hypothesis with this subject.
Also many juniors competed on Senior EC or WC eg Pilato, Macintosh etc…
Hoping next year US AUS JPN SNG UK etc ..will put WJ ahead of Pan Pacs, so this will be event and they all meet there to see who is the fastest and who gets the medals.

It is clear that in the girls due to the age difference there is a huge dominance of US. However if we take out the result of the non-junior swimmers the US would have had only one gold medal, meaning that they would finish only 4th or 5th overalls. I am just wondering if it was another country would have SS excluded them🤔

Most overlooked NCSA in Indy had some fast times too.

Otherwise, it just becomes a “world junior rankings,” which is interesting, but not the goal.

Brutal difference for the hungarian team on the women side, but nothing new at all…
USA and Australia and right know Japan are miles away.

And the lonely hungarian male swimmer with a medal, is named Mészáros Dániel.

Don’t be so hard on Hungarian junior swimmers, no question they all poured their hearts into their swims and to read your comments would be heartbreaking for them. There are many ways you can show vocal patriotism but I don’t believe your words would be constructive to a positive outcome for those athletes you are writing about. Please think before you type.

If you want a good news “Hungarian” story, follow along for the World Junior Open Water in the Seychelles next week, I am sure you will have something positive to cheer about there….one of the brightest talents at that event will be a young Hungarian.

I am not so hard, not even hard, but none of their seven golds would have happen in a normal junoir worlds.

I dont care about the open water, even have a really bad opinion about Gábor Gellért.

David Betlehem is quite talented, but doesnt have a chance againts swimmers like Greg or Florian, he is just to small.

I feel only an elite level athlete could have such high expectations of other elite level athletes to think that a top 8 IN THE WORLD age group athlete is “miles away” (using your words). If you care to divulge the last time you were ranked within the top 8 in the world, I may have a different level of respect for your words? (Otherwise my opinion stands).

Greg won’t be in the swim for ever, Betlehem has age on his side and has earned a lot more respect than what you are showing.

PS: your hook has no bait left!!

The swimmer’s name is Tiana Kritzinger, not ‘Tia’.

A real Distance Freeslayer in Australia.

To be fair JPPs is still the faster competition if you eliminate the the non juniors because most of the next best are also from JPPs and what makes it even worse is JPPs didn’t even include stroke 50s.

It would make a significant difference in relays. Without the two senior swimmers US would not be on top 3, and Hungary would have been higher rated too. Same goes for girl’s free, IM…

4×100 medley (mixed)
Only has junior swimmers so nothing changes.

4×200 free
Might fall to fourth but only because Weinstein, Grimes and Sims
weren’t eligible because they went to WCs. If they had those three they’d crush everyone worse and possibly break the WJR.

4×100 medley
They’d still be first using Moesch instead of Gemmell.