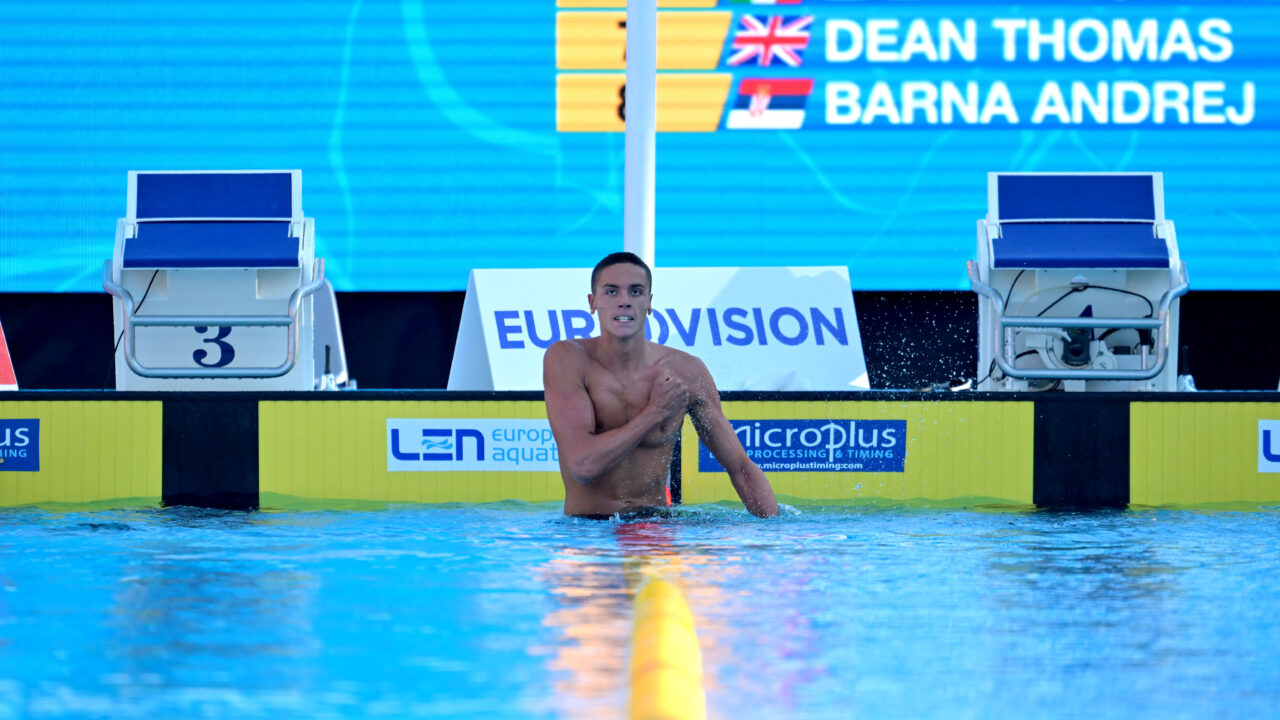 On the heels of a perfect LC season, David Popovici joins an exclusive list of swimmers who have held both the World and World Junior titles at the same time. Archive photo via Fabio Cetti

Additionally, he became one of the few swimmers to hold junior and senior world long course titles simultaneously. It is a very short list, as shown by Swimming Stats’ Instagram.

(In fact, Meilutyte is the only swimmer in history who won the World, World Junior, European, European Junior and Olympic Youth titles – the latter is the one Popovici has not won.)

The World Junior Championships debuted in 2006, and have occurred during the same year as the World Championships every year since 2011 (the last six editions).

Of course, it is much harder winning the titles in the same year, since it’s extremely rare to see a junior-aged swimmer become a world champion. That’s why this is another amazing achievement set by David Popovici.

David Popovici has the “DNA”/potential to be the greatest (freestyle) swimmer af all times; surpassing even the great Michael Phelps!

How is this even relevant to the article?

Truly the worst commenter on this site. This comment legitimately made me mad. (Which I’d be disappointed in myself about if I thought I was got by a troll, but I think those are actual awful takes.)

and you’re right, truly awful takes; like if you’re gonna take the time to spell out the full name of every event to make yourself seem smarter, at least have good opinions LMAO

Mr Wikipedia has failed to make any meaningful contribution to the comment section on https://www.swimswam.com/ in the calender years twenty-twenty

Mr Wikipedia has failed to make any meaningful contribution to the comment section on https://www.swimswam.com/ in the calender years twenty-one

Mr Wikipedia has failed to make any meaningful contribution to the comment section on https://www.swimswam.com/ in the calender years twenty-two

Honestly, this is the best comment of 2022 so far.

There are several World and Olympic Champions who were as young or younger than 17 but they pre date the World Junior Championships. So while this is a tremendous accomplishment the list would be much much longer.

Yeah this stat is nice but seems a bit pointless. A junior who wins at World Champs is infinitely more impressive than a junior who won juniors and then three years later won world champs when no longer a junior. So I think your list would be the more impressive one.

Michael Phelps was the youngest man, at age 15. One of Muir’s countrymen, a man by the name of Jeremy Reingold, claims to have set the 200 IM world record in 1980 at the age of 12. This was posted on Wikipedia and repeated by US Swimming and Swimming World, among others. Thing is, this is a total hoax.

My Uncle Mike Setchell was a leading swimming coach in South Africa who coached Jeremy Reingold at the Vineyard Swimming Club as we lived in Cape Town for 4 years too and we’re also members. I recall the celebration when he broke the world record but believe the date was incorrect and he was somewhat older .The error is likely in the data capturing. He was undoubtedly the naughtiest bugger and most talented .Mike returned to New Zealand some 10 years later.

Reingold was a top swimmer competed against him in Germany. Weltmeister. Jelosy

Reingold was one of the best swimmers in South Africa .I agree there may be a date error but the achievement is beyond question. Maybe you don’t like South Africans. Evidently you don’t have much support

I think she was 12 when she broke her first world record, Jenny Turrall was 13.

Who are the others male juniors who held a WR? (Except for Thorpe and Phelps)

7
0
Reply
Rafael
Reply to  Noone

Peirsol was 18 when he broke the 200 back WR (although he did it in the year he turned 19, so wouldn’t count under WJR rules).

Going back further, there’s of course Mark Spitz, who broke a whole bunch of WRs at 18

2
0
Reply
ecoach
Reply to  Noone

Alex Baumann was 17 in 1981 when he broke the 200 IM record. He then won both the 200 and 400 IM at the 1984 Olympics both in World Record time. If not for fighting constant shoulder problems he would have been even greater. In today’s world with the sports medicine advances and professional swimming he would have been unbelievable. He made the 1980 boycotted Canadian team. At the meet in Hawaii the US put together for all the Olympians who didn’t get to go to the Olympics he won the high point trophy at 16. Greatest male Canadian swimmer ever!

Is Popovici the youngest 100 m men’s world record holder in the last 50 years? When did someone younger than him hold the record? Honest questions.

If we go even earlier, another Romanian born swimmer, a.k.a Tarzan, broke the first of his many WR at 17 and 4 months (- a few days). Will ChlorineDaddy impersonate Count Dracula on screen one of these days?

he wasn’t Romanian-born. It was Hungary at the time.

Was Popovici the only one who won a senior title before the junior one?

Nah. Ruta’s senior title came first. In all years where the meets have been in the same year, World Juniors has come after World Aquatics Championships.

So Popovici and Ruta are the only ones.

She was also the reigning Olympic Champ, too. A MUCH shorter list. KL could have done it but the US doesn’t allow Sr. Champions to go to Jr. Championships. So could have Mary T and Tracy Caulkins but no ‘80 Olympics for them.

Mireia Belmonte won 400 free and 400 IM golds at 2006 junior Worlds, but not at the same event in which she won senior world gold.

This is an article about being world junior and world senior champion simultaneously. Dressel may have won 2013 junior worlds but did not win senior worlds in 2013 (James Magnussen) or 2015 (Ning Zatao).

Dressel won the 2013 juniors with a 48.97. That time would not have even made finals at the normal WCs in 2013. In fact, he would have been ranked 15th after the semi-finals.

Someone didn’t read the article