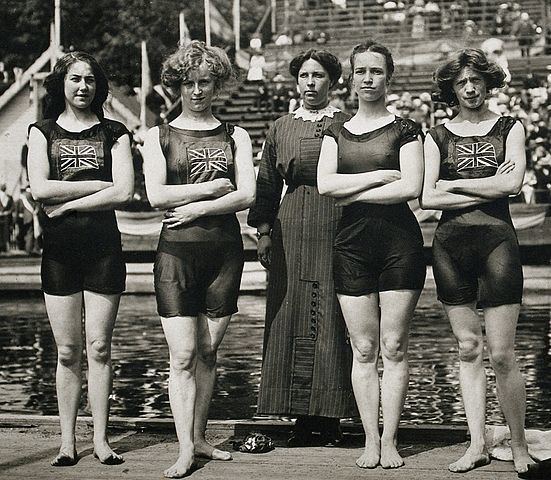 Let's take a bit of a break from wondering what 2016 will bring by looking back to what our swimming lives would have been like 100 years ago. Current photo via Bundes Archive

The majority of SwimSwam readers believe Regan Smith made the correct decision in opting to turn pro and join Bob Bowman in Arizona.

The new year beckons us to look to the future with bright eyes, and let’s face it, 2016 is going to be a big one. But, as we set goals and make resolutions to improve ourselves as swimmers and members of the swimming community, it can be fun to look back and see how far we’ve come. So, let’s take a minute to travel back to the mystical land of 1916 and put ourselves in our swimming predecessors’ shoes… or flippers… or maybe just their bare feet.

100 years ago, while our more leisure-minded family members and friends stuck to wool swimwear, which could weigh up to nine pounds when wet, we competed in silk. Both men and women wore full-body suits, which actually looked more like our modern race-day wear than you would think. The silk immediately became transparent when wet, so we had to make sure to wear underwear underneath for modesty (see above picture of the 1912 Olympic gold medalist, world record setting British 4×100 team).

Speaking of modesty, in 1916, it had been only nine years since Australian swimmer Annette Kellerman was arrested in Boston for indecent exposure on a beach in the below suit.

Also in the name of modesty, American women were not allowed to swim in the 1912 Olympics, the first Olympics to sponsor women’s swimming. However, by 1916, the New York Times reported that women’s swimming was no longer “a curiosity or a sensation … but a firmly established and recognized athletic activity, which both contestants and the public take seriously.”

As pool swimmers, we didn’t wear goggles in 1916 (and we wouldn’t start to wear them consistently for 60 more years), although we did wear caps made from silk or rubber, complete with a chin strap. Thomas William Burgess was the second person to cross the English channel in 1911, and he did so swimming the 60 miles almost entirely breaststroke. He also was the first swimmer to wear goggles when he accomplished the feat, repurposing an old pair of motorcycle goggles as a leaky makeshift solution.

Thomas Michael Burgess circa 1911 via Wikipedia

100 years ago, we would not be able to compete on a world stage because the 1916 Berlin Olympics were cancelled due to the outbreak of World War I.

100 years ago, film was in its early stages, and, although there was obviously no live stream, video from swimming events in the 1910s is available online.

Duke Kahanamoku circa 1912 via Wikipedia

The world records that were quite a bit different, although fitting with the technique and technology of the day.

By looking back on our swimming ancestors from 100 years ago, we can see that we have definitely come a long way. But, the most amazing thing about the swimmers of 1916 is the amount they were able to accomplish with such primitive technology, technique, and training.

2016 will feature some mind-blowing swims from the big names and overwhelming surprises from underdogs. It will be a year to remember. And, one hundred years from now, when posterity looks back at the year of 2016, we can only hope for than for them to think, “Wow. Look at what they were able to do with what they had.”

thanks, this really helped

And they are very nice athletic specimens at that , as are everyone’s else’ pictured. As a self appointed judge of male legs , i give Mr English Channel top marks -perhaps the best set ever on an Englishman.

You might want to reflect that whilst Annette & Fanny were international swim stars they were also leading rights advocates in a time American women were not allowed by their men to even be there. Bullies!

Also Fanny & Annette had the right to vote & both went on to be leading figures for further female rights .Annette developed an aesthetic physique program & Fanny’s political fights earnt her one of the nicest pool complexes in Sydney -The Fanny Durack Aquatic… Read more »

Great article. I learned a lot and enjoyed every word.