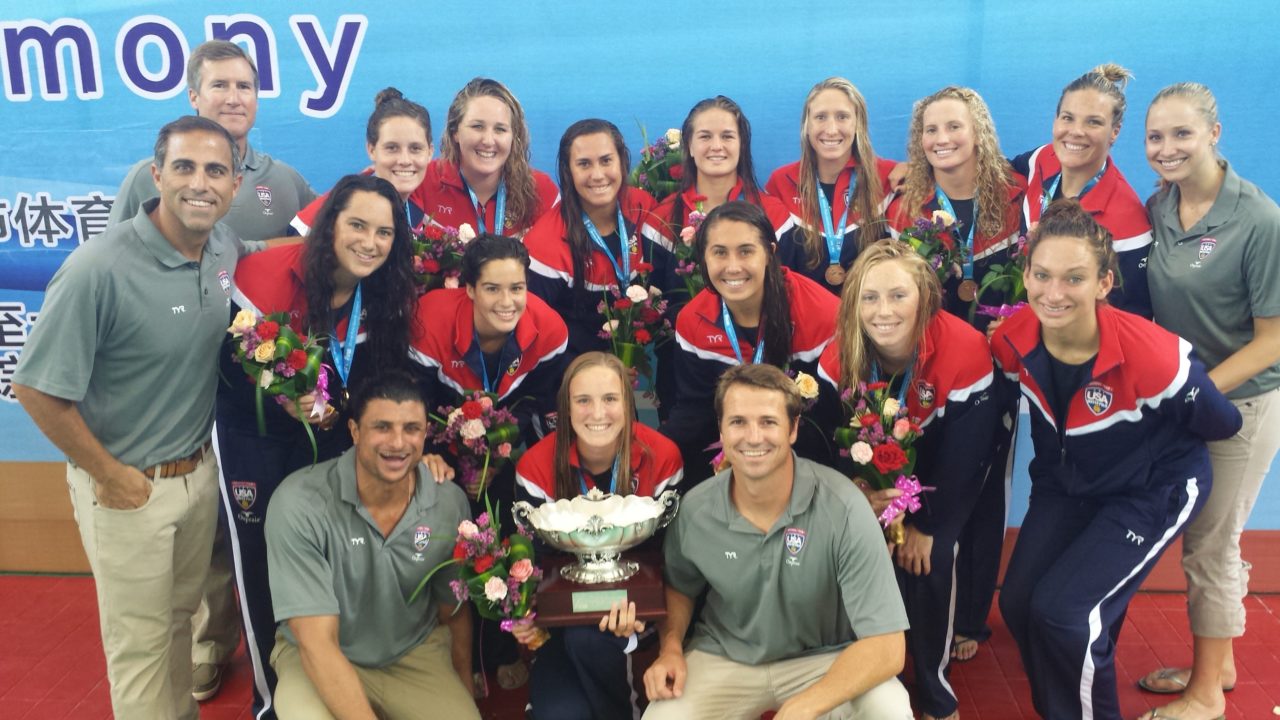 The following is a press release courtesy of USA Water Polo:
Kunshan, China – June 15 – The USA Women’s Senior National Team won gold at the 2014 FINA World League Super Final following a 10-8 victory over Italy. Behind three goals from Maggie Steffens (Danville, CA/Stanford/Diablo) and seven saves from Sami Hill (Santa Barbara, CA/UCLA/SBWPF), Team USA picked up their eighth Super Final gold medal in 11 opportunities. Team USA finished the tournament undefeated. After topping Russia in a shootout the United States went on to beat Canada, Spain, Brazil, Australia, and Italy with no match closer than two goals. The championship match streamed live on FINA TV, to watch a replay of the game click here. Italy came out with a strong start in this match taking a 2-1 lead after the first quarter before the United States was able to rebound with three goals in the second period to even the match at 4-4 at halftime. The tide changed in the third period when Team USA blanked the Italians 4-0 to take a commanding 8-4 lead going into the fourth quarter. Italy looked to rally in the final eight minutes scoring four goals of their own but the United States had the answer with two additional goals to pick up the 10-8 victory. Rachel Fattal (Seal Beach, CA/UCLA/SOCAL) and Annika Dries (Laguna Beach, CA/Stanford/SET) helped bolster the offensive attack with two goals each. The United States went 3/9 on power plays and did not attempt a penalty while Italy was 4/8 on power plays and 1/2 on penalties. USA center Kami Craig (Santa Barbara, CA/USC/SBWPF) left the game early with a laceration on her hand. “Our youth showed in the beginning but we settled down and played much better in the second and third quarter. Losing Kami early in the game was unfortunate but I was very pleased to see how we handled the adversity,” said USA Head Coach Adam Krikorian. “All together, I’m very happy with our defensive effort. We were very consistent over the six games, and the group has grown tremendously in the short amount of time we’ve been together.”