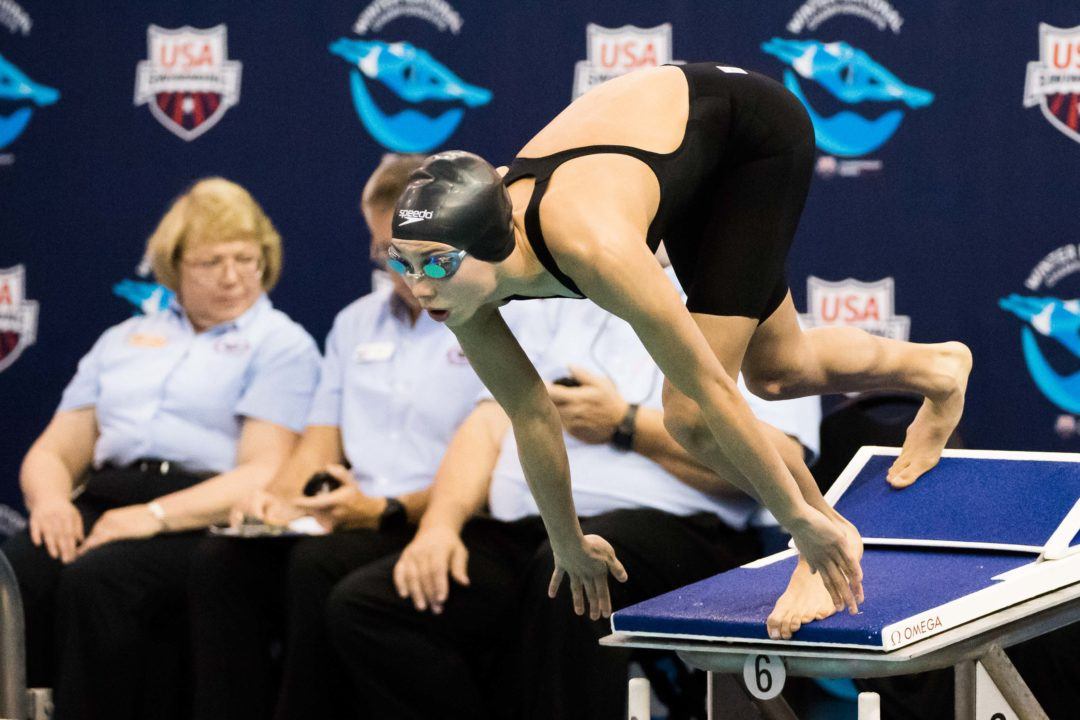 On her last day being 16 years old, Torri Huske pulled an upset and not only won the U.S. Open title in the 100 fly but broke her own 15-16 NAG. Stock photo via Mike Lewis/Ola Vista Photography

During the A-final of the 100 fly, 16-year-old Torri Huske was seeded out of lane one against big names. The youngster not only had an impeccable start, but powered to an upset win with her breakouts and turn.

Huske, who turns 17 tomorrow, broke her NAG from the 2019 World Junior Championships of 57.71, chopping three-tenths off the mark. As mentioned in her interview, her breakouts and turn seemed to pay off as she brought home her race 0.67 seconds faster than her NAG.

Huske’s winning time of 57.48 is also under the 17-18 NAG, which is held by Katie McLaughlin at 57.87. This now makes Huske the fastest 18&U performer in history, and she still has two more years as a junior.

On the day before her 17th birthday, Torri Huske blasted a 57.48 to win the 100 fly from an outside lane, upsetting the favorites and notching both a U.S. Open Meet record and a National Age Group record for 15-16 girls. Her time was also faster than the 17-18 NAG record. (Whether she had swum the race on Friday or on Saturday, her “swim age” for NAG record purposes is her age on the first day of the meet. So either way it would have been a 15-16 NAG record.) Huske mentioned in her post-race interview that she has been focusing on breakouts and turns, and it showed. Huske moved from second place to first on the breakout off her turn and was unstoppable on the way home.