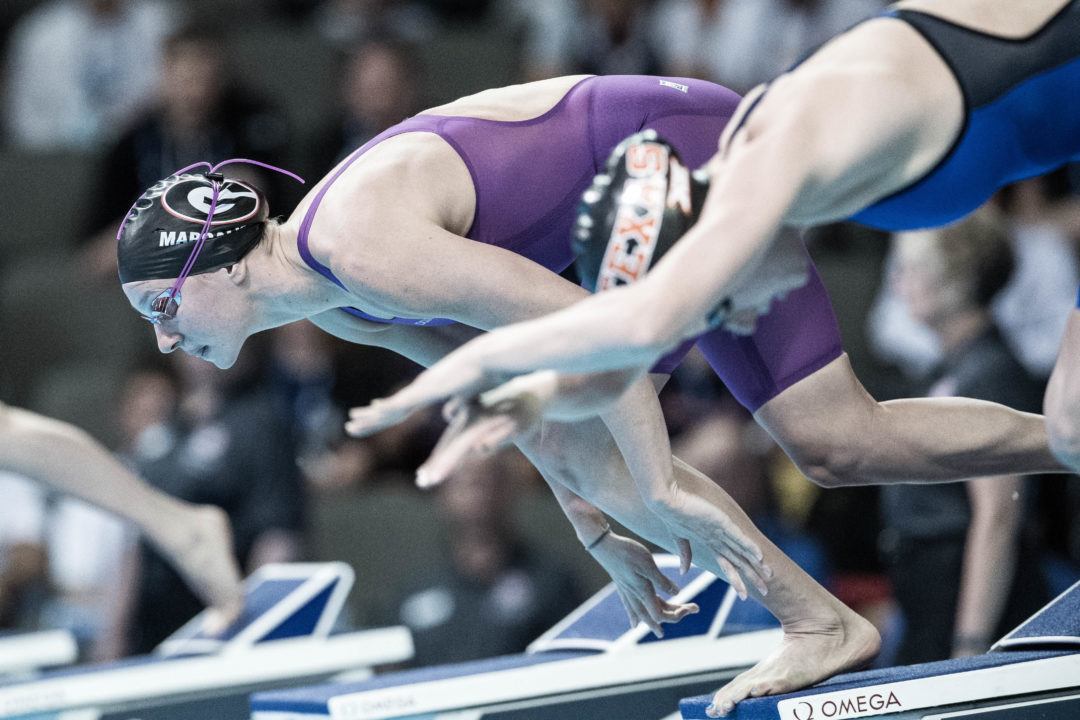 It was a record-breaking weekend in Atlanta, with 18 US Open meet records broken and just 10 now remaining. Stock photo via Mike Lewis/Ola Vista Photography

Chase Kalisz has dropped the 200 BR on night 4 of the US Open after finishing 9th in prelims, meanwhile, Kieran Smith will contest only in the 200 BK A-final.

It was a record-breaking weekend in Atlanta, as 18 new US Open Championship meet records were established. After the cleanup, just 10 now remain. Here’s an in depth look at the meet records over the weekend.

While this seems like a big haul, and it is, there is an explanation for the number of records that isn’t entirely based in “everyone swam super fast.” This year, USA Swimming changed the name of the Winter National Championships to the U.S. Open. In the past, the U.S. Open has served many different purposes and resided in many different spots on the American swimming calendar. Most recently, like in 2017 and 2018, the meet has served as a late-summer championship meet when timing required an early-summer Trials meet, as it would have in 2016 for the Olympic Games or 2017 for the World Championships.

This year, however, it took the spot of the former Winter National Championship meet, which is usually in yards but has often been held in long course in pre-Olympic years (like this one).

Rather than rolling forward the old Winter Nationals long course records, however, they pulled in the records from the other U.S. Open meets.

The result was a lot of very old records, and a lot of very beatable records – because it’s been a while since a U.S. Open meet has been held in a time of year where the superstars of the sport would attend.

Before the weekend, the records book spanned decades, with a plethora of powerhouse names ranging from the most recent US Open meet (2017) to all the way back in 1987.

Throughout the course of the meet, a US Open meet record was broken 24 times. Among the highlights, 6 events saw the meet record broken twice, once during prelims and again during finals. The lone exception was the women’s 400 free, as Katie Ledecky broke the individual event record during her Wednesday 800 free swim (4:04.96 split at the 400m mark) and again during the event final (4:00.81).

Five teenaged swimmers also saw their names written on a meet record at one point during the weekend. In the women’s 100 back, 17-year-old Regan Smith broke the meet record during prelims at 58.96, to no one’s surprise, But in the final, fellow teen Phoebe Bacon pulled out a win over Smith and broke her hours-hold record with a 58.63.

The youngest record-breaker, 16-year-old Torri Huske, not only won the women’s 100 fly final out of lane one at 57.48 but did so with names like Kelsi Dahlia and Amanda Kendall in the same final. Huske walked out of the final with her first US Open title, first senior record under her belt, as well as breaking a 15-16 NAG for the last time (her birthday was the following day after the final).

Before the meet, seven meet records were held by an international swimmer. Among the names, Dutch sprinting legend Pieter van den Hoogenband held the 200 free meet record for 14 years until Townley Haas broke the record in the event final (1:45.92). The lone international swimmer to break a meet record at the 2019 meet was Brazilian Bruno Fratus, who broke South African Brad Tandy‘s 2017 record (21.70) with a 21.59 during prelims.

At the conclusion of the four-day meet, all but 10 records remain.

On the women’s side, just 3 meet records remain. Among them are the 200 back, held by Hayley McGregory, and the 100 breast, with Jessica Hardy‘s former long-standing American record. Aussie Susie O’Neill, who was nicknamed “Madam Butterfly” during the late 90s/early 00s, also saw her record stay safe from the frenzy.

*records in italics were eventually re-broken during the event final