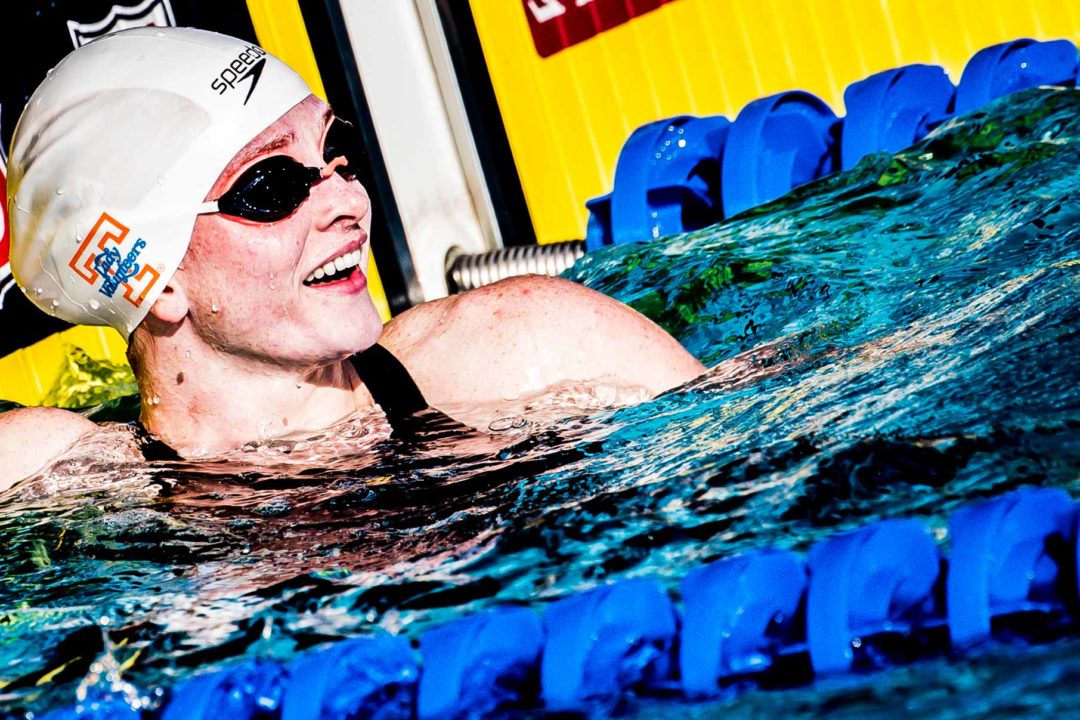 The swim caps off a paradigm-shifting 2 weeks of racing for Erika Brown, who has now muscled her way from darkhorse to forefront contender for Team USA. Archive photo via Jack Spitser/Spitser Photography

Erika Brown has already honed in her double taper, which could come in handy for this summer’s U.S. Olympic Trials.

Brown, after a historic meet at the Tennessee Invitational before Thanksgiving, is having another big performance this weekend at the U.S. Open Championships. That includes on Saturday evening winning the women’s 100 free in 53.42 and, in the process, beating out the defending World and Olympic Champion Simone Manuel. Coming into the meet, Brown’s best time was just 54.13, a time that was done at this summer’s US National Championships.

Her new best makes Brown the 8th-fastest American in the history of the event, and the 4th-fastest active American (based on times done in the 2010s by swimmers who have not formally retired).

The times alone, which include becoming the 2nd-fastest 100 yard freestyler in history and swimming the 7th-fastest 100 yard fly (by performances), and showing off some 200 free abilities that we didn’t know about before, are exciting. The fact that she’s been able to carry that speed across 2 weeks, including a separation by Thanksgiving, makes it look like Brown is ready to translate the short course success that she’s shown us so often in NCAA swimming into long course success, just in time for the Tokyo Olympics.

The fact that she’s been able to carry her taper forward so well will make her an important piece for the American 400 free relay this summer, as the U.S. tries to find a way to knock off the loaded Australian relay. Over the last 2 weeks, she’s gone from a “maybe qualifier on a relay spot” to a crucial relay leg for Tokyo, with the potential now to maybe pick off an individual swim or two as well.

She now takes a seat at the table alongside Manuel and Abbey Weitzeil as part of a three-headed monster of American women’s sprinting – the deepest such group that the United States has had in a while. If Mallory Comerford, who hasn’t looked as good this season as she has in past years but was fast at Worlds, can get righted for this summer, then the U.S. has a shot at closing the .81-seconds gap that the Australians had in the 400 free relay at the World Championships.

Brown’s Progression over the last 2+ weeks of swimming:

Erika Downtown Brown is the bing, bang, bonger who will win NCAAs, make the Olympic Team and be Tennessee Swimmings first girl Olympic Gold Medalist…I hope. Then she will be amazing!!!!

She is evolving very well – Great chunck of time she took down there from her previous best . Would Love to see her on that Tokyo relay