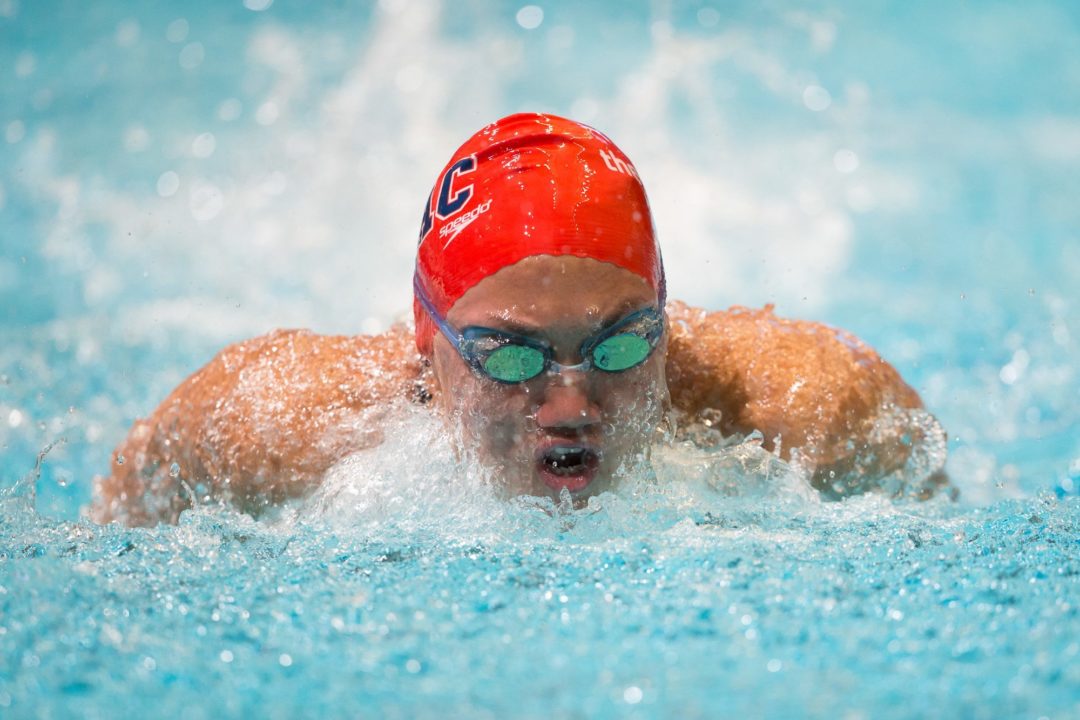 College swimming programs aren’t the only scholastic groups on the chopping block these days. At a hearing on Thursday night...

College swimming programs aren’t the only scholastic groups on the chopping block these days.

At a hearing on Thursday night about the $6.7 million Albemarle County, Virginia Public Schools budget shortfall, school superintendent Pam Moran suggested cutting the districts swimming & diving program as the #2 item in an attempt to balance their budget.

Based on a presentation given to parents, it seems as though the superintendent has a priority to cut the swimming program as part of the budget closing, saying that they’ve tried everything they can that won’t hurt the students directly.

The district has 4 high schools that have produced a significant number of Division I collegiate swimmers. That includes most recently Penn State commit Hannah Harper and YMCA Nationals medalist Remedy Rule, who attends Western Albemarle High School and should be one of the top 50 recruits in the class of 2015.

Another of those Division I swimmers is American University senior Sean Cudahy, who gave us his thoughts on the cut.

I’m disappointed this discussion is even on the table. The swim teams at Albemarle and Western Albemarle High Schools are among the most successful athletic programs in Central Virginia.
$29,000 saves .04 percent on the budget deficit but it’s hard to quantify how big swimming is in the Charlottesville community. Getting rid of high school swimming will be a major blow to that community.
Personally, I’d like a little more transparency from Pam Moran on how she came up with this particular idea. There are many alternatives in play around the state, like in Fairfax County, where students pay a participation fee. I’m sure parents would be more than willing to pay some money to avoid having the team evaporate.
I’m finishing my senior swimming season in college right now and it’s in large part thanks to the experience, the fun and the growth I had as a swimmer at Albemarle. The swimmers in Albemarle County deserve that opportunity.

According to the district’s official budget cutting plan, axing the swimming program would only save about $29,000 from the annual budget, which is less than one-half of one-percent of the budget shortfall. That’s because the district doesn’t imagine that cutting the swimming and diving programs will result in the loss of any full-time positions.

Meanwhile, parents interviewed by a local CBS station said that they’d be happy to chip in extra money in athletics fees to ensure that the schools don’t have to cut those programs.

Other ideas proposed include cutting interpreter and translator services for a large Latino population in the area. The district also proposed increasing the average class size by .5 students, which would eliminate  21.87 full-time equivalent jobs and save the district an estimated $1.5 million. Both of those items are in “Tier 1,” as the district has laid out a three-part plan depending on how much they are actually forced to cut.

Tier 1 also includes a plan to increase athletic participation fees by $50,000 already built into it. Eliminating the swimming program is the only specific sport that is mentioned,and it is likely that the swim team is a substantially higher financial burden as compared to other programs, aside from the fact that pool rental fees are an easier cut than basketball gyms and soccer fields that are already constructed on school campuses.

There are reports that the school had an opportunity 5 years ago to receive free pool usage, but declined. We are awaiting more details on that story.

There are pools on the district’s campuses, including the Smith Aquatic & Fitness Center, but they are public facilities not reserved for school use specifically.

While the school’s presentation begins with an emphatic slide reading “Our deficit is not an expenditure problem. It’s a revenue problem,” the vast majority of the school’s proposed changes are spending cuts.

The area is served by club teams like the Virginia Gators, the Waynesboro YMCA, and the Shenandoah Marlins.

The University of Virginia is also located in Albemarle County.

Villa Aquatic’s Dive Team located in the heart of Fairfax, Virginia just outside Washington D.C. is accepting applications for an experienced Head Dive Coach and possibly an Assistant Dive Coach. Come be a part of our dedicated coaching team and lead our divers for the 2014 summer season.

Applicants should have strong diving skills and be able to impart safety, sportsmanship, good teaching/coaching, and instruction/demonstration in a fun, team spirited environment. Strong communication, positive, upbeat attitude and organizational skills are a must. The Head Dive Coach will lead our team by organizing, directing and coaching all practices/meets, leading and mentoring an assistant coach if applicable,… Read more »

update: it is not off the table. braden i can send you the link if you’d like

it is not ON the table anymore. swimming is saved, i think the whole community rallied behind swimming, as it is historically the most successful sport in recent years in the area in terms of state & regional championships and in terms of # and % of athletes who go on to compete in college. and i only know about one of the schools, but usually one of the higher GPA sports

This seems like something that would happen, and they will leave softball and other sports instead. this was destiny

I was really looking forward to trying out for swimming on the Albemarle team, I was really hoping I would be able to, as well as many of my friends, please don’t cut the swimming program.

As a public school board president in Pennsylvania, we struggle with budget deficits as well. Cutting athletic programs saves very little money, and takes away learning experiences that equal many classroom classes. Also, with the obesity epidemic raging on in this country, it would be extremely short sighted to curb athletics rather than cut/reduce non-essential staff. If public education is truly there “for the students”, then this would hurt more than having class sizes rise by a few students. We have had success with streamlining our staff, rather than cut programs. I truly hope these swim programs survive.

Swim Swam family – consider signing this petition and helping this community keep swimming in the high schools. It takes less than a minute of your time but it can make a difference for thousands of people.

I think some are missing the point of the article. It is not about where UVA is located or what year-round teams are mentioned – it is about the potential loss of high school swimming and diving in a swim friendly area! Focus on the big picture.

If you would like to research more, you can use UVA’s GIS services here:
http://avillage.web.virginia.edu/srem/teams/

Unless Charlottesville has recently completed legally annexing the rest of the university…but until you show us evidence of that, we’ll stick with UVA being mostly in Albemarle County.