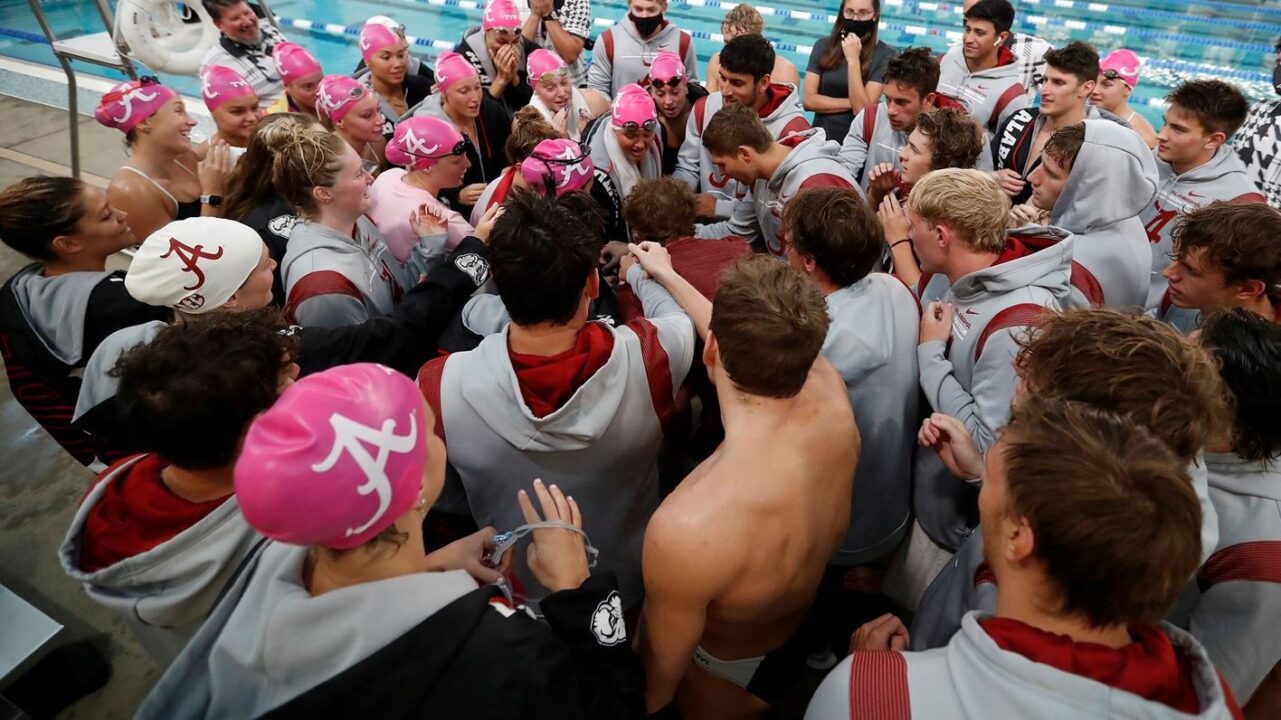 Day 1 of the 2021 Tennessee Invite featured multiple nail-biting swims. Alabama and Virginia fought until the end to come out on top after day 1. Archive photo via Crimson Tide Photos : UA Athletics

The University of Alabama was off to a strong start on Day 1 of the 2021 Tennessee Invitational. Both the women’s and men’s teams led the team scores at the end of the first day of racing. The evening was packed with close races and a few school records. Catch the full recap here.

Alabama and Virginia battled it out to the wall in the 200 free relay. Alabama’s relay of  Kalia Antoniou, Morgan Scott, Kailyn Winter, and Cora Dupre eventually got to the wall first in a time of 1:26.38. Virginia was close behind, finishing second in 1:26.61, followed by Tennessee’s 1:28.19. All three teams were under the NCAA ‘A’ cut.

Alabama’s time makes them the fastest in the country this season. It was also a new school record. The previous time of 1:27.02 was set in 2020.

All eight women in the A final of the 500 free swam under the 2021 NCAA invite time. The top three finishers touched within 0.14 seconds of each other. Kensey McMahon of Alabama got her hand on the wall first at 4:38.76. Julia Mrozinski of Tennessee was second and Emma Weyant of Virginia was third.

Olympic medalist Kate Douglass of Virginia breezed to the wall to win the 200 IM in 1:52.21. Tennessee’s Ella Walsh was 2.5 seconds behind her for a second-place finish of 1:54.77.

South Carolina’s Patrick Groters had a notable swim in the B-final. His time of 1:44.02 won the B-final and would have placed him second in the A-final.

Morgan Scott and Kalia Antoniou of Alabama went 1-2 in the 50 free. As expected, it was a close race, with only 0.04 seconds separating the women. Scott touched in 21.80 and Antoniou was second in 21.84.

The 400 medley relay was a nail-biter. Alabama and Virginia were neck-and-neck throughout the race. Virginia pulled ahead and Alabama’s Kalia Antoniou tried to make up for lost ground, but Alex Walsh held on to give UVA the final win of the evening in 3:27.12.

Alabama blew the rest of the competition out of the water in the men’s 400 medley relay. Matthew Menke, Derek Maas, Bernardo Bondra,and Jonathan Berneburg touched first in 3:04.36, four seconds ahead of UVA’s second-place finish.