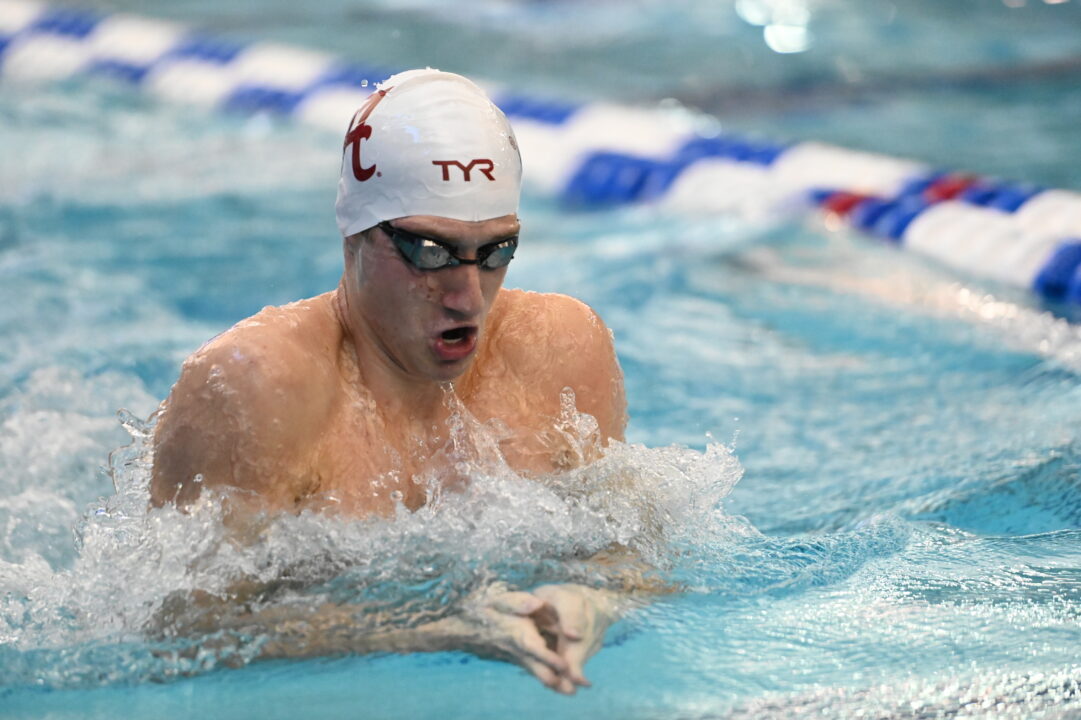 Junior Derek Maas crushed his lifetime best 200 IM time from the 2020 SEC Championships by 1.8 seconds and set a new meet record with a time of 1:43.12. Archive photo via NCAA photos

Thursday marks day 1 of the 2021 Tennessee Invite where the Vols are hosting Virginia, Alabama, South Carolina, UNLV and Carson-Newman. As a reminder, here are the cut-off times it took to qualify for the 2021 Division I NCAA’s Championships:

Note that two big Virginia names are absent from the meet: freshman Gretchen Walsh is out and sophomore Matthew Brownstead scratched the 50 free and is unlikely to return to the meet.

Olympic silver medalist Emma Weyant of Virginia kicked off the meet by coming within 2 seconds of her lifetime best 500 free time with a 4:40.28. The freshman claimed the top spot in finals .82 ahead of her junior teammate Ella Nelson who was on her heels the entire race until Weyant swam a 27.36 on the final 50 yards.

On the men’s side, Tennessee sophomore Rafael Ponce de Leon battled Alabama freshman Charlie Hawke from Australia. The Vol got a half second lead on the field with 200 yards to go, though, and held onto it to finish first with a lifetime best 500 free time of 4:19.15. He beat his previous best, from last season’s SEC Championships, by .97.

Hawke snagged 2nd (4:20.30) while UNLV’s Chris Mykkanen out touched his freshman teammate Andrew Navarro by .08 to place 3rd with a 4:21.76. This was a huge swim for Navarro who crushed his lifetime best from 2019 by about 8.5 seconds. Mykkanen was within 2 seconds of his best time.

The top 8 finishers cleared the NCAA ‘B’ cut while Ponce de Leon was about 9 seconds off the ‘A’ cut.

The third event of the session was the women’s 200 IM where Tennessee freshman Ellen Walshe posted the fastest time with a 1:56.57, followed by Olympic bronze medalist Kate Douglass of Virginia (1:56.79). Alabama’s Cora Dupre touched the wall at 1:56.83, meaning the top 3 seeds going into the final are separated by just .26.

The top 16 finishers beat the NCAA ‘B’ cut here and Walshe was about 3 seconds away from the ‘A’ standard.

The Crimson Tide kept up their momentum, with the Alabama men sweeping first and second place in the 200 IM. Junior Derek Maas led the charge with a 1:43.12, finishing the race in 25.55 on the final 50 yards. He set a new meet record and crushed his lifetime best time from the 2020 SEC Championships by 1.8 seconds. He was followed by his freshman teammate Linus Kahl from Sweden (1:45.61).

Top seed Sean Conway of Virginia snagged 3rd with a 1:46.22, about 2 seconds off his lifetime best.

The top 6 swimmers broke the NCAA ‘B’ cut and Maas came within 2 seconds of the ‘A’ cut, the closest anyone has been to securing an ‘A’ standard this session.

Day 1’s prelims session ended with sprints. Alabama seniors Kalia Antoniou and Morgan Scott went 1-2 in the 50 free with times of 21.85 and 22.19, respectively. Tennessee junior AJ Kutsch out touched freshman Kailyn Winter by .11 to snag 3rd and prevent a 1-2-3 Crimson Tide finish with a time of 22.25.

The top 17 finishers swam under the NCAA ‘B’ cut while Antoniou came within .19 of the ‘A’ cut.

Virginia sophomore Matt King dominated the men’s 50 free with a time of 19.39, within .43 of his lifetime best from the 2021 SEC Championships where he competed for Alabama. Tennessee freshman Jordan Crooks took 2nd place (19.61) closely followed by Alabama senior Jonathon Berneburg (19.68).

This was a lifetime best by .60 for Crooks who posted his previous best time in October at the Tennessee vs Louisville dual meet. His 19.61 would have tied him for 3rd in the B final at the 2021 SEC Championships.

The top 11 swimmers undercut the NCAA ‘B’ standard while King came within .43 of the ‘A’ standard.

Bama swimmers are dropping a ton of time! I’m looking forward to watching the relays tonight!

Pretty impressive depth by Tennessee across the board

Didn’t realize how big their team is on the women’s side. They had 20 women swim the 200 IM.

i thought Alabama swam pretty well also for all the flack they take in the comments section they seem to have their act together.

The swimswam comment sections can very rarely be trusted to portray what is going on within a program. Margo has a good enough supporting team of coaches around her and enough talent on the roster to keep things rolling in the right direction