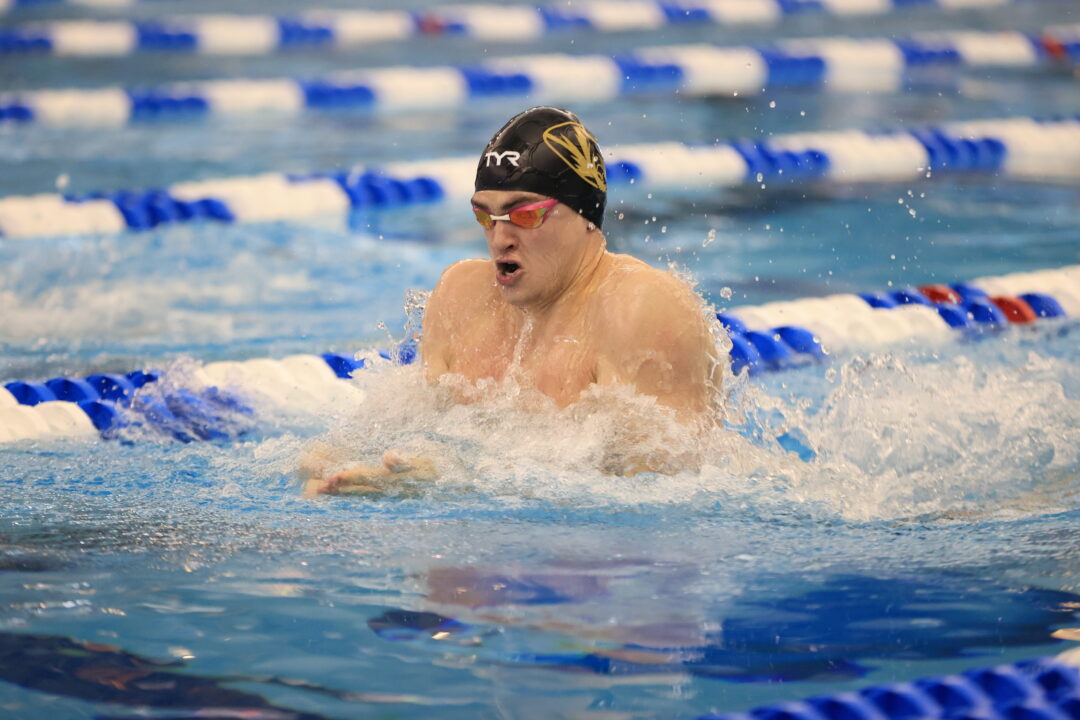 Mizzou's Ben Patton blasted a time of 51.50 in the men's 100 breaststroke prelims to take over the top spot in the national rankings. Current photo via Carlos Morales/NCAA Photo

The home team had a phenomenal preliminary session on Thursday at the 2021 Mizzou Invite, as the Tigers grabbed seven of the 10 available top seeds while a pair of their men’s swimmers put up nation-leading times.

The other NCAA-leading performance of the morning came from Mizzou junior Ben Patton, who popped off a blistering 51.50 in the men’s 100 breaststroke.

Patton chops three-tenths off his previous best time of 51.80, set at the 2020 Mizzou Invite, while taking over the top time in the country with a bullet, surpassing Michigan’s Will Chan (52.14). USC’s Trent Pellini hit a time of 51.63 at the Art Adamson prelims this morning, just off of Patton’s performance.

On last night’s 400 medley relay, Patton was slightly slower despite having a flying takeover (51.63).

Mizzou will have five of the eight ‘A’ finalists in tonight’s men’s 100 breast, including the top four seeds. Ty Spillane qualified second behind Patton in 52.38.

mIZzOu WoNt SwIm FaSt CaUsE tHeY sUiT fOr DuAl MeEtS

Mizzou is looking good for reclaiming the title of deepest breaststroke group in the nation with 4 sub-53 100 breasts this morning (Patton and Spillane plus Pales: 52.70 and Goodwin: 52.99) and two others on the roster that have been 52 before (Kovac: 52.73, Rindshoej: 52.48). Rindshoej had a tight turnaround with the 200 Free so he should be in the mix tonight after scratching the 200.

The 100 breast has gotten so deep the last couple years and there are a few other teams that have swimmers capable of that depth. I’m excited to see what this group… Read more »

You’ve got that right! Mizzou has a winning tradition in breaststroke and has developed some phenomenal breaststrokers.

That man andrew grevers really is the breaststroke whisperer!