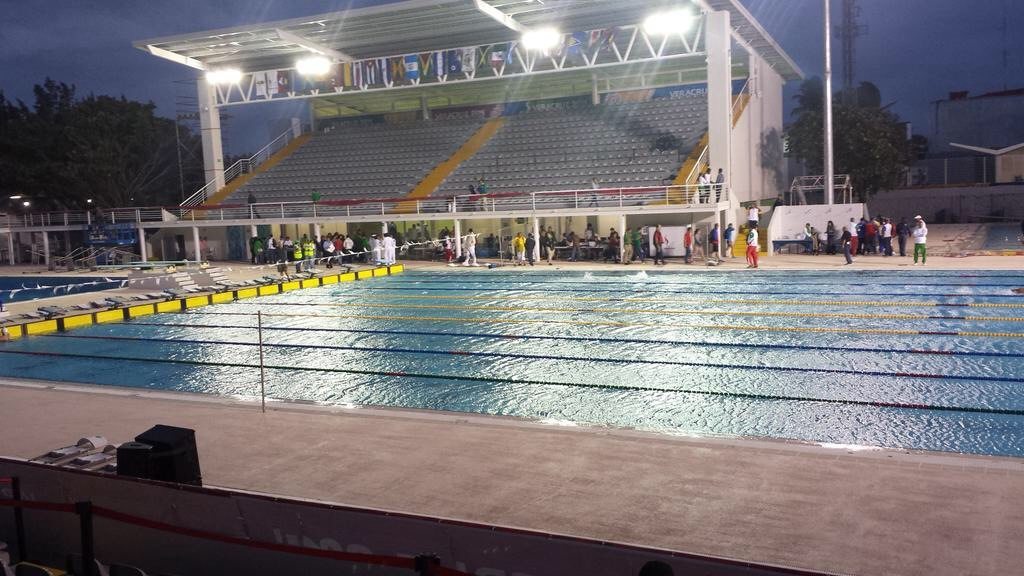 Arianna Vanderpool-Wallace is having a beast of a meet, earning two sprint wins just tonight Current photo via Elvis Burrows

Veracruz, Mexico, November 18, 2014 –  With last night’s cancellation of finals due to high winds, additional action was on the docket for this evening’s session at the Central American & Caribbean (CAC) Games.  The women’s 100m freestyle and the men’s 50m butterfly finals were tacked on to the events already scheduled for tonight, with additional canceled finals from yesterday spread out over the remaining days of competition this week.

50m butterfly gold medalist at these games, Arianna Vanderpool-Wallace (Bahamas), kicked off the night with a new CAC Games record in the women’s 100m freestyle.  Her gold-medal-winning time of 54.87 surpassed the previous mark of 55.00, held by Vanessa Garcia from Puerto Rico from the 2010 CAC Games.  In this year’s edition of the games however, Garcia took home the bronze in a time of 56.70, while the silver medal was claimed by Mexicos’ Liliana Ibanez in a time of 56.28

The women’s 200m breaststroke also saw a CAC Games record go down, as Mexico’s Byanca Melissa Rodriguez raced a time of 2:29.37, which was well under the record mark of 2:30.99 held by Jamaica’s Alia Atkinson from 2010.  Esther Gonzalez (Mexico) earned the silver in 2:32.62, while Mercedes Toledo (Venezuela) captured the bronze in 2:32.95.

Not to be left out of the record-breaking streak on the women’s side, Andreina Pinto (Venezuela) raced past the previous CAC Games mark in the 400m IM tonight.  Pinto’s time of 4:48.80 cleared the previous mark set in 2010 by Charetzeri Escobar of Mexico.  To either side of Pinto on the podium, were two women from Mexico; Natalia Jaspeado, who earned silver in 4:53.81 and Maria Gabriela Jimenez, whose 5:01.16 snagged the bronze medal in the event.  Pinto is having a monster meet, having already won the women’s 200m and 400m freestyle events.  She is still slated to swim the 200m butterfly, 200m IM, and 800m freestyle events this week.

Although the final women’s event of the night did not see a record broken, a tough race ensued in the pool for the 100m butterfly gold.  Arianna Vanderpool-Wallace once again pulled out the victory, holding off the fast-closing field to win in 1:00.17.  Closely following her in second place was Jessica Camposano (Colombia) in 1:00.64 and Carolina Colorado (Columbia) in 1:00.97.

The men certainly made some headlines of their own during their races tonight, as the 50m butterfly, 400m freestyle, 200m backstroke, 50m breaststroke, and the 4 x 100m medley relay events were contested.  To start off the men, Albert Subirats (Venezuela) took home the gold in the 50m butterfly, winning in a time of 24.01.  Luis Carlos Martinez from Guatemala earned the silver in 24.31, while Renzo Tjon-a-Joe from Suriname grabbed the bronze in 24.56.

Next up was the men’s 400m freestyle, where Colombia’s Mateo De Angulo raced to a new CAC Games record with his winning time of 3:53.20.  The previous record of 3:55.19 was held by tonight’s bronze medalist, Cristian Quintero (Venezuela), who finished  in a time of 3:55.22.  Marcelo Acosta  (El Salvador) slid into the silver medal spot with his time of 3:53.39.

In the last individual event of the evening, Jorge Murillo of Colombia gave a final surge in the men’s 50m breaststroke final to put up a solid time of 28.12 to win the gold medal.  Edgar Crespo (Panama, current games record holder) came in second place in 28.35, while Miguel DeLara (Mexico) claimed bronze in 28.46.