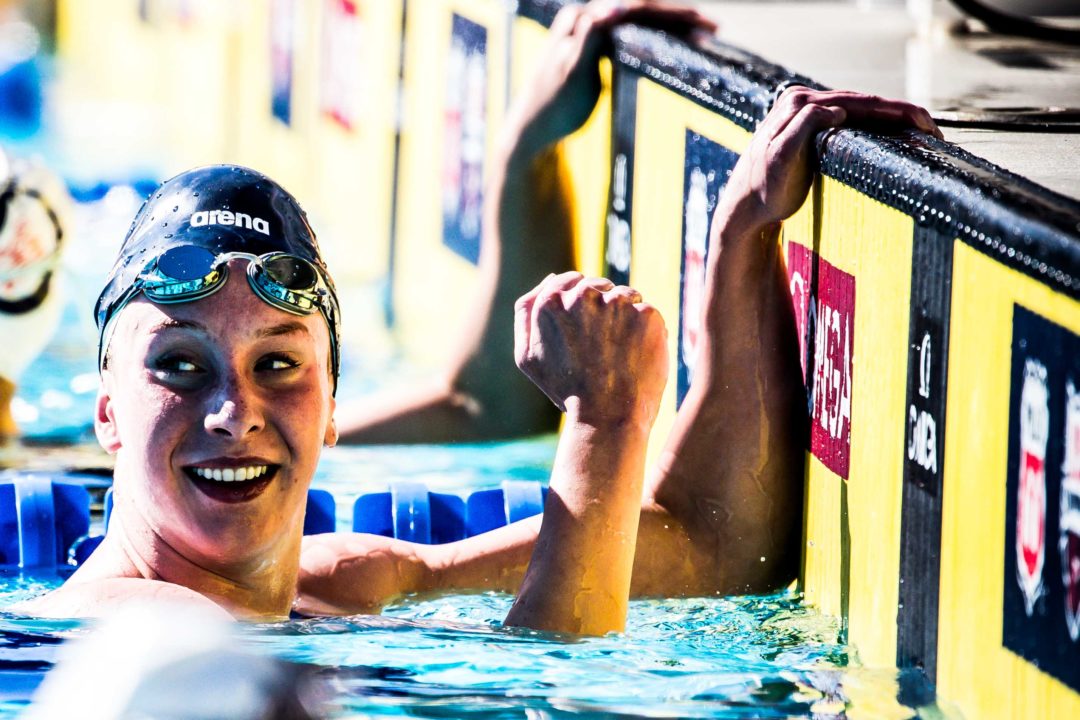 Psych sheets for the Richmond location came out earlier this week, and the lists for almost every event are topped either by a UVA swimmer or an age group standout, although there are also a couple of other intriguing names listed.

UVA swimmers top the psych sheets in nearly half of the events, with distance star Paige Madden and freshman jack-of-all-trade Alex Walsh leading the way with three #1 seeds each. Madden tops the 200/400/800 freestyles and is also entered in the 1500 free, where she’s entered with a yards time. Walsh is seeded #1 in 200 IM, 100 back, and 200 back, and she’s also entered in the 100 fly.

Most of the rest of the names at the top of the psych sheets are stand-out age groupers, including some of the top recruits in the high school class of 2021.

Torri Huske, who swims for Arlington Aquatic Club and will be heading to Stanford next year, is seeded first in the 100 fly and the 100 free, and is also entered in the 200 IM (where she’s seeded between Walsh and Douglass), the 50 free, the 100 back, and the 200 fly.

Also entered are a couple of younger teens who’ve been rewriting the NAG record books over the last year or so, Thomas Heilman (Cavalier) and Daniel Diehl (Unattached/Cumberland YMCA). The 13 year-old Heilman is entered in the 50 free, 100 free, and 100 fly, the three events in which in August he became the fastest 13 year-old ever in yards. Diehl, who just aged up after breaking a pair of NAGs, is entered in the 50/100/200 free, and the 100 back.

Finally, we’ve got a few current college swimmers and alum who either hold #1 seeds or are otherwise notable.

The men’s 50 free may be the most intriguing event, in terms of who’s entered. Alberto Mestre holds the top seed in the event, and it’s a bit surprising to see him at this particular location. Mestre, who represents Venezuela internationally, had been swimming for Stanford, then took the spring semester off to focus on the Olympics, and seemed to be training with the Gator Swim Club, or elsewhere in Florida, and the psych sheet shows him as unattached.

The College of William & Mary alumnus Colin Wright, who last year became only the 4th swimmer from a mid-major ever to break 19.0 in the 50 yard freestyle (before W&M cut swimming, then reinstated it), is also entered in the 50 free. Pitt sprinter Blaise Vera is also entered, although his status seems questionable after Pitt abruptly pulled out of their dual meet against Notre Dame this weekend due to COVID-19 concerns.

However, the most intriguing name on the psych sheet may be 29 year-old Austin Surhoff. The former Longhorn won the 200 IM at NCAAs a freshman, currently is an assistant coach at Johns Hopkins, and has only swam in one official meet since the 2016 Olympic Trials.

with all the other geriatrics in Budapest, I guess it’s up to me and Conger to hold it down for the old guys. I accept this duty with solemn gratitude.

Have other psych sheets come out?

No other meets have psych sheets yet, but this link has meet info for all the meets and should post psych sheets as they come out. https://www.usaswimming.org/event/2020/11/12/default-calendar/toyota-u.s.-open

So are the UVA swimmers going without a coach? Big Ten, SEC and Pac12 aren’t allowed to go to US Opens because of the dead period. Be interesting to see how this plays out.

I’m not sure why going to coach at US Open would conflict with that rule. It would just limit the activities they’re allowed to undertake while at the meet, right?

Coaches cant’ observe recruits. My guess is they’ll just put on blinders when recruits swim. When it coms to recruiting the ACC already has them.

College Team Competing In An Open Event During a Dead Period (I)
Division: I
Date Published: August 18, 2008
Item Ref: a
Interpretation:
The membership services staff determined that it is permissible for an institution’s team to participate in an open event that occurs during a dead period and that includes prospective student-athletes, provided no recruiting activities occur. [Reference(s): Division I Bylaws 13.02.4.4 (dead period); 13.1.8.16 (open events in which college teams compete); 13.11.1.2 (competition against prospective student-athletes) and 13.11.3.1 (“open” events)]

They just can’t talk to recruits while there…?