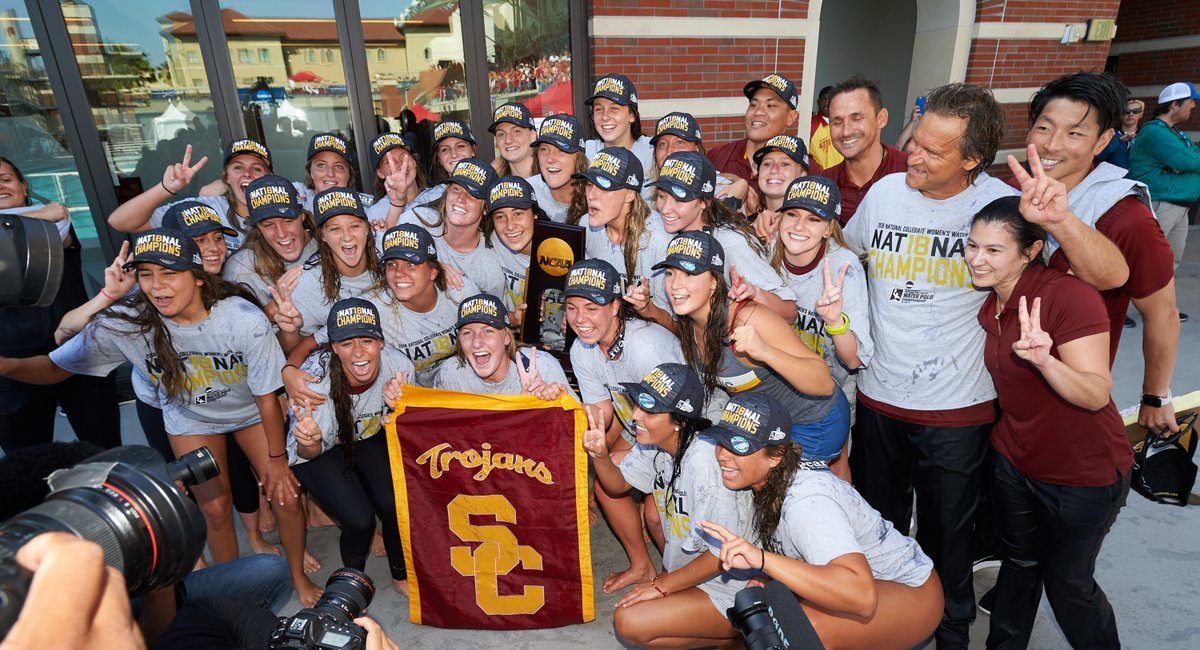 Defending National Collegiate champion USC checks in at No. 1 in the CWPA Varsity National Top 25 Preseason Poll after claiming their fifth NCAA title with a 5-4 win over Stanford in May. Current photo via USC Athletics

Defending National Collegiate women’s water polo champion USC checks in at No. 1 in the CWPA Varsity National Top 25 Preseason Poll after claiming their fifth NCAA title with a 5-4 win over Stanford in May.

National Coach of the Year Jovan Vavic returns four All-Americans from that team, which also won the MPSF title, including National Player of the Year Amanda Longan who is back her for senior season in goal.

Hauschild put in 68 goals, the most ever for a USC true freshman, including 25 against top five opponents, en route to MPSF Newcomer of the Year accolades.

Megens notched 2.2 goals per game in 17 appearances after missing 10 games due to injury early in the season. The MPSF Tournament MVP  and All-MPSF First Teamer improved on her second team All-America rookie campaign.

Mammolito produced 43 goals for the Trojans in 2018, second most on the team, including three scores in the NCAA title match.

Klass is back for her senior season after earning a second team nod as a freshman and adding 39 goals her junior year (1.63 per game in MPSF action). She posted 11 multi-goal efforts, including four hat tricks.

UCLA, which ranked fourth in the final poll of 2018, moves up a spot to No. 3 to open 2019. Cal slips a spot from three to four, while Arizona State rounds out the top five. The Bruins and Bears each boast three returning All-Americans, while the Sun Devils bring back two honorees.

The 2018 Big West champions, Hawaii, check in at #6, tied with conference foe UC Irvine, up from No. 7 and 8 respectively.

UC San Diego, which won the regular season and WWPA tournament titles and was the only Division II team to advance to the national tournament, is #15. The Tritons bring back four All-Americans, including first teamer Chanel Schilling.

Harvard was the lone new addition to the 2018 final poll, moving from receiving votes into the No. 21 spot.

Pomona-Pitzer, which won the Southern California Intercollegiate Athletic Conference title and represented the league at the National Collegiate tournament, received one vote in the poll, earning the #29 spot. The Sagehens will open the season as the top ranked Division III team, leading the CWPA’s Division III Top 10 Preseason Poll.

Umm ACC Fan, it says (WP) in the headline.

Cool that there are over 25 teams