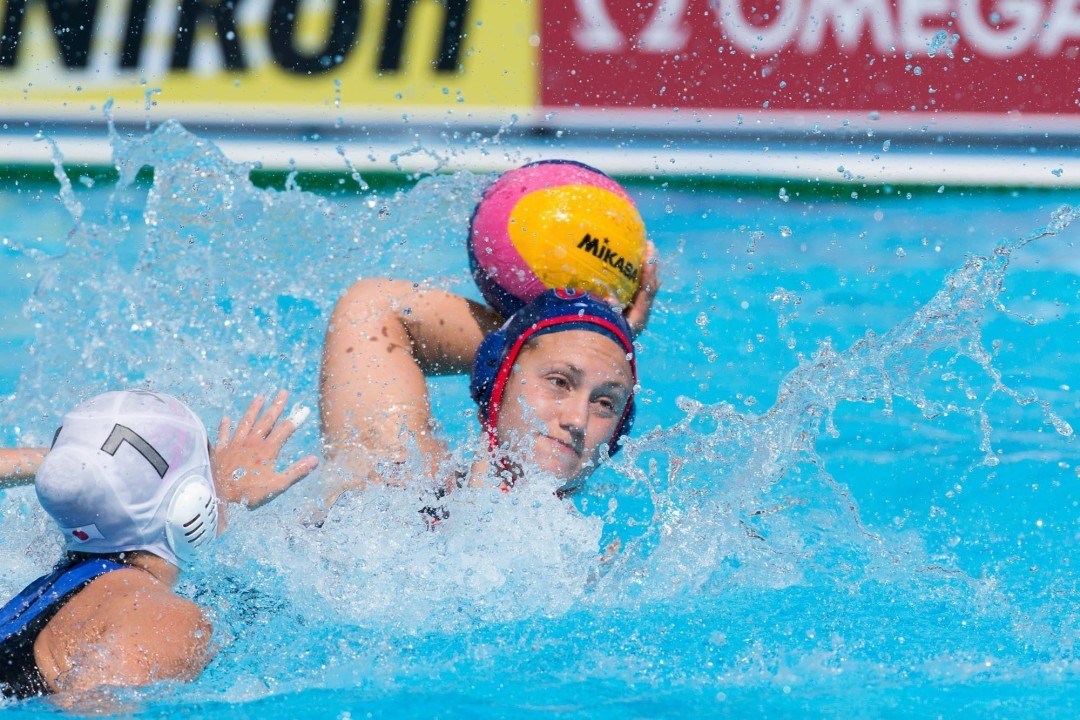 The USA Women's National Team left no doubts in their group play performance at the 2016 Olympic Qualification Tournament as they capped their five game undefeated run with a 25-1 romp over South Africa. Archive photo via Tim Binning/TheSwimPictures.com

Gouda, Netherlands – March 25 – The USA Women’s National Team left no doubts in their group play performance at the 2016 Olympic Qualification Tournament as they capped their five game undefeated run with a 25-1 romp over South Africa. Next on the agenda is the quarterfinal round on Saturday where Team USA can punch their ticket to the 2016 Olympic Games. The top four finishers from this event earn a trip to Rio and the United States will have to defeat France to earn a chance at defending their Olympic Gold from 2012. France defeated Germany 9-5 on Friday evening in Gouda. The match is scheduled for 12pm local time in Gouda/7am est/4am pst. The match will be streamed live through NBC Sports Live Extra and air on delay on NBC Sports Network at 4:30pm et/1:30pm pt. For viewing information, click here. Be sure to check your local cable provider information for NBC Sports Network and visit the app store on your streaming device for NBC Sports Live Extra. For more information and results from the Olympic qualifier, click here.

As for the win over South Africa, the United States put the match away early as Maggie Steffens (Danville, CA/Stanford/NYAC) delivered a hat trick in the opening 2:20 to grab a 3-0 lead. KK Clark (Menlo Park, CA/UCLA/NYAC) followed with a push shot off the water in transition for the first of her four goals and a 4-0 lead. Maddie Musselman (Newport Beach, CA/Corona del Mar HS/CdM Aquatics) chimed in afterwards with the first of her four goals for a 5-0 lead. Next up was Melissa Seidemann (Walnut Creek, CA/Stanford/NYAC) taking a dish from Clark for a score, then another goal from Musselman and Team USA led 7-0 after the first period.

It was more of the same in the eight minutes that followed. Rachel Fattal (Seal Beach, CA/UCLA/SOCAL) went bar down for an 8-0 lead and Kaleigh Gilchrist (Newport Beach, CA/USC/NYAC) delivered a smooth lob shot to go up 9-0.Courtney Mathewson (Anaheim Hills, CA/UCLA/NYAC) made it 10-0 on a power play strike from the near side and then Musselman added two more, the first on an elusive backdoor drive for a 12-0 advantage. Kami Craig (Santa Barbara, CA/USC/NYAC) capped the scoring in the half rising up out of the water to follow a rebound, stuffing the ball past the keeper for a 13-0 score at halftime.

Relatively speaking, scoring slowed a bit in the third quarter as Team USA managed just five goals. Craig added a chip shot to start and then Makenzie Fischer (Laguna Beach, CA/Laguna Beach HS/SET) scored two straight for a 16-0 mark. Clark and Gilchrist finished the scoring late in the quarter for an 18-0 lead going to the fourth.

The same duo, Clark and Gilchrist, scored the first two in the fourth and then Clark added another for a 21-0 lead. Kiley Neushul (Goleta, CA/Stanford/Santa Barbara) got on the board to make it 22-0 with a little over four minutes to play. South Africa broke the shutout bid with a score from Emma Hardham to make it 22-1 but Team USA responded with a goal from Steffens who shoveled the ball in near two meters. Ahead 23-1, Aria Fischer (Laguna Beach, CA/Laguna Beach HS/NYAC) put a bow on things with two straight goals to finish the match off up 25-1.