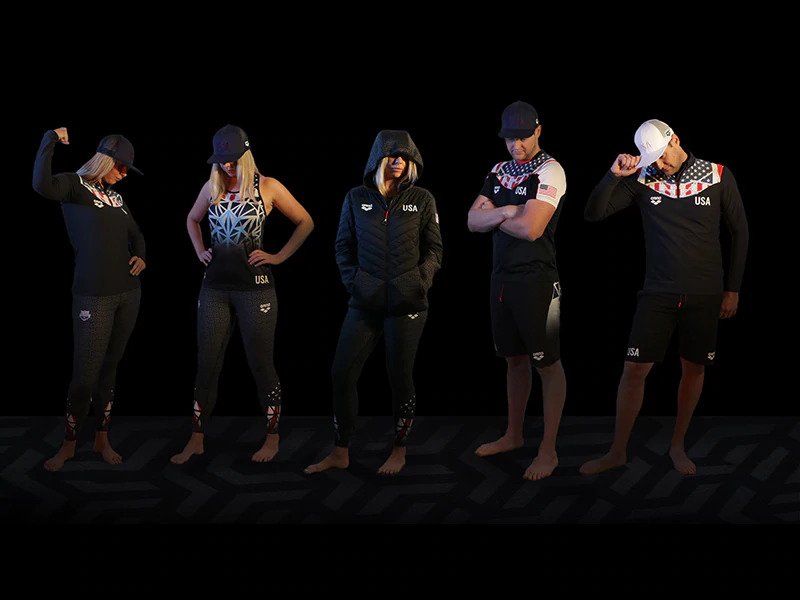 Arena is a SwimSwam Partner.

USA Swimming today unveiled an arena-branded kit that will serve as the official kit for USA Swimming at the Tokyo 2020 Olympic Games. The kit goes on sale to the public on Monday.

While there will be a separate kit determined by the USOPC, this kit in particular will be issued to each member of USA Swimming, who will wear the uniforms “within the competition venue in Tokyo.”

The collection is being called the Bishamon Collection. Bishamon is the Japanese name for Vaiśravaṇa, one of the “Four Heavenly Kings” of Buddhism, who are each believed to watch over one cardinal direction of the world. While Bishamon or Vaiśravaṇa is not unique or exclusive to Japanese Buddhism, it takes on special significance in Japan, where it is thought of as the god of war or warriors.

The Olympic Games next summer will be held in Tokyo, Japan.

As described by USA Swimming:

One of the Seven Gods of Fortune in Japanese folklore, Bishamon (or Bishamonten) is an armor-clad warrior god, a guardian deity who protects and brings divine favor in battle. He carries a spear in one hand and, in the other, a pagoda symbolizes a divine treasure house, whose contents he both guards and gives away.

The USA Bishamon Collection honors this spirit, celebrating the fighter that exists in everyone, and supporting them with arena’s distinctive armor so that they can be at their very best during the heat of the battle, whether it’s in a global competition pool or a community center training session.

For the collection’s design, arena combined the Bishamon’s warrior expression with the pattern of his armor, the Bishamon Kikko, inspired by the shell of a tortoise and representing longevity and good luck. The result is a design that symbolizes both protection and good fortune, with a singular ultimate goal: victory.

“Arena has truly outdone themselves with the Bishamon Collection, not only creating stylish pieces for both our athletes and fans but so seamlessly marrying the rich tradition of the Japanese culture with the heart and soul of our team,” USA Swimming Chief Commercial Officer Shana Ferguson said. “We look forward to seeing these pieces on the world stage, as well as across the social realm from all the fans cheering us on at home.”

Arena has been the ‘exclusive outfitter’ of the US National Swim Team since 2013.

The Tokyo Olympic Games were originally scheduled to be held in the summer of 2020, but the outbreak of the global coronavirus pandemic delayed the event until the summer of 2021. Pool swimming at the Olympic Games will now be held from July 24-August 1, 2021, though the Games are still being officially referred to as “Tokyo 2020.”

And why are all their heads down or facing away? Not very attractive either, or friendly.

Comments poll. Are these kits attractive and inspiring? Up for Yes, Down for No.

I wonder if USA Swimming ran this one by the new DEI committees that they keep working so hard to convince us they care about.

Hopefully they name the Tokyo 2024 kit the Mary Magdalene Collection.

Lol i guess Tokyo is being delayed until 2024 now…