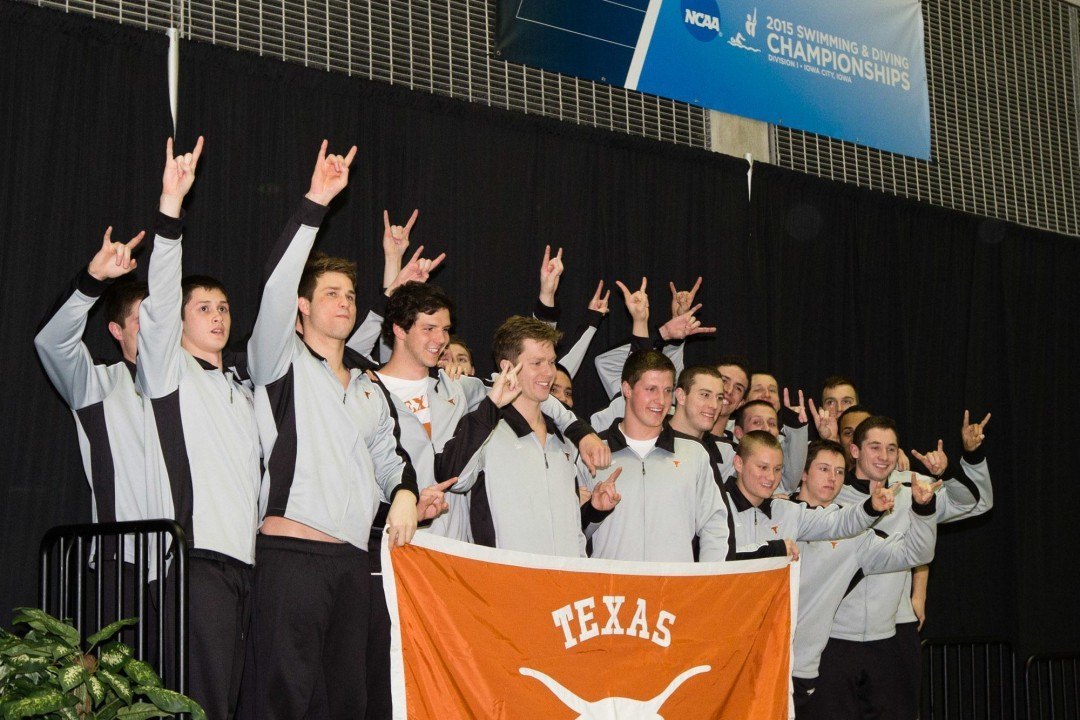 The University of Texas just announced that Wyatt Collins has been named assistant coach of Men's Swimming & Diving. Archive photo via Tim Binning/TheSwimPictures.com

The University of Texas just announced that Wyatt Collins has been named assistant coach of Men’s Swimming & Diving, filling taking the vacancy left by long-time associate head coach Kris Kubik, who announced his retirement earlier this summer after 34 years as Eddie Reese’s second in command.

For Collins, the new job is really more like of a promotion; Collins served as a volunteer coach with the Texas men’s swim team for the previous three seasons, the last two of which ended in Texas winning the NCAA National Championships (runners-up in 2014).  Previous to volunteering his time on deck he was a member of the Longhorns men’s swim team for one season (2011-2012), and before the University of Texas he swam two years at Boston University (2008-2010).

Collins cites Kubik as a mentor and credits him with for teaching him about recruiting, meet entries, team travel, and supervising team workouts.  Outside of the job, Collins also credits Kubik with being a mentor and lending an ear for anything personal he was going through.

Before beginning as a volunteer assistant coach in 2013, Collins spent the summer of 2013 as an age group coach for Nitro Swimming, one of the most successful clubs in the country.  In 2013 Collins earned a bachelor’s in history from the University of Texas where he was a two-time member of the Athletics Director’s Honor Roll.  Collins is also an accomplished triathlete and 2016 Ironman (70.3) World Championships qualifier.

I’m assuming he’s in his mid 20’s from the article. I’d like to know how someone can volunteer for 3 years at a job and afford to live in Austin, TX. It didn’t mention another job during that time.

Camp, club, parents….many coaches have to volunteer with colleges to get their foot in the door….at least, male coaches.

A couple of things…

1. I think he was a student for most of the time while he was volunteering.

2. Typically they don’t do press release items where they’d say anything irrelevant to the position. I’ve never read one that said, “and while working as a volunteer assistant he worked at Subway and drove for Uber on the side”.

I’ve been impressed with Wyatt since he first got to Austin. After watching him this last year work so well with Eddie, Kris and the guys it makes perfect sense and well deserved. Obviously, Kubik’s shoes are impossible to fill but Wyatt is a great coach and is great with people like Kubik is. Wyatt knows the Texas “Way”, stay humble, work your ass off, treat people right and good things happen. Congratulations Wyatt and can’t wait till March!

Texan way! I love that expression!

(and avoid gas stations in Rio)

Congrats to Wyatt and could not agree more with you Josh! I have the pleasure of sometimes sharing a Masters workout lane with Wyatt and he is a great person, a humble hard worker and a great fit for Assistant Coach with Eddie. Again Congrats to Wyatt!

Anyone who got chance to watch Longhorns at meets could see that Wyatt commands respect from his swimmers. When he is talking to them one on one, before or after swims, they listen to him. That can only happen if he is hard working and knowledgeable coach, and I am sure he is. I guess, this was the plan, for Kubik to retire earlier than Eddie, so Wyatt can have some years to spend as Eddie’s right hand. Plus, Eddie wants his assistant to teach technique Eddie way, so who better than Wyatt (it could have been any of his ex-swimmers, but obviously Eddie thinks Wyatt is the man). Maybe, Eddie decided to groom Wyatt to take over after he… Read more »

Huh? Bizarre hire to say the least. Thought Eddie would go after someone with better credentials. Hardly a replacement for Kubik.

There’s only one Kubik. Can’t replace him.

Collins has been with the team for three years, it’s usually better for everyone to have someone you know being promoted from within than hiring someone new. They know his coaching style and know how he operates

disagree. It’s not better if there are superior, more highly qualified candidates who can make a bigger contribution. I can think of many coaches off hand…but it wont matter inevitably as Eddie has a few more years at most before the program is turned over to a new HC.

Eddie more than likely knows what/who is the best fit is for the team. Qualified? The best fit is always the most qualified. #dontbetagainsteddie

Apparently Eddie thinks Collins is the best candidate, suggesting he also believes Collins will contribute more than other candidates would have. I’m sure we can all think of some great coaches, but Eddie’s worked with Collins for a few years now and probably knows better what he’s capable of than most.

Congrats to Wyatt! FYI, Wyatt comes from strong coaching pedigree. His dad is none other than John Collins, head coach of Badger Swim Club. Wyatt is energetic, focused and sharp. He will have plenty of support on multiple fronts. This team has plenty of great leaders that will step up to help keep the ship on course. Eddie knows his teams need to get better and faster. Always has… always will. No worries.

So I take it you know Wyatt well then.