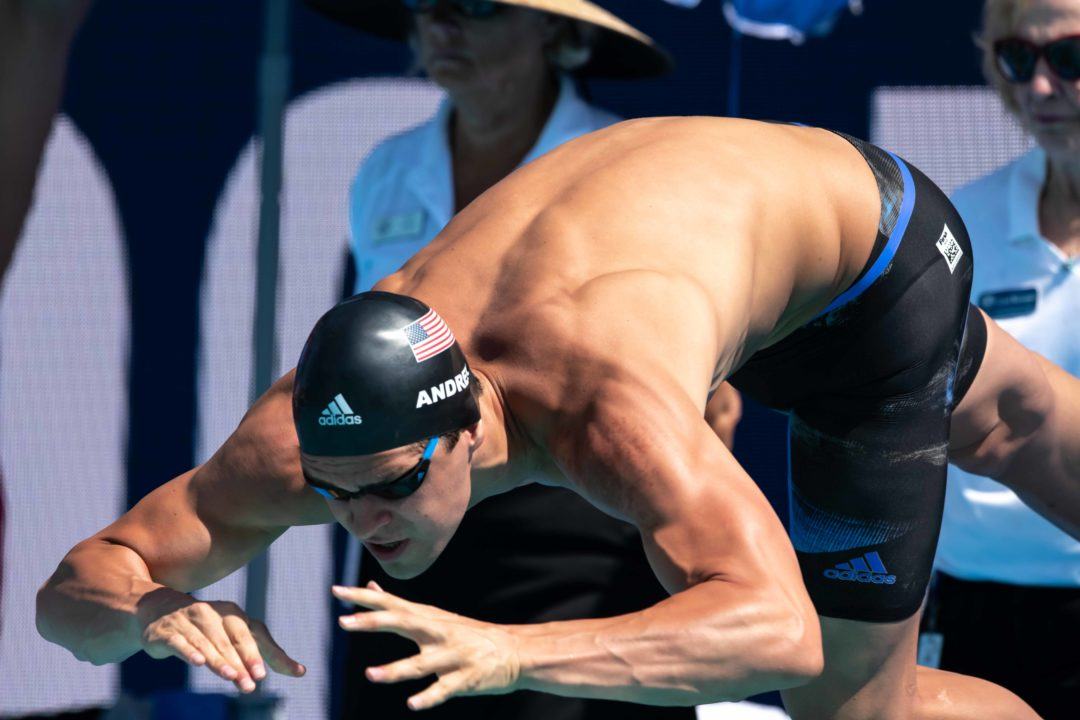 The defending World Champion in the 100 IM, Michael Andrew, will be the only American representative in the event. Archive photo via Mike Lewis/Ola Vista Photography

It’s not often that the United States leaves an event slot empty at a major international championship meet, but that’s just what will happen at the 2018 Short Course World Championships.

Michael Andrew, the defending World Champion in the 100m IM, will be the only American entry in the event often viewed by American coaches as a summer league or age group race (even though it is now a sanctioned NCAA event). Andrew will swim the race as one of 5 on his schedule in a sprint-heavy lineup that will likely include multiple relays as well. He’s entered in the 50 free, 50 breast, 50 fly, 100 breast, and 100 IM at the meet individually. He’s the top seed in the 100 IM in the absence of Russian Vlad Morozov, the World Record holder, with his next best pre-meet standings being the #4 seeds in the 50 free and 50 fly.

Among swimmers on the American roster, the next-fastest 100m IMer is Josh Prenot (7th in US history). The American entries in the 200 IM are Gunnar Bentz and Prenot.

The Americans will also leave an empty spot in the men’s 200 free.

On the women’s side, Melanie Margalis and Kathleen Baker are swimming the 100 IM: the same two swimmers as are entered in the 200 IM for the US.

I bet Dressel could throw down a wicked 100 IM

For sure. If he hit his turns (not a given in his first SCM meet) and was in Dressel c. 2017 form, that WR would be toast.

Dressel was just fine until June of 2018

Was that just injury (heard he got in a bike crash or something?), or over-training? Idk, he looked so good at NCAA’s. I mean he still had an okay Pan Pacs, but deffo disappointing relative to what people think he’s capable of.

I suppose we will get a better picture next LCM season. Still, this SCM meet should be fun. I hope he went all in for it, as it might be the only time in his career he gets the chance to do so lol.

Man this summer has CD tweaking. No 100IM against Vladdy? Why do you tease us Caleb, why??

Vlad isn’t swimming the 100IM either

Vlad is scared of Americans!