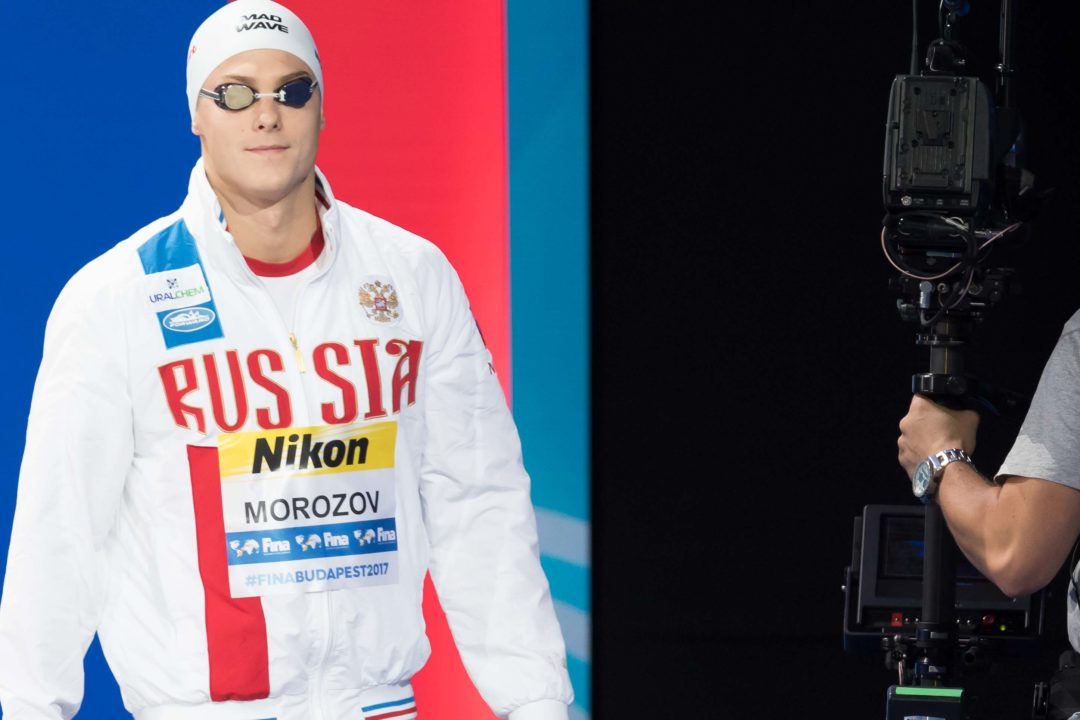 The Russian star swam two World Record times in the 100 IM at this year's World Cup Series and didn't lose the race once; but he won't swim the event at Short Course Worlds. Archive photo via Mike Lewis/Ola Vista Photography

Russian sprint superstar Vlad Morozov had an electric year at the FINA World Cup Series, where he won the title by a landslide margin of 171 points and took 22 event titles across freestyle, backstroke, butterfly, and IM disciplines. That included sweeps of the series in the 50 free and the 100 IM, and World Record breaking, then World Record tying, performances in the 100 IM.

Even after showing that versatility all fall long, though, Morozov has ratcheted back to his primary Olympic distances for next weeks’s World Short Course Championships: the 50 and 100 free. He’s the top seed in the 50 (20.31) ahead of Britain’s Ben Proud; and holds the same position in the 100 (44.95) more than a second ahead of the #2 seed: American Blake Pieroni (46.25). Morozov is the Meet Record holder in the 100 free, and while he won the 2012 title in both races, he took neither in 2016 where he had a bigger schedule (that included a silver medal in the 100 breast).

That doesn’t mean that Morozov won’t be busy, however. Of the 6 relays available to him, he swam on, and won gold medals in, 5 at the 2016 Short Course World Championships – with the exception being the 800 free relay. With Russia sending effectively a full roster, they’re contenders to repeat in all 5 of those relays, though the Americans have a better squad than normal (including Caeleb Dressel) and should challenge for those titles.

In his absence, the defending World Champion Michael Andrew becomes the top seed in the 100 IM in 51.16. But, just because Morozov isn’t racing doesn’t meant that Russia won’t be hot-on-his-heels: the #2 seed is Russian Sergei Fesikov in 51.22, and the #3 seed is Kliment Kolesnikov in 51.35.

If Morozov had swum the 100 IM, it would have given him triples in the evening sessions on both Thursday, December 13th and Friday, December 14th.

Wow
Not criticizing his decision, but if I were him I’d drop the 50 free instead of the IM because he’s so far ahead in that event

Especially with the one guy who could beat him not swimming it either. But I ain’t saying no if Dressel and Morozov want to give us a showdown in the 50. Missed that matchup by a year because Morozov left college early.

Interesting. I think he wants to focus on getting the WRs in the 50 and 100 free…

um Ben Proud in the freestyle?

wait, the British are coming now?

They are. Never really even announced a roster, just SURPRISE they’re on the start lists.

0
0
Reply
Will 37
Reply to  ERVINFORTHEWIN

Based on Chadwick’s winter nationals times and improvement curve, I think he is going to be good

Putting all my money on Andrew retaining his 100m I.M crown now, would be surprised if he didn’t break 51 as well. Still hard to believe Morozov went into that 2016 final with a 50.3 PB and could only muster a 52.83, a time slower than some of his World Cup prelim swims.