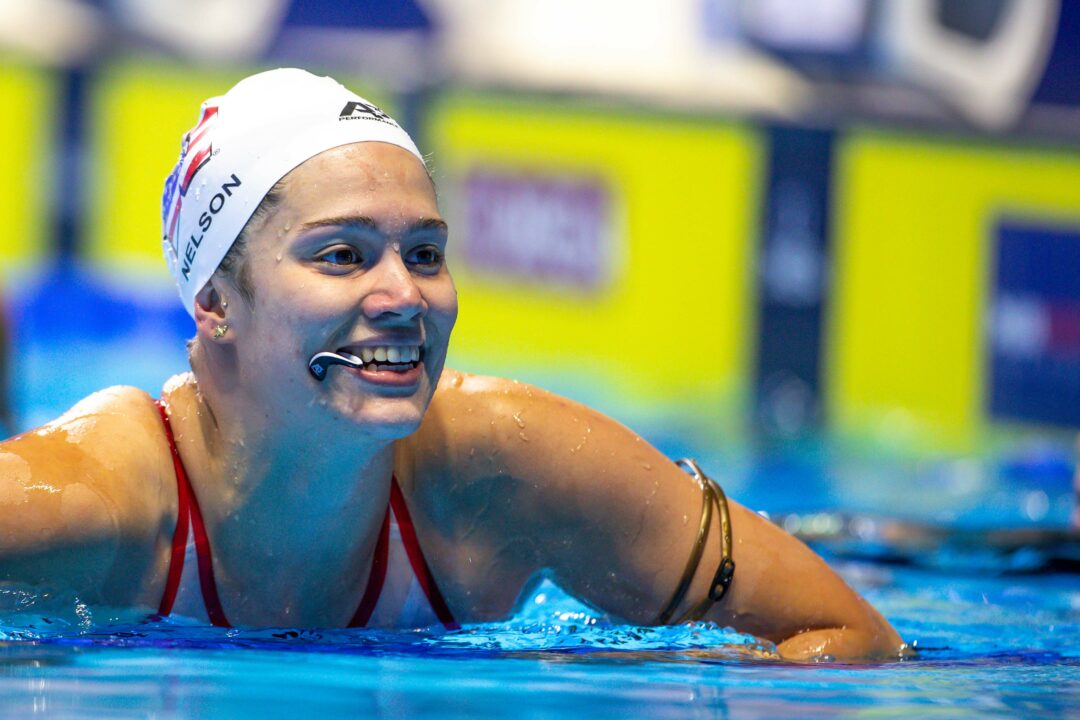 With six wins under her belt through two legs of the FINA World Cup series, Nelson has positioned herself to vie for the overall title this weekend in Indy. Archive photo via Jack Spitser/Spitser Photography

Murphy was an unstoppable force at the Short Course World Championships, winning five gold medals and becoming the first male to sweep the backstroke events.

Not that anyone’s surprised, but Beata Nelson has been absolutely tearing up the FINA World Cup circuit through the first two stops of the series.

Nelson, a 24-year-old American pro who was an NCAA star at the University of Wisconsin, has combined to win six events and finish as the runner-up twice through the Berlin and Toronto stops of the World Cup, making her the overall points leader with the final leg in Indianapolis to come this weekend.

Nelson won the women’s 100 back, 200 back and 200 IM in Berlin while placing second and finishing just one tenth shy of her American Record in the 100 IM, and then in Toronto, she had the same result in all three races, though she ended up going faster in three of them.

She saved her best for the last on Sunday night, as Nelson took down Canadians Sydney Pickrem and Summer McIntosh to win the 200 IM in 2:05.08, knocking three-tenths off her previous best time.

After placing second in the individual points standings and earning $10,000 in Berlin with 57.3 points, Nelson matched that showing in Toronto, scoring 58.3 to rank second behind Canadian Maggie MacNeil.

She now heads into the Indianapolis leg with a 2.7-point cushion on Siobhan Haughey for the overall title. The winner will win $100,000, and second place will get $70,000.

All of this success in the short course pool comes on the heels of Nelson being controversially left off the U.S. roster for the Short Course World Championships in December, something that comes as a result of the selection criteria being solely based on the U.S. National Team (selected via long course times).

Nonetheless, it’s been an outstanding month for Nelson, who heads to Indy with a ton of momentum and a hefty payday on the way.

Presumably the competitions at US National Trials and especially at World Championships are expected to be stronger than at World Cup. So the success at World Cup should not affect in general the selection procedure.
I wish Beata to get this 100K+ prize money. First of all as the payoff for the great efforts. And secondly because her example of a good but not elite (she still hasn’t pass selection for World Championships) swimmer who could make substantial earnings to support herself as a professional will make World Cup competition more exciting, attractive and respectful.