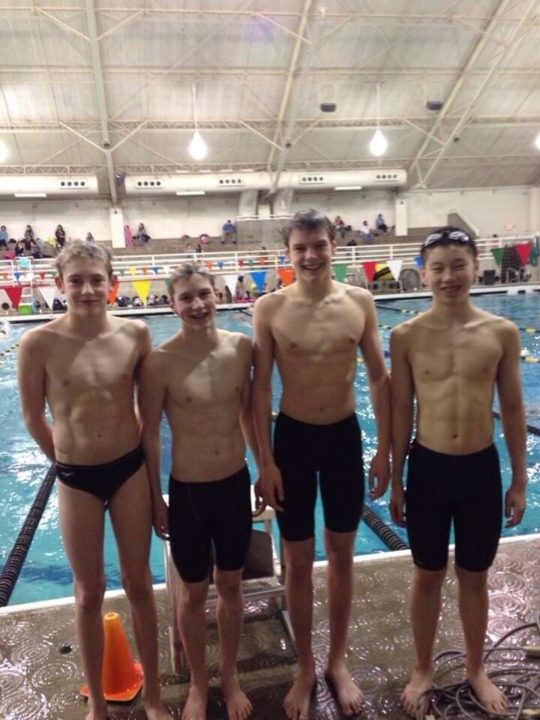 The Tualatin Hills Swim Club held a special “Last Chance Dual Meet” on Wednesday evening. This meet, which was essentially a sanctioned time trial, was purposely set because top sprinter Nate McFaul ages up soon, and the 11-12 boys wanted to take a run at a few National Age Group Records.

It was quite a successful run at that, as they snapped two records in three attempts on the day. First, in the 200 yard free relay, they swam a 1:34.40 to demolish by two-and-a-half seconds the 2010 record set by the Eagle Swimming Association near Houston. The old record was 1:36.80, and included swimmers David Morejon, Nick Rudy, Jonathan del Real, and Matthew Kraemer.

Then in the 200 medley relay, the same group of four (in a different order) combined for a 1:46.05. That broke the old record set in 2012 by the Pleasanton Seahawks at 1:47.44, with the quartet of Jonah Cooper, Timothy Yao, Tyler Lu, and Christopher Jhong.

Tualatin Hills’ lineup and splits are below:

Martinze, McFaul, and Corbeau all train directly under the supervision of one of the club’s assistant coaches, Ruth Stocks; Tim Larken coaches David Liu.

Full results from the event can be seen here.