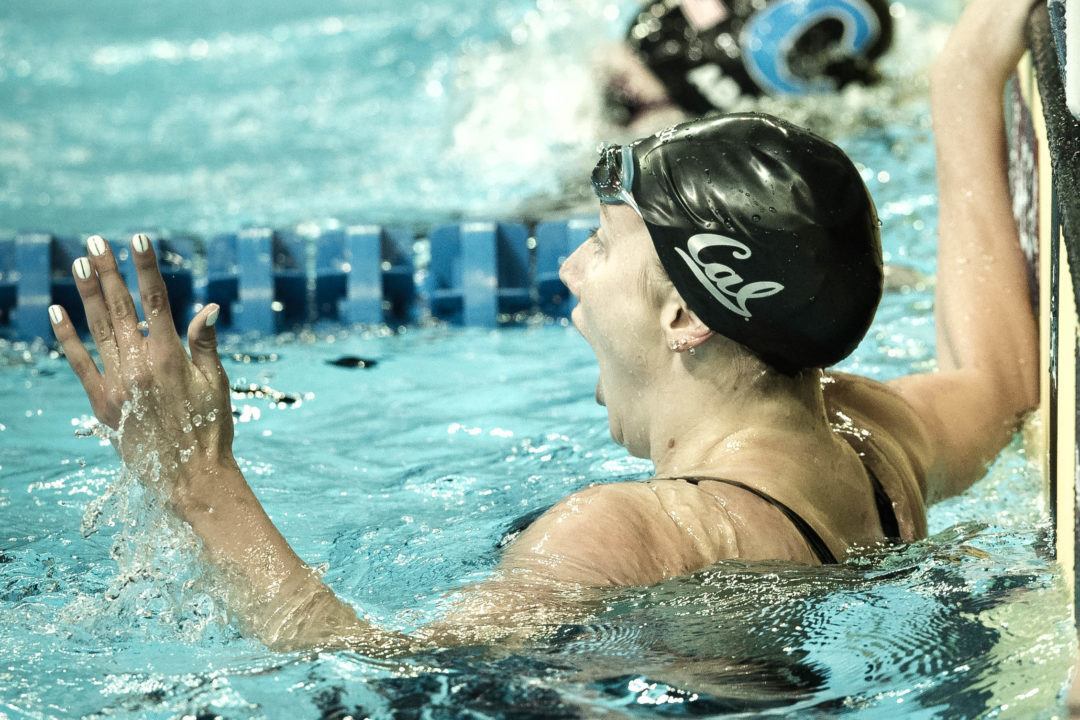 The 200 Free Relay is always a battle to the finish, and this year was no different. Current photo via Mike Lewis/Ola Vista Photography

TritonWear and Swim Swam are bringing you the best in swimming race analysis. With the power of TritonWear, you can have an in-depth analysis of your practice every day with zero effort. Stay up-to-date with this live NCAA race analysis by following TritonWear after visiting their full race analysis page through the link at the bottom.

The 200 Free Relay is always a battle to the finish, and this year was no different. Stanford came in strong after setting an American Record in the morning and taking the top seed of the event. However, Cal was only 5 tenths back and had left two of their top sprinters out for the morning swim: Abbey Weitzeil and Maddie Murphy.

The field was tight into the first 50 with only a few tenths separating the top 5 teams with Georgia’s Olivia Smoliga taking it out in a blazing 21.32 for an early lead using her powerful and lengthy underwaters where she gained ground on the competition staying under almost a second longer than the next best. Stanford’s Simone Manuel was on her heels with a strong 21.47 and Cal’s Abbey Weitzeil just behind her at 21.59. In the next leg, Stanford’s Lia Neal managed to gain ground and overtake Georgia Freshman Veronica Burchill to put Stanford in the lead with Cal trailing in third.

In the third leg, Stanford Junior, Janet Hu managed to hold the lead with more long underwaters with 4 seconds off the dive and over 5 seconds off the turn – however, Cal’s Amy Bilquist gained vital ground with a strong split of 21.26 to overtake Georgia, and narrow the gap to a minuscule 6 one hundredths of a second heading into the crucial final leg!

Stanford Junior Ally Howe took the Anchor position this evening against Cal veteran Farida Osman Anchoring the Bears. The two dove in at virtually the same time and were neck-and-neck at the turn, however, Osman broke out with a powerful stroke driving her forward with a significantly higher DPS allowing her to gain ground over Howe.

A critical example of where long underwaters are not always the winning ticket for sprinters as Farida Osman dominated the field with her above water speed driven by a high stroke rate combined with a high DPS after a quick underwater of 2.58 seconds while Stanford’s Ally Howe stayed under for 5.06 seconds off the final turn.

Both swimmers drove hard to the wal but the Women from California took home the glory as well as a new NCAA record with a blistering time of 1:25.59.