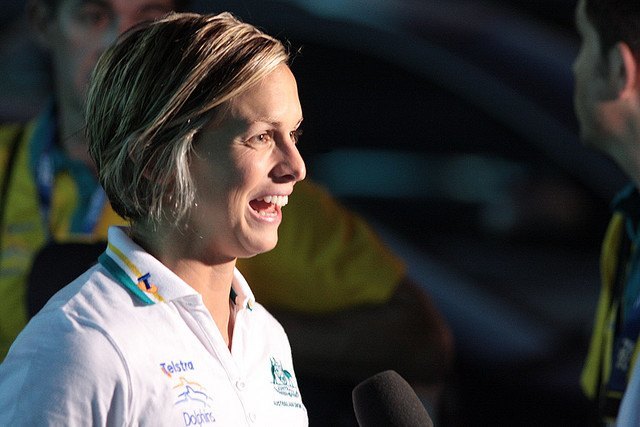 With just one day to go at the 2012 Australian Olympic Trials, chaos has kicked in. One of the comeback-kids...

With just one day to go at the 2012 Australian Olympic Trials, chaos has kicked in. One of the comeback-kids made the team, one missed it, there was a massive double-upset in the 200 breaststroke, and the men’s 50 free got incredibly fast (including the Missile). This meet was everything you’d want an Olympic Trials to be.

There were three big swimmers vying for Olympic spots after this meet after some period of retirement. Thorpe failed. Klim (see 100 fly semi) failed. But Libby Trickett succeeded on Tuesday, by way of placing 5th in the 100 free in 54.21. Though not guaranteed a qualification based on that swim, precedent and tradition presumes that she will at least be earned a prelims spot on the 400 free relay. Her ability to continue improving from round-to-round is what really separated her from her male counterparts.

The automatic qualifiers in this race line up for a very fast relay at that. Melanie Schlanger won in 53.85, which is a bit slower than her best time this season. She really came on strongly the first part of 2012 to reclaim a huge presence on the Olympic team. She will be joined in the individual race by 19-year old Cate Campbell in 54.01.

Behind that pair, and also swimming on the relay, were 17-year old Brittany Elmslie (54.08) and 16-year old Yolane Kukla (54.08). That gives the Aussies three teenagers in the top four of this relay, ahead of the 27-year old Trickett.

Rounding out the relay, very significantly, was Alicia Coutts in 54.25. She was the country’s fastest 100 freestyler last year, and though she wasn’t quite as fast at this meet, she should be back to a 53-mid by London.

Missing the relay in this final were Emma McKeon in 54.35 and Emily Seebohm in 54.89 – Seebohm looked a bit tired in this final.

Tess Wallace and Sally Foster. Those are your two Australian qualifiers for the women’s 200 breaststroke and the Australian Olympic Team. That means that Leisel Jones, two-time World Champion in the event, two time Olympic silver-medalist in the event, and three-time defending Commonwealth Champion in the event, did not make the squad. In fact, she finished only 4th here. This demonstrates where her focus has been since scratching this event at last year’s World Championships, and I think that she honestly only swam this race because there was nothing to lose (it came after the 100). Her time was 2:27.62.

That also means that Sarah Katsoulis, winner of the 2010 Common Wealth Games bronze medal in this event, won’t be on the team, as she was 5th in 2:27.83. Both women have to be disappointed with those times.

But Wallace and Foster have to be ecstatic, because they made this team without swimming all that fast. The 18-year old Wallace is a first-time Olympian after winning this race in 2:26.31, and Foster was 2nd in 2:26.51. Those were the only two swimmers who cleared the FINA Automatic qualifying time. Emma McKeon was 3rd in 2:26.90.

As a team, this was a big stumble for a team that swept the medals at the Commonwealth Games in 2010 and expected to be very deep.

As Trickett succeeded, Michael Klim fell short of his Olympic comeback in his final attempt in this 100 fly. He finished 14th in this 100 fly semi-final in 53.72 (slower than the prelims).

The top seed went to Christopher Wright in 51.83, followed by Nick D’Arcy (52.21) and Matt Targett (52.31). 30-minutes later, Targett had the 50-free semi-finals, so if anybody was slow-playing this semi, I think it was probably him. Geoff Huegill was also safely through the final in 5th.

James Magnussen made a small ripple in the prelims of this 50 free. In these semi-finals, he made a gigantic wave. Though his competitors really heaped up on speed here, he had no problem matching them with a 21.87 for the top seed. That is another lifetime best for him (now by 6-tenths in this meet) as well as the fastest an Australian has ever been in textile. And there’s still a semi-final to come.

But this 50 isn’t going to be a runaway like the 100 was. Eamon Sullivan was just .01 behind (21.88), and Matthew Abood is not far behind that in 21.92. Those three have separated themselves from the pack a bit, but other notable names to also make the final include Cameron McEvoy (22.32), Andrew Abood (22.34), James Roberts (22.39), and Matt Targett as the final qualifier in 22.54. Targett might have to consider scratching one of these two finals on Wednesday, as they’re back-to-back races there. His odds of qualifying in both under those circumstances are tiny.

This was another race dominated by youth, and 20-year old Daniel Tranter came away with his first Olympic bid by way of winning the men’s 200 IM in 1:58.19. He will be joined by another first-timer: 18-year old Jayden Hadler thanks to a 1:58.99.

Belinda Hocking and Meagan Nay moved ahead of the Olympic qualifying standard in the semi’s of this 200 backstroke. Hocking took the top seed in 2:07.79, which is the fastest time in the world this year. Nay also ranks in the top 10 now with her 2:09.30. Those two should be comfortably the top two in this race, but just as we saw in the 200 breast, you can’t sleep with young swimmers lurking.

That includes Mikkayla Sheridan in 3rd in 2:11.12. She wasn’t all that far off of Nay on any given 50, despite a time two seconds slower. She closed the race very quickly, and could make this a race in finals.