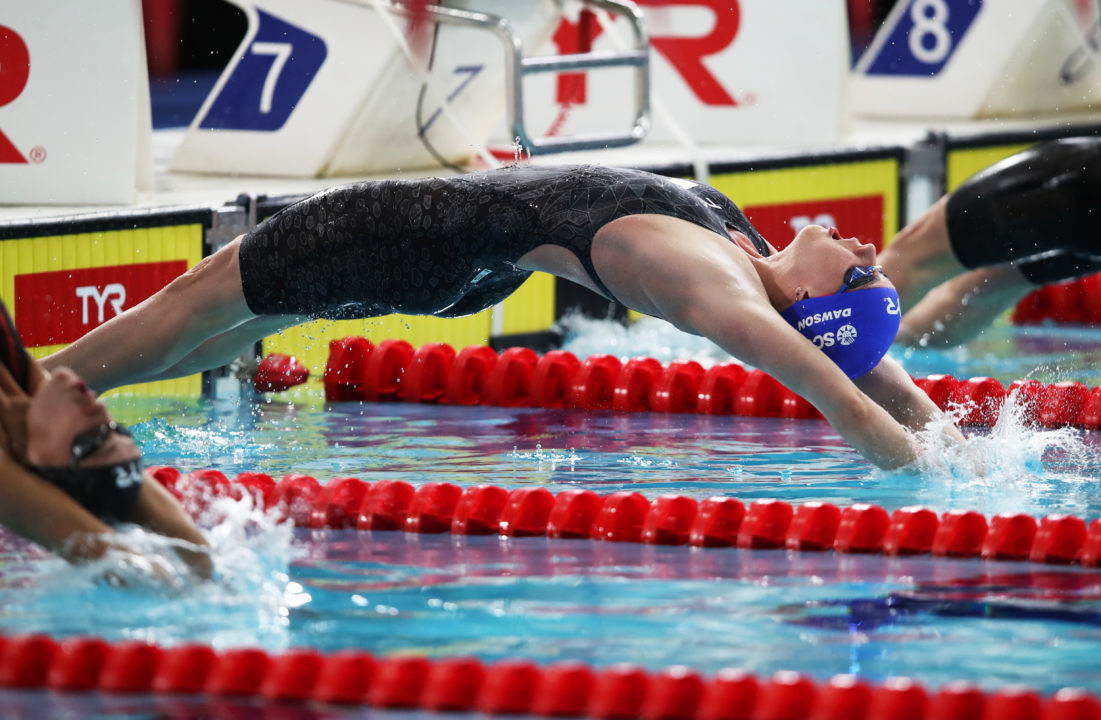 Kathleen Dawson and Kira Toussaint have set up a dynamic duel for tomorrow night's final of the women's 100m backstroke here in Budapest. Archive photo via Ian MacNicol for Scottish Swimming

Another European Championship record bit the dust, this time twice over the course of the two women’s 100m backstroke semi-finals.

First, Dutch woman Kira Toussaint churned out a massive 58.73, a time which not only rattled her own Dutch national record of 58.65 but a mark which matched the meet record set by Mie Nielsen of Denmark at the 2016 edition in London.

The very next semi-final, however, 23-year-old Katheen Dawson of Great Britain also threw down a near-lifetime best, crushing a mark of 58.44 to rank as the top-seeded swimmer headed into tomorrow night’s final. That sits just .20 off her own PB of 58.24 that renders her as the 2nd fastest British performer of all-time.

For Toussaint, the former Tennessee Vol already reaped gold here in the 50m back, so she is looking for a possible double gold opportunity here.

Splits for the two women’s records include:

Also in the mix is Russia’s Maria Kamaneva and Italy’s Margherita Panziera, who touched in semi swims of 59.30 and 59.53, respectively. As a dark horse, Dawson’s University of Stirling teammate Cassie Wild continues to improve, clinching the 5th seed in 59.75.

Of note, Israeli Anastasia Gorbenko, just 17, broke her own newly-minted national record en route to claiming the 6th seed. Opening in 29.01 and closing in 30.77, the teen scored a time of 59.78 to mark just the 2nd sub-minute outing of her career. In this morning’s prelims, she registered a time of 59.96 to clear the minute threshold for her first time ever.

Additional national records that bit the dust in the women’s 100m back include Ingeborg Loeying sneaking in with a new mark of 1:00.23 for Norway, while Nina Kost cracked a new Swiss national record of 1:00.35 this evening.

Crazy how much this event has improved recently, that these sorts of times just seem fairly routine now. Great swimming from both.