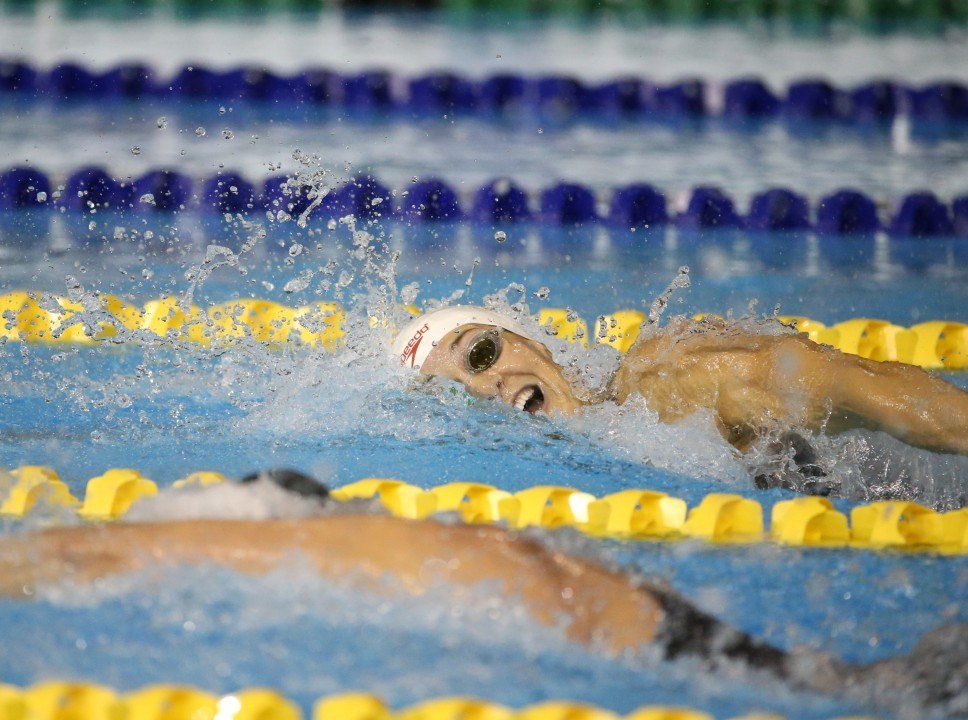 In the women's 200m freestyle American Allison Schmitt looks like a definite lock for gold. She's been under the Pan Am Games record multiple times this year and has the experience to be much faster than any one else in the field. Current photo via Chris Tanouye/www.ChrisTanouye.com

After a very eventful day one in swimming, the Canadians took to the lead in the overall medal count with three golds. They swept all women’s events on the first night of competition, and look to be in strong contention to grab a few more golds tonight.

Prelims will be the ultimate test. In the women’s 200m freestyle American Allison Schmitt looks like a definite lock for gold. She’s been under the Pan Am Games record multiple times this year and has the experience to be much faster than any one else in the field.

The remaining events on the women’s schedules have the potential to go in favour of the Canadians. Martha McCabe and Kierra Smith of Canada are a dual threat in the 200m breaststroke and both have potential to take the top seed heading into finals. The race should be between those two.

Canada’s got another pair of swimmers that could battle for gold: Dominique Bouchard and Hilary Caldwell. Both are top backstroke swimmers for Canada. Caldwell is arguably the favourite for gold due to her international experience, however Bouchard has been faster this season.

As for the men, the 200m freestyle is wide open. There are tons of players who could score gold. Someone is likely going to try to establish themselves this morning. Brazil’s Nicolas Oliviera, Canada’s Jeremy Bagshaw, Argentina’s Frederico Grabich, and Venezuela’s Cristian Quintero are surely all in the mix.

The men’s 200m breaststroke is another event without a definite favourite. Thiago Pereira of Brazil, BJ Johnson of the United States, and Thiago Simon of Brazil will all have the middle lanes in their respective heats.

Canadian Russell Wood has been having a fantastic season and will be looking to take the top seed in the men’s 200m backstroke heading towards finals.

Top seed Allison Schmitt established herself as the clear leader right out of the gates, leading the third and final heat of the women’s 200m freestyle and winning in start-to-finish fashion.

Schmitt was the only swimmer this morning under 1:59, and came dangerously close to Cynthia Woodhead’s Pan American Games record that was set all the way back i 1979. Schmitt has been 1:57 several times in the 200m freestyle this year and holds a 1:53 personal best, putting the record in jeopardy for tonight’s final.

Schmitt looks to be a lock, but the battle for silver should be very strong. Manuella Lyrio of Brazil was the second fastest this morning, over a full sceond behind Schmitt. She posted a 1:59.60. Her teammate, Larissa Martins, was a 1:59.62 to win the second heat.

Both are in a great position to take home the silver behind Schmitt as is Canadian Katerine Savard. Savard rocked a 1:59.74 to finish second behind Martins in heat two. There’s no denying she has the potential to get a podium spot especially with the home crowd cheering her on.

Savard was the only other swimmer to break two minutes this morning.

Cristian Quintero of Venezuela looked extremely strong and smooth for his entire 200m freestyle. He was very controlled on the back-half, finishing his race strong and taking the top seed heading into finals with a 1:48.42.

Quintero wasn’t very far ahead of the field. Going into tonight the men are a tightly bundled group. Michael Weiss of the United States also looked very smooth on the back-half of his swim, drawing power on the last 50 to win his heat in 1:48.55. He’s deffinitley in contention for gold.

Throw in wildcard Frederico Grabich and there’s a race to be had. Grabich broke the Argentinian national record in the 100m freestyle on three separate occasions during the first day of competition, showcasing a huge time drop of almost a second. He’s got speed, and could very well fight for his second gold of the meet.

Michael Klueh of the USA, Jeremy Bagshaw of Canada, and Joao De Lucca of Brazil, all products of the NCAA system, could be fast tonight. They were all under 1:49.

With no clear favourite, the 200m freestyle could go to any of the eight finalists tonight.

The much anticipated dual between Canadians Kierra Smith and Martha McCabe in tonight’s 200m breaststroke final will happen, but there are a few more players in the race than previously expected.

Smith did take the top seed in 2:25.41, building consistently to her lead throughout the race. She won her heat easily, breaking the Pan American Games record in the process. Annie Lazor of the United States followed behind her with a time of 2:26.37. With that time, she put herself in a great position to race the two Canadians and took the second seed overall.

McCabe was a 2:27.47 this morning which was good for the third seed. She looked smooth and effortless throughout.

Although Smith was very fast, traditionally she swims fast in prelims. She’s going to need to work for it tonight if she wants to claim gold. She has two very worthy competitors who will be fighting for gold as well.

On his way to taking the top seed and equalling the previous Pan American Games record, Jorge Murillo of Colombia set a new national record of 2:11.62. Murillo was the only swimmer under 2:12 this morning, dipping under the mark during heat one.

Top seed in the event prior to the start of prelims was Thiago Simon of Brazil. He won the final heat of the 200m breaststroke in 2:12.05, showing not many signs of fatigue.

Also looking extremely strong was Richard Funk. The Canadian battled it out with American BJ johnson in heat number two, ultimately stretching out to a lead on the last 100 and claiming the heat two win. Fun was a 2:12.22 which gives him the third seed and puts him in a good medal position.

Close finals with no direct leader seem to be a theme in the men’s events, and that’s just what’s going on here. With fourth seed Johnson going a 2:12.81 and Brazilian Thiago Pereira hitting a 2:12.89, the podium spots are anything but finalized.

It’s going to be a fight to the wall the whole way tonight with this packed group.

The two Canadians, Dominique Bouchard and Hilary Caldwell, are set up perfectly to finish 1-2 in tonights final as was previously anticipated. They were both much faster than anyone else tonight, especially Bouchard who hit her goal of going under 2:10.

Caldwell wasn’t far off what Bouchard went this morning, sporting a 2:10.15 at the touch. She closed her race very strongly as did Bouchard this morning, adding more excitement to the final.

The two should be with the field at the halfway tonight, and then take-off with 100 to go in order to race for the gold medal.

If anyone could spoil Canada’s 1-2 finish tonight it would be the Americans. Clara Smiddy and Kylie Stewart took the third and fourth seeds respectively. Smiddy was a 2:11.94, Stewart was a 2:12.30.

The current meet record stands at 2:08.99. There’s a very good chance it will take a meet record to win the gold tonight.

An unexpected favourite came out to steal the show this morning in the prelims of the men’s 200m backstroke. American Sean Lehane absolutely smoked the rest of the field on his way to a new Pan American Games record of 157.11.

That time broke Brazilian Thiago Pereira’s time by just 0.07 seconds. It also gave Lehane the top seed heading into finals by almost a full second and a half. His closest competitor this morning was American Carter Griffin.

Griffin was a 1:58.54 to win heat two in a close battle with Colombia’s Omar Pinzon. If Griffin can hold off advances from all other finalists tonight, there’s a big chance for a 1-2 finish assuming Lehane can come away with a win.

Carlos Omana of Venezuela set a new national record in heat three with a time of 1:59.81. That time made him the first Colombian to ever dip under 2:00 in the 200m backstroke. He took the fourth speed over last night’s 200m butterfly final.

The men’s 4x200m freestyle relay was a lot closer than most would have expected it to be. Team USA posted the top time in 7:19.18, however team Canada was right on their trail finishing second in 7:19.86.

Both the Americans and the Canadians didn’t use their top guns, so a very different race could be had tonight. A win for the Canadians tonight would be a huge upset. Jeremy Bagshaw will be on the relay tonight to spice things up.

Brazil was very far behind the two leading nations, sporting a 7:29.42. They as well didn’t put their ‘A’ team forward. They could likely be much faster in tonight’s finals.

I think you mean that Schmitt was the only swimmer under 1:59.