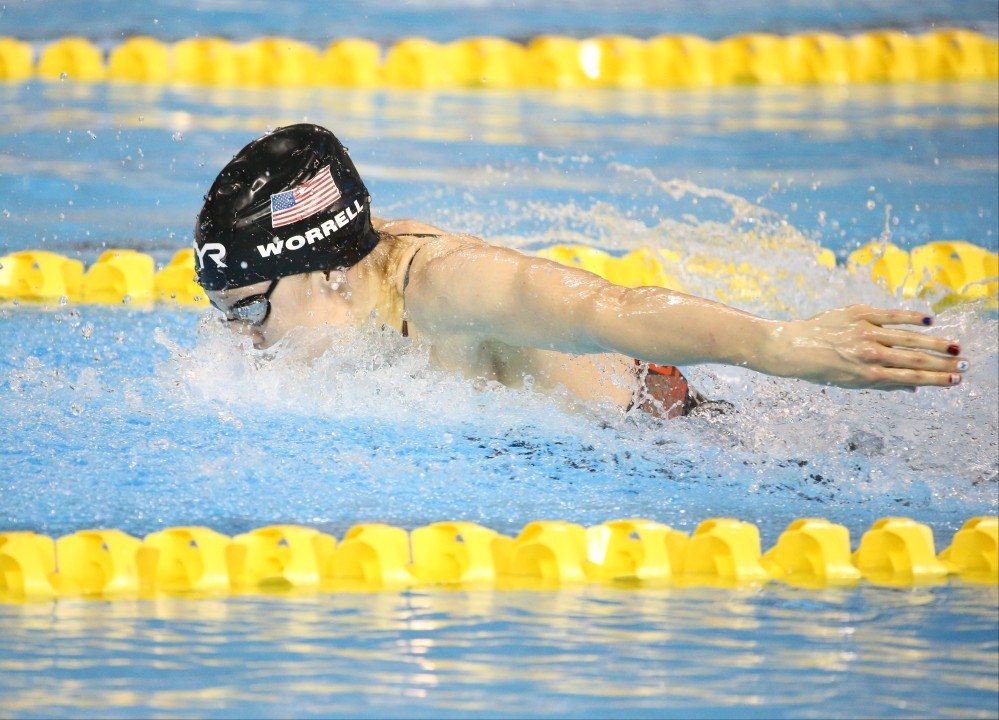 After an extremely eventful week in Toronto, we at Swimswam compiled a list explaining just why these Pan American Games were the best ever. Current photo via Chris Tanouye/www.christanouye.com

This past week’s Pan American Games were an onslaught on various national record books, and one more national record to fall on the last night of action went to Bahamian teenager Joanna Evans.

Prior to the Toronto 2015 Pan American Games, Natalie Coughlin had only won three individual international medals since the 2008 Beijing Olympics. Three is still an amazing feat, but for someone as decorated as Coughlin, it was a decline from her usual performances.

This past week in Toronto saw a new Coughlin come to light, a Coughlin reminiscent of the 2008 Beijing Olympics. Coughlin was fierce in the 100m freestyle, swimming a 53.85. That time was the fastest she went since 2010 when she won the 100m free at the Pan Pacific Championships.

Coughlin set a new personal best in the 50m freestyle with a swift 24.66. That’s one of the first times Coughlin has set a best time in years in an event, showing absolute progress heading forwards towards Rio.

Often thought to be off the table, Coughlin swam an incredible 100m backstroke to come within 0.11 seconds of her best time. Leading off the prelims team in the morning with a 59.20, Coughlin came back and split a 59.05 to leadoff the finals team en route to her 60th international medal ever.

With a stronger-than-ever Coughlin back in the water, and her achievement of 60 international medals, Coughlin is now very much in the running to make the 2016 Olympic team in the 100m backstroke and 100m freestyle. That would also give her a prime spot on two relays.

2. THE EMERGENCE OF THE CANADIAN WOMEN

The Canadian women stepped things up dramatically at the Pan American Games. Edged on by a home crowd, they took home six gold medals including two 1-2 finishes.

Starting with the women’s 100m freestyle, Chantal Van Landeghem made her case for being one of the top sprinters globally. With a 53.83 time, Van Landgehem won the 100m freestyle over Natalie Coughlin. Van Landeghem also constantly split 53-lows on the relays to show her consistency and strength.

Audrey Lacroix has been one of the best 200m butterflyers for some time now. The 2014 Commonwealth Games champion added another notch to her belt, claiming victory at the Pan Am Games. Heading into worlds, Lacroix has a very strong chance of making the final.

One of the most impressive aspects of the Canadian women’s performance was the 4x100m freestyle relay. There they beat a very solid American squad which had both Coughlin and Allison Schmitt, in order to come first. In doing so, they also broke the Canadian national record.

The 1-2 finished showed how strong the Canadian women are in both backstroke and breaststroke. In the 200m breaststroke, Kierra Smith took the gold over her teammate Martha McCabe. That solidified a 1-2 finish for Canada.

In the women’s 200m backstroke, Hilary Caldwell finished ahead of Dominique Bouchard, and the two of them also secured a 1-2 finish for Canada.

Emily Overholt is another reason the Canadians are fairly safe for the next few years. The 17-year-old shows tons of promise, especially in the 400m IM. Despite a DQ for a non simultaneous touch on her breaststroke, Overholt managed to swim a 4:35. Heading into worlds, regardless of the disqualification, it has to give her confidence.

Overholt also bounced back shortly after to win the 400m freestyle in a very gutsy swim, showing that she, along with the rest of the Canadian women, are ready to put things behind them and start going for gold.

In the majority of events, it took a time that would rank the individual in the top 10 world rankings this season in order to win.

On night one, all individual swims took a top 10 ranked time to win. That included the men’s and women’s 100m freestyles and 200m butterflys. Although global rankings for relays aren’t considered for this argument, it also took a Pan American Games record to win both 4x100m freestyle relays on the first night of competition.

Heading into night two, both the men’s and women’s champion in the 200m freestyle racked up a top 10 time in the world this season. The women’s 200m backstroke also featured a top 10 ranked time. The only relay of the night, the men’s 4x200m freestyle relay, was won in Pan American record timing.

On the third day of competition, it took two top 10 times and a Pan American Games record (relay) to win. Following that up on day four, an incredible six events (every event other than the men’s and women’s 400m freestyles) took a top 10 time in the world this season to win.

On the last day of competition, two out of four individual events featured top 10 worldly times to win, and two more Pan American Games records were set in the relays.

The Pan American Games have never been this fast. With the onslaught of records and top 10 times, it truly showed a change in level of competition at these games.

Arianna Vanderpool-Wallace has quickly been on the rise to becoming one of the top sprinters. A competitor for the Bahamas, her bronze in the 100m freestyle made her the first Bahamian swimmer ever to win an individual medal at the Pan American Games.

Vanderpool-Wallace struck again in the 50m freestyle, where she became the first Bahamian swimming champion in Pan American Games history.

Along with Vanderpool-Wallace, many countries who don’t traditionally steal the international spotlight managed to put up some strong performances at the meet.

Swimmers like Frederico Grabich proved just how fast they really are. Grabich, an Argentinian sprinter, took almost an entire second off his 100m freestyle personal best to post a new national record of 48.11.

There were plenty of young American swimmers who managed to step things up at Pan Ams and show that regardless of how they swam at the 2014 U.S Nationals (American qualifier for the 2015 World Championships), they’re prime candidates for Rio.

With the times they put up, there’s no denying that they could be red-hot at the U.S Olympic Trials.

Throw in some fast freestyle split on the relays for Michael Weiss, some great IM swims from both Max Williamson and Gunnar Bentz, a great sprint performance from Josh Schneider, and amazing performances all around by Allison Schmitt, and many of the swimmers who were on the Pan Am team and not the worlds team have the potential to make next year’s Olympic team.

I agree! There were some wonderful swimming performances at both the WUG and Pan Am’s this year! I am crossing my fingers that most of the US athletes in Kazan will be able to top the times posted by their counterparts at those meets. I hope US fans won’t have to say, “If only (insert swimmer’s name) had made it onto the US World Team”, TOO many times!

You forgot to mention Sierra Schmidt’s 800 free, that moves her up as well and in a good spot for her to challenge second behind Ledecky next year 😉

Has anyone found Natalie Coughlin’s 100 backstroke videos from this meet yet?

There have been videos of all other days but nothing for the last day so far on youtube.

Your wish is granted.
https://www.youtube.com/watch?v=rt-9KA6P60s