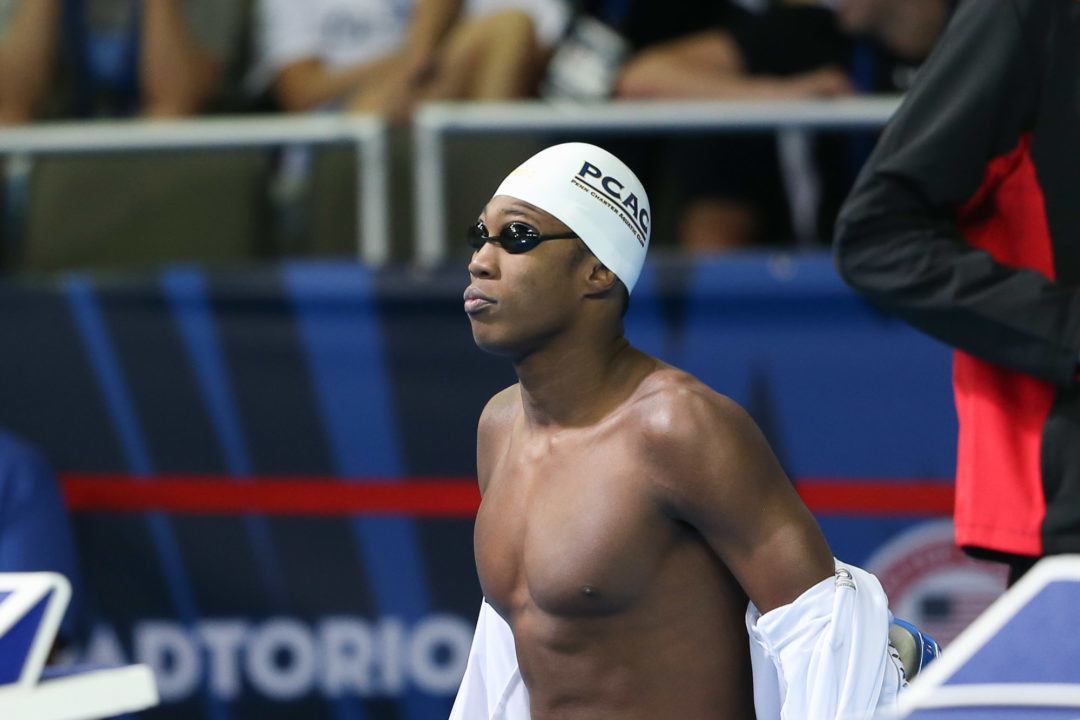 Top ranked recruit Reece Whitley has announced his verbal commitment to Cal for the 2018-19 season. Archive photo via Tim Binning/TheSwimPictures.com

The top ranked recruit in the boys high school class of 2018 Reece Whitley has verbally committed to swim for Cal. Whitley posted the announcement via twitter Saturday.

Very excited to announce my verbal commitment to the University of California, Berkeley! #GoBears pic.twitter.com/A28LKCwaOa

He’s the sixth top 10 recruit to make their verbal commitment, and the fourth out of the top five. He’s the first one ranked in the top 20 to commit to Cal. Other top commitments so far include #2 Drew Kibler verballing to Texas and #4 Cody Bybee committing to Arizona State.

Despite Whitley being Cal’s first top 20 commitment, he is the best of the class, and they have been exceptional at getting top recruits in recent years. Last year they nabbed #1 and #2 in Ryan Hoffer and Sean Grieshop, in the 2016 class they got #2 Michael Jensen and the 2015 class landed them #1 Andrew Seliskar and #3 Michael Thomas.

Whitley is best known for his breaststroke abilities, boasting bests of 51.8 and 1:52.3 SCY which instantly put him in NCAA A-finals. But he’s much more than a breaststroker, solid all-around, especially in the 200 IM where his best of 1:43.93 is contention for a second swim at NCAAs as well. It also works out well that Cal’s current top breaststroker Connor Hoppe has one year left, so Whitley will slot in as soon as he leaves.

There’s not much Whitley hasn’t accomplished in his young career. He has done damage on the U.S. junior scene in the breaststroke events, and has made an impact internationally as well. At the 2015 World Juniors he won silver in the 100 breast and took 4th in the 200, and followed up with a bronze in the 100 at the 2016 Junior Pan Pacs.

At the 2016 Olympic Trials he was a semi-finalist in both breaststroke events, placing 13th and 14th overall respectively and gaining valuable experience.

Of all the swimmers who qualified for the NCAA A-final in either the 100 or 200 breast this past season, only one of them wasn’t a junior or a senior. This indicates that the current crop of freshman and sophomore breaststrokers in the NCAA is relatively weak, and once Whitley arrives he’ll likely be doing some serious damage.

Here’s a look at his best times:

Cal’s relays are gonna blow up with Reece and Ryan in there.

Josa will be gone, I think?

sorry my bad, realised Schooling will be gone by the time he comes in