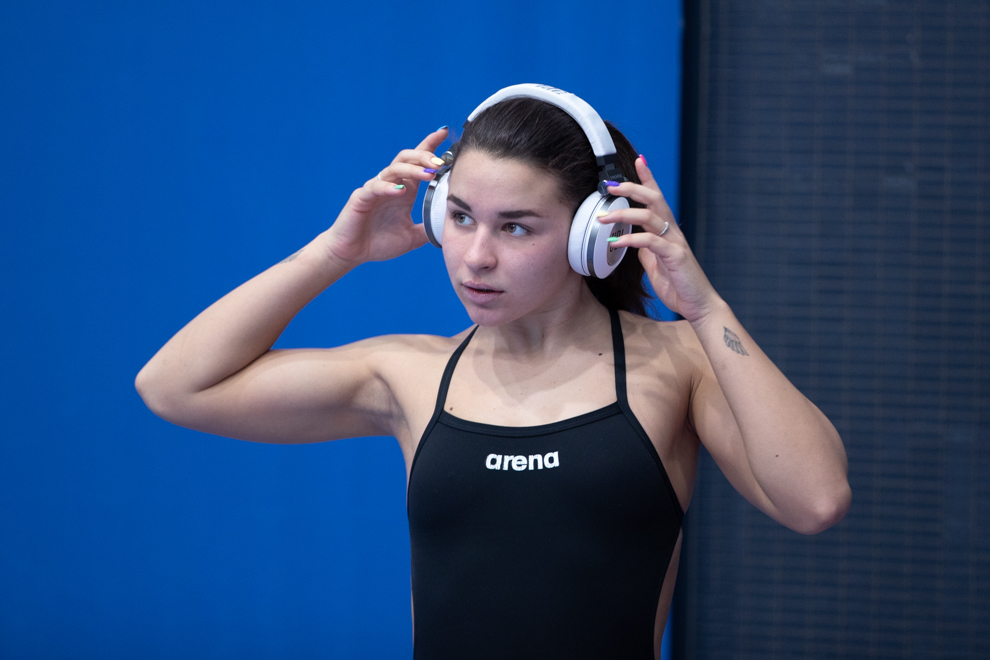 Ajna Kesely nearly broke her lifetime best in the 400 free tonight in a triumphant win. Archive photo via “Rafael/Domeyko Photography”

The home crowd was electric in Budapest’s Duna Arena, and the Hungarian swimmers fed off of that energy with two big wins in the first two events by their teenage stars. There was a lot of fast swimming today, and several swimmers continue to position themselves well heading into championship season this summer.

Here are five races that stood out to us from day 1 in Budapest:

1. Ajna Kesely nearly sets personal best en route to upset Chinese stars in 400 free – Kesely is one of a sizable group of young distance swimmers on the rise, and she took down two other teenagers in that group tonight: China’s Li Bingjie and Wang Jianjiahe. In the first event of the night in Budapest, Kesely harnessed the crowd’s energy and split a fantastic race. She was out in 2:02.33, then rolled out two 31.1’s and two 30-mids over her final four 50s to clock a 4:05.92, less than a second off of her season best. Kesely looked triumphant after her win, in which she defeated the Chinese 400 free record-holder Li and Chinese 800/1500 free record-holder Wang. Nobody was within 1.5 seconds of her. Coming that close to her best time in May is very encouraging, and this summer we’ll see if she has a drop coming — it seems inevitable.

2. Kristof Milak continues Hungarian momentum with a mid-season 1:53 in 200 fly – Right after Kesely’s energetic win, Milak stepped to the blocks with Hungarian legend Laszlo Cseh as well as 2012 Olympic 200 fly champion Chad le Clos. Letting le Clos get out to a lead after the 100, Milak stayed under 30 seconds with two 29’s on the back 100 to blow past a fading le Clos, winning big in 1:53.64. That’s less than a half-second off of his season best (and world #1 time) of 1:53.19, and he’s looking like a main contender for gold in the event this summer at Worlds.

3. Fearless racing from Italy’s Margherita Panziera in the 200 back – The Italian record-holder Panziera has seriously upped her game in the backstrokes over the last two seasons, and she’s elevated herself in the 200 back to be a legitimate international threat. Up against Iron Lady Katinka Hosszu (in her first race of the day) and Australian Emily Seebohm as well as Hosszu’s countrymate Katalin Burian, Panziera was out first in 29.74, two-tenths off WR pace, and out-split the field on every other 50. She had a startlingly quick 2nd 50 (31.4) and held it down with two 32’s on the back 100. Finishing in 2:06.41, less than a second from her lifetime best and Italian record of 2:05.72 from Italian Nationals, Panziera defeated Hosszu (2:08.16) and Seebohm (2:08.89) with grace; her head still and stroke smooth but powerful.

4. 39-year-old Nicholas Santos breaks South American record in 50 fly – Age is just a number, and Santos continues to break barriers regardless of how old he is. Santos, who turns 40 in about nine months, blasted a 22.60 to win the 50 fly today against WR-holder Andrii Govorov. For Santos, that’s a new Brazilian and South American record, and he takes .17 off of his season best to move to #1 in the world rankings this season. He still sits third all-time, behind Govorov (22.27) and Rafael Muñoz (22.43).

5. Fabio Scozzoli scares Italian record in 100 breast – Defeating a tough field which included GBR’s Ross Murdoch and Russia’s Anton Chupkov, Scozzoli held off their late charges and hit the wall first. His time, 59.05, was almost three tenths ahead of his old best (59.33), while he was just off of the Italian record, a 59.01 from teenager Nicolo Martinenghi. Scozzoli, who is 30 years old, shoots up to #4 in the world this year.

Despite there wasn’t much of competition in this race Ajna made it exciting. It is always a pleasure to see teenage swimmer being so happy of the win against strong field She probably isn’t spoiled yet by big money. So the $10,000 prize is very welcome.
And despite of all that do you know who is going to swim this event from Hungary in Indianapolis? Your super star.
I don’t want to hurt feelings of Hungarian fans (their country is the host of this meet), but can they explain me, why?
Look who will race in three weeks in this event:
Smith, Margals, Flinkinger.
It’s a great environment for Kesely to shine. No Ledecky, no… Read more »

Ajna and her coaches have already their preparation plans for the Worlds, and the race in the USA wouldn’t fit in. She will participate at some races in Europe. Milák Kristóf won’t race in Indianapolis either, he will go to the Japan Open instead where he can meet Sakai, Seto, Horomura, that will also be worth seeing!

Well, it looks like the Milák Kristóf’s coaches and ones of Kesely have different views on importance of racing in the meets that provides required level of competition.

I absolutely love Milak’s 200 fly for more than just the fact that he is very fast!

He still can’t decide on the perfect strategy, but his times are ridiculous anyways. His races are all different, because he is a ridiculously talented swimmer, who is still learning and maturing race by race.

Imo, all he has to do to get that elusive :51, or break the WR is to stay in shape, and figure out the perfect pacing. From the bold 52 first 100 to 58 untapered back end, we have seen it all from him. Ha has the speed, ha has the endurance, he has the motivation. He has it all in him, they just have to find a… Read more »