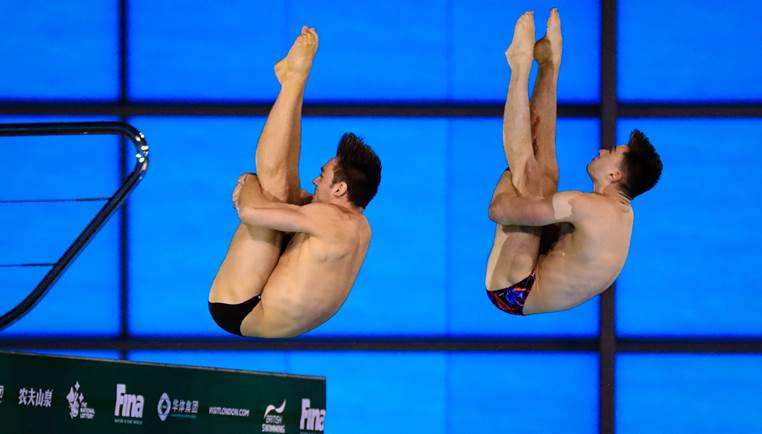 The 5th day of European Aquatics Championships diving saw the men compete on the 10m synchro, while the women took to the 3m springboard.

On the platform, it was Thomas Daley and Matthew Lee who came away with the gold medal for Great Britain, holding off the Russian team of Aleksandr Bondar and Viktor Minibaev to win their country it’s first gold of the European Championships. Daley was the bronze medalist at the 2016 Olympics in the event and took bronze individually on the 10m at the 2012 Olympics.

Last year’s silver medalists, the team of Oleh Serbin and Oleksii Sereda from Ukraine fell to a 5th place finish after earning the lowest score in the field on their fourth dive in the finals. Up to that point, the duo was in third, just six points behind the Russian team.

In the final individual women’s event of the week, German Tina Punzel came away with the win over Italy’s Chiara Pellacani. Punzel started the finals strong, claiming the top score on her first two dives. Despite a weak performance on her third dive, she regained her composure and finished strong for her first gold of the European Championships. Punzel was the bronze medalist in the event at the 2019 European Championships.

Last year’s champion on the 3m, Inge Jansen fell to 10th this year. Jansen has already been named to the Dutch National team that will be competing at the Olympics later this year.

I think Matthew Lee also won Gold. Maybe he deserves his name in the title too 😁