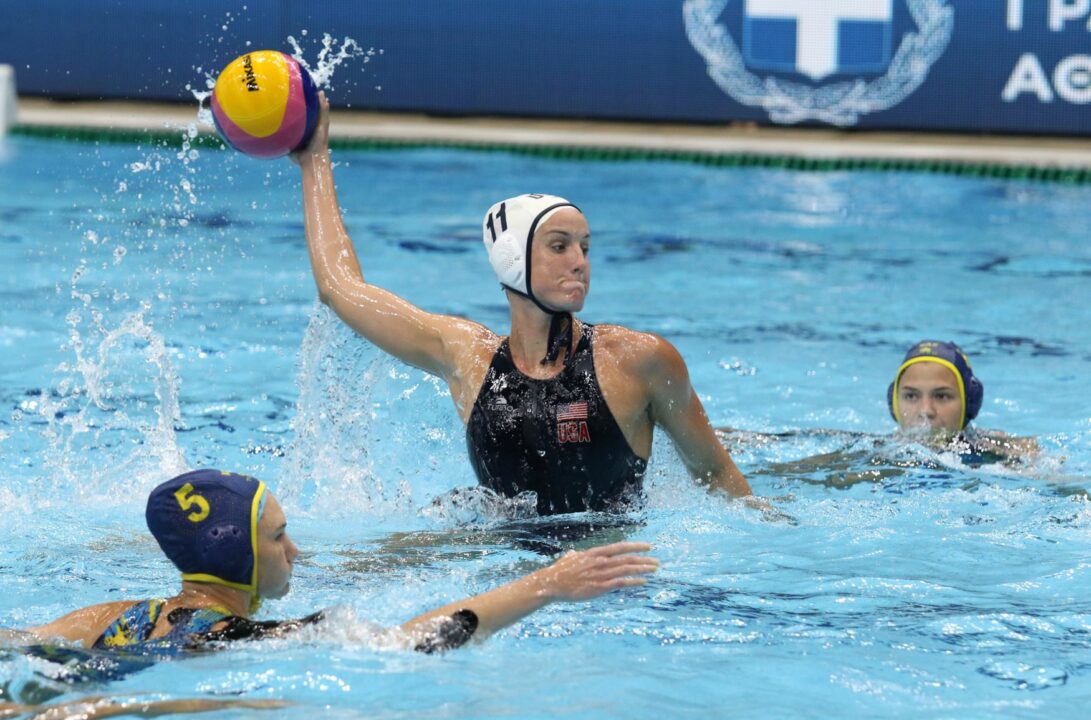 In a lopsided Championship match, the firepower of the USA offense was able to keep the typically smothering Spanish defense at bay. Stock photo via fina-athens2021.com

In a lopsided Championship match, the firepower of the USA offense was able to keep the typically smothering Spanish defense at bay. The Americans jumped out to a 4-1 lead at the end of the 1st quarter, which they maintained in the 2nd quarter, heading into halftime up 7-4. The 2nd quarter would prove to be Spain’s best of the match, however, and the U.S. went up 12-4 in the 3rd quarter. The Americans ultimately won the match 14-5 for a massive victory, and the United States’ 3rd-consecutive Olympic Gold medal in women’s water polo.

In a surprising turn of events, Spain, who largely progressed through this 2-week tournament by winning low-scoring defensive battles, were completely outmatched on defense. The U.S. defense kept Spain to just 16% shooting efficiency (5/32). The American defense blocked nearly half of Spain’s shots (15 of 32) from even making it to the goalkeeper. Importantly, the US defense was able to block or deflect 7 of the 13 extra player shots that Spain took. displaying just how well the Americans played defense today.

Conversely, the U.S. continued to hum along on offense, shooting 54% efficiency. American goalkeepers Ashleigh Johnson and Amanda Longan combined to save 71% of the shots that came their way.

Hungary beat ROC 11-9 after a back-and-forth battle throughout the match.. The match was tied 2-2 at the end of the 1st quarter, then Hungary had a big 2nd quarter, outscoring ROC 5-3 to head into halftime up 7-5. ROC then punched back in the 3rd quarter, outscoring Hungary 3-0 to head into the 4th quarter up 8-7. Hungary had the final word, however, scoring 4 goals in the 4th quarter to ROC’s 1, which resulted in the 11-9 final score.

Hungarian starter Vanda Valyi was huge for his team. Playing 18 minutes, Valyi put up 3 shots during the match, scoring on all 3. Two of those goals came on extra player shots. Another starter, Natasa Rybanka, was only in for 4:50 of the match, but shot once and scored.

The Hungarian goalkeeper, Alda Magyari, also played a pivotal role in Hungary winning. Magyari saved 10 of the 19 shots that came her way, a 53% save rate. Compare that to ROC keeper Anna Karnaukh, who saved 6 of 16 shots, which is a 38% save rate.

ROC had a tough time shooting on the match, putting up only 29% shooting efficiency. They were, however, helped by Anastasia Simanovich coming off the bench to score 2 goals on 2 shots.

Outside the medal matches, there were matches for 5th-8th place. Australia bested Netherlands 14-7 in the 5th-6th match, while Canada beat China 16-7 in the 7th-8th match. With those results, here are the final standings for women’s water polo at the Tokyo Olympics:

Update.
USA has won the women’s basketball gold. 7th in a row. 55 games won in a row. Wow! That’s crazy impressive. By far the greatest team ever in all team sports. They have lost only 1 game in official competitions since 1996! Congrats.
And honestly they were not as vulnerable since a very long time. Important players absent compared to Rio. A team not built in the best way. Not a real #3 in the roster like Catchings or Moore before. Lack of youth. Ridiculously short team training period before olympics. As result it was weak in terms of team in the first part of the competition. And the new format didn’t help them. I think the… Read more »

Dawn Staley had a game plan and executed the game plan to perfection. The game plan was not reliant on Sue Bird and Diana Taurasi to provide the offense.

It looks like that weird loss to Hungary in pool play really focused the attention of the team. Other than a pretty shaky first half against Russia in the semifinal they were solid the rest of the way.

As for our men, I believe they were the youngest men’s team in the entire tournament and they certainly at times played like it. Hopefully they will be more seasoned, mature, and cohesive three years from now in Paris.

Congrats to US women in water polo.
They have also won the gold in beach volley.
Weird they have won only the silver in softball. I thought it was exclusively a US sport.
They will likely win the gold in basketball (despite a ridiculously short period of training together before the olympics) and they are also in the volleyball final.
They have also won the bronze in soccer.
Not bad.

On the men’s side it was a close game in basketball but US men prevailed over France. It’s the best French team ever and it was far from the best possible US team. Added to the fact that unlike other nations the US players had… Read more »

Not only did the U.S. men fail to medal in 3×3 basketball, the U.S. didn’t even qualify a men’s team for the Olympics!

USA sent a team of minor leaguers. What do expect if you don’t take the competition seriously? No worries in France, since the event will not be even contested.

Hopefully, golf will be contested in France.

The women’s golf tournament was gripping at the Tokyo 2021 Olympics.

Thus ends all debate, Maggie Steffens is a legend.

While we’re on the subject of France and swimming, what’s happened to the once great French freestyle sprint talent? Someone sounded an early warning sign several years ago that the French age group talent pipeline was failing to produce the next generation of great athletes and this first showed up in the European juniors. The British seemed to have met the challenge of developing age group talent and this was shown on the medal podium at Tokyo.

So glad to see water polo coverage on SwSw! Thank you.