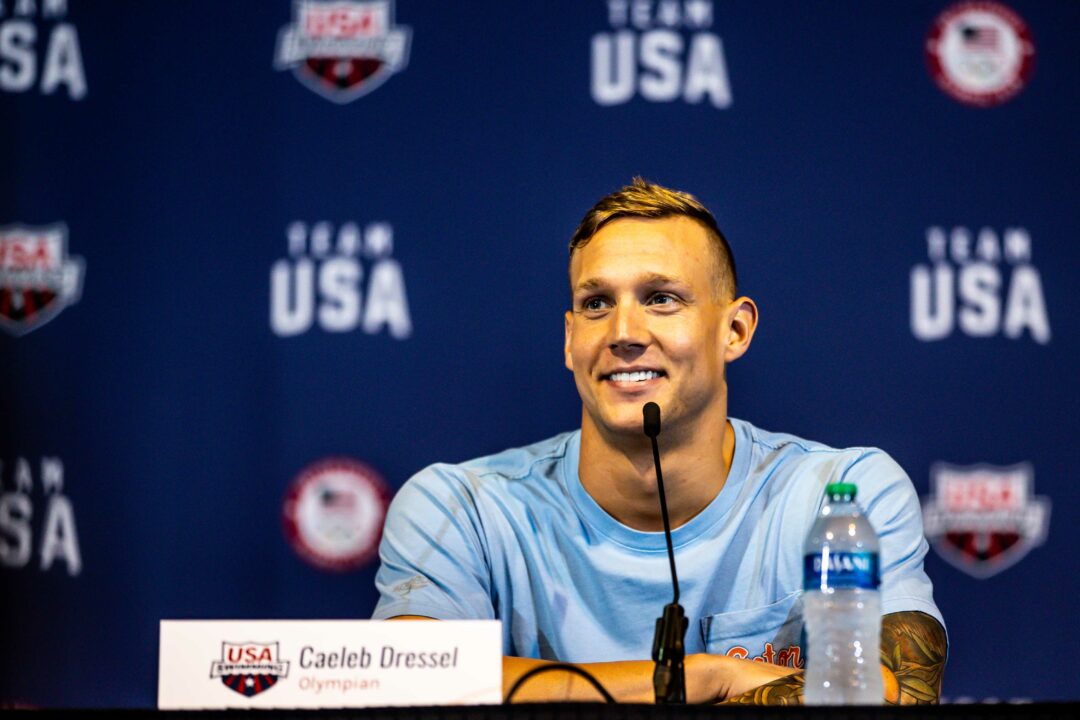 World Record holder, Caeleb Dressel is one of only two members of the US Olympic swimming roster that was born on a Friday. Current photo via Jack Spitser/Spitser Photography

With the Tokyo Games not far away, it’s time for some fun statistics on the birthdays and ages of the 50 swimmer United States Olympic roster.

The Olympians this year were most likely to be born in the months of July or August. 15 of the 50 athletes were born in either of these months. Interestingly though, the least common months were May and June. Only four athletes total were born in these two months.

A few athletes will be able to celebrate their birthday’s during the Olympic Games. Simone Manuel will turn 25 on August 2, Alex Walsh will turn 20 on July 31, and Erica Sullivan will turn 21 on August 9, right after the conclusion of the Games.

One unique birthday is Lydia Jacoby’s. She was born on February 29 which makes her a leap year birthday. Katie Ledecky has a birthday full of luck as her birthday is March 17, which is celebrated in the much of the world as St. Patrick’s Day. Ledecky is of Irish descent on her mother’s side, and took Irish dance lessons until age 11.

I’m expecting some oddly specific horoscopes this month then.

I believe Cullen Jones also has a February 29th birthday. Maybe there’s something special about that date for swimmers

Some couples with fast genetics had a ~busy~ thanksgiving.

The turkey wasn’t the only thing getting stuffed that Thanksgiving

Malcom Gladwell has entered the chat… he would say it’s not surprising at all that may and June are underrepresented while July and august are over represented. Considering most summer championship meets are held in July or august, people with later birthdays would be at the high end of their age group, while those with may and June would be at the low end of their age. Younger swimmers get positive reinforcement, selection for better teams, etc.

Wonder if you’d get a similar distribution with January/February/March with swimmers that qualify for NCAAs, given that SCY meets are held in March. I’d also have to imagine that swimmers born in March might inadvertently gravitate towards SCY rather than LCM because they’d be at the top of their age groups at the SCY championship meet and bottom at their LCM championship meet.

Or I could be overanalyzing all of this and it’s completely random.

Who wrote this article

Speaking of February 29th, I think it would be really cool to have that birthday, have red hair, and be left-handed. You’d have the whole package!

Speaking of left-handed people, I wonder how many on the National team are southpaws. Swimming is one of those rare sports — unlike baseball, bowling, and tennis — where the handedness of the player is not clear while performing it.

Probably just your breakout stroke in free/back would indicate it.

Also, people who are generally more dominant on their right side tend to bring their left foot back on their start. This might not be as strong of an indication though.

Lydia has only had four birthdays.

Amazing that the average age of women Olympians is 22. Wasn’t that long ago when college was the finish line for most elite women.