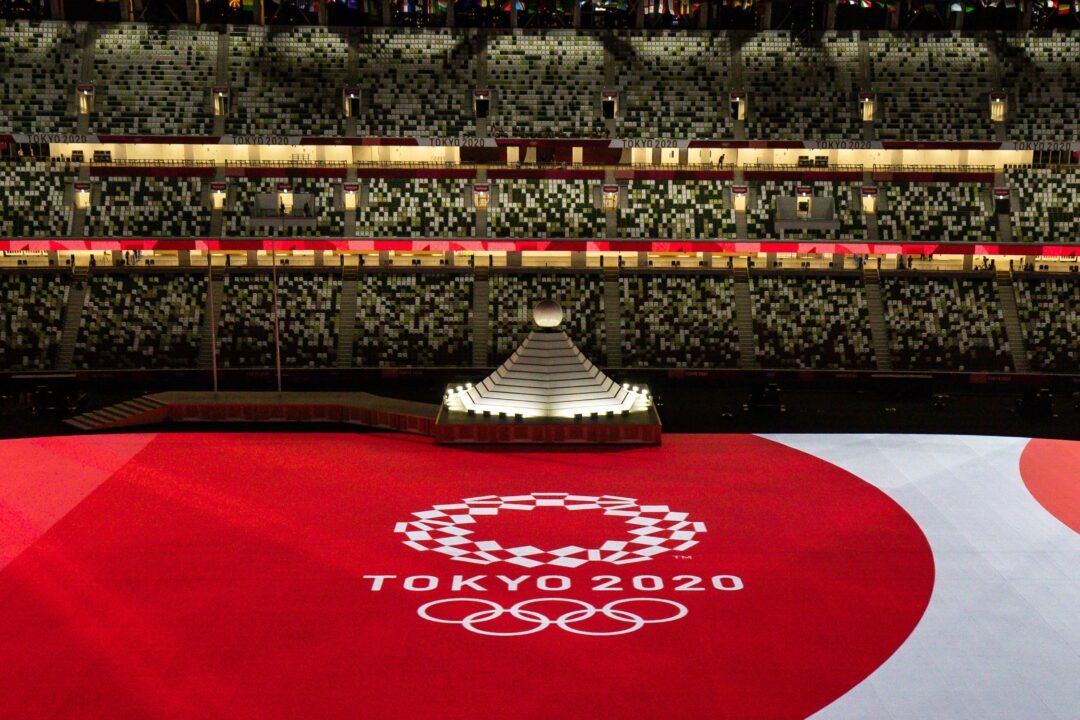 With the Olympic Games now in full swing, this series from SwimSwam looks at some of the leading news outside of swimming as athletes around the globe contest their Olympic events in the Japanese capital. Paralympic news will also be featured ahead of the Games which are due to begin in Tokyo on August 24th.

After Simone Biles exited the competition due to concerns over her mental health, the United States’ Suni Lee was able to step up in her teammate’s place, claiming the gold medal over Brazil’s Rebeca Andrade and Russia’s Angelina Melnikova.

Entering the final event, the floor exercise, Lee held the lead by the slightest of margins over Andrade. With the gold medal on the line, Andrade slipped up, stepping out of bounds on two occasions during her routine and falling just short of the top of the podium. Andrade finished with a final score of 57.298, not far behind Lee’s 57.433.

For the United States, Lee’s victory means the Olympic winning streak for the All-Around event continues to five straight games. Starting in 2004, the title has been won by Carly Patterson, Nastia Liukin, Gabby Douglas, Simone Biles, and now Suni Lee.

With a total area of just 23.6 miles and a population of only 34,000, the nation of San Marino, which sits surrounded by Italy on all sides, won its first Olympic medal. That medal came in the women’s trap shooting event, as Alessandra Perilli claimed the bronze medal.

The oldest republic in the world, San Marino nearly won their first medal nine years ago in London when Perilli finished in a three-way tie for the silver medal. In the tiebreaker, she came up short, becoming the only athlete of the three to not come away with a medal. She will now bring home bronze to a country that boasts a population lower than over 1,000 of the United States’ cities.

Already within the Olympic Village, Sam Kendricks of the United States and German Chiaraviglio of Argentina test positive for Covid-19, excluding from competing in the Games. As well as the pair, the entire Australian Track and Field team spent time in isolation after having direct contact with someone who tested positive for the virus, although they have since been released.

Kendricks is one of the most high-profile athletes to have tested positive for the virus, as he is the defending Olympic bronze medalist and defending gold medalist from the 2019 World Championships in Doha. USA Track and Field and United States Olympic and Paralympic issued a statement on his situation saying:

“In alignment with local rules and protocols he has been transferred to a hotel to be placed in isolation and is being supported by the USA Track and Field and USOPC staff. Sam is an incredible and accomplished member of Team USA and his presence will be missed.”

While Kendricks is the defending World Champion, Chiaraviglio is the current South American champion. He wrote in an Instagram post:

“It is very hard to process something like that, it will surely take me a long time. We knew this Olympic game was different and with different rules, and here I am, it’s my turn. I am isolated in a hotel where I will spend several days, and where the main objective is to take care of my health. I thank the people who were and are close and all those who sent me their messages of love and affection. Living this is very difficult, but it will also pass.”

This title makes it sound like Suni only won because Simone wasn’t there… how about we change it to just Suni wins gold and celebrate one of the greatest achievements for this young woman.

I ditto this. Simone withdrew because she had the ‘twisties’ and therefore felt uncertain about how she would perform. Thus, had she decided to go ahead and compete there is no proof or evidence that she would have performed at the Gold level because of the twisties that she had been experiencing.

I just knew that Sunni Lee nationally was Hmong since a lot of them settled in Minneapolis around 20 years ago. Anyways, it was great she was able to step up to the plate when Simon Biles pull out and win the all around tittle.

Many Hmong refugees were also re-settled in Central California since the 80s, and North Carolina. Really inspired by her story and the support she gets from her dad. It realy shows the contributions and drive immigrants bring to this country and how we benefit when society includes and develops everyone’s talent.

Slight correction though: nationally Suni Lee is American; ethnically she identifies as Hmong.

Oh no, so now we get to hear 50 times a day what Sunni Lee is gonna be having for lunch.

Describing what Biles is going through as “concerns over her mental health” does a severe disservice to her and minimizes it, imo. (It makes it seem like she’s not competing because she’s sad, or something.)

There’s no real comparison to getting the twisties to something that can happen in swimming, the risk would be like if all the water was suddenly removed from the pool while the swimmers were diving off the blocks.

Now that’s an interesting possibility I hadn’t thought of.

By the way, Steve, are you that amazing 50 free swimmer from Syracuse from the early 2010s?

I love that her parents are refugees and now their daughter is an Olympic champ!

This woman deserves to have her accolades without mention of what Simone Biles did or did not do. I feel like people want to put an asterisk next to her and that’s not fair

I think the title could’ve done without “In Simone Biles’ Absence.”

Congratulations to Suni Lee. I’m delighted to see her getting gold, especially after facing many very serious family issues in recent years and with all US hopes in this event suddenly being concentrated on her after Biles withdrawal.