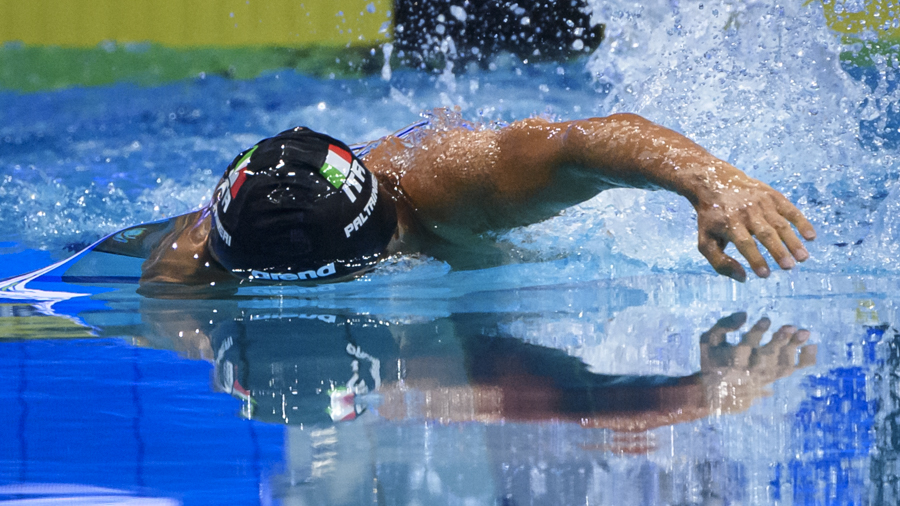 The men’s 800 free is making its Olympic debut this year, along with the women’s 1500, and the mixed medley relay. We’ve seen the men’s 800 competed at the World Championships for a very long time, but Tokyo 2020 marks the first time men’s freestylers will have the opportunity to add the event to their Olympic schedules. Due to this, we’ve already seen a few swimmers notably seem to shift their focus from the 1500 to the shorter 800.

One such swimmer is Italy’s Gabriele Detti, who won Bronze at the 2016 Olympics in the men’s 1500, but seemingly dropped the event after 2017. Detti enters the meet with the 2nd-fastest personal best in the field – 7:40.77, which he swam for Gold at the 2017 World Championships. He followed up his 2017 Gold with a 5th-place finish at the 2019 World Championships, where he swam a 7:43.89. This year, Detti has swum 7:46 at both the Italian National Championships, and the European Championships. We know that Detti has what it takes to earn a medal in this crowded 800 field, and if he’s able to get back to his 2017 form, he could win Gold.

Standing firmly in Detti’s way on his path to a potential Gold medal is fellow Italian star Gregorio Paltrinieri. Paltrinieri is the top seed in this field and has the fastest lifetime best of the group. He’s also the only swimmer in the field to have broken 7:40 in the event, which he did when he won Gold at the 2019 World Championships in 7:39.27. Paltrinieri has been exceptional in the 800 free for years, following up his 2019 season with a 7:40.22 in 2020, and a 7:41.96 so far in 2021.

Paltrinieri would be the hands down favorite in this event if not for his mononucleosis diagnosis last month. It was reported that Paltrinieri only experienced mild mono symptoms, and he’s told reporters that he’s feeling “great,” however, it should be noted that even mild mono cases can cause lingering fatigue. Even so, the 800 is Paltrinieri’s first event, and his shortest. When you consider how consistently fast he’s been in the 800 for years now, he’ll still be a major competitor in Tokyo.

Norway’s Henrik Christiansen is in a similar situation to Aubry. Christiansen is the reigning World Championships Silver medalist, thanks to his lifetime best 7:41.28 performance in that meet. However, since then, he’s only been under 7:50 again once, when he swam a 7:47.99 at the European Championships in May of this year. Like Aubry, we know Christiansen has the ability to win a medal in this event, maybe even Gold, because we’ve seen him race at that level before in this Olympic cycle.

Perhaps the swimmer posing the most significant threat is Ukraine’s Mykhailo Romanchuk, who has been a model of consistency in the 800 free since 2018. In 2018, Romanchuk swam a 7:42.96 at the European Championships, which was his fastest time of the year. Then, he clocked a 7:42.49 in April of 2019, which would prove to be his fastest time of 2019. In 2020, Romanchuk posted a 7:43.90 in March, and this year, he’s already been as fast as 7:42.61. Although Romanchuk is the 4th seed and has the 5th-fastest best time in the field, he might pose the biggest threat to paltrinieri simply because we can confidently project that he will be right around 7:42 in Tokyo. What makes Romanchuk so deadly here is because we don’t really know if Christiansen, Aubry, and Detti will get back down to that speed, and we also don’t know if Paltrinieri is truly 100% healthy.

Australia’s Jack McLoughlin is another extremely dangerous swimmer in this field. McLoughlin is the only medal-contending swimmer in the field who has swum their lifetime best in 2021. At the Australian Trials in June, McLoughlin posted a 7:42.51, just under his previous best of 7:42.64, which he swam at the 2019 World Championships for a 4th-place finish. If McLoughlin is able to match his Trials performance, he’ll be right there in the mix of medal contenders. If he’s able to go another lifetime best, we may just see McLoughlin standing at the top of the podium when it’s all said and done.

Austria’s Felix Auboeck, a product of the University of Michigan, enters the meet as the 9th seed, with a 7:46.72. Auboeck’s 7:46 came in April of this year, and was a breakthrough swim for him, taking 3 seconds off his lifetime best. The performance also put Auboeck in great position to make a run at earning a lane in the final.

Tunisia’s Ahmed Hafnaoui, just 18 years old, swam a lifetime best of 7:45.54 just one month ago at French Nationals. The swim suddenly put Hafnaoui in the top 8 seeds for the meet. If he matches his June performance, he’ll have no problem finishing in the top 8 in prelims.

Dark Horse – Bobby Finke (USA): Bobby Finke enters the meet as the 12th seed, with his personal best of 7:47.58. Finke swam a 7:48.22 at U.S. Olympic Trials in June, which earned him his first Olympic berth. Finke much more of a contender in the men’s 1500 later in the meet, but his SCY (Short Course Yards) dominance can’t be overlooked. He’s displayed a level of consistency that’s rarely seen in the sport in his yards swimming, and if his LCM racing can catch up to that, he could make waves in this event.

Aubry went >8min at Europeans and had a serious injury up until March I believe.

Wellbrock is an absolutely interesting case. He has a strong PB in the 400 free (3.44.35 swum on this Spring, when he had other two sub-3.45 swims), faster than Paltrinieri and Romanchuk, and – we know – he’s so good in the 1500 free, and a fast finisher too. So Wellbrock has all the characteristics to be a tremendous 800 freer. So, why in this race his PB is “only” a 7.43.03 swum on Spring2019? I think that if Wellbrock will be very focused on this first race, differently that at Gwangju (but at Worlds19 Swimming Pool races were after OW races), he’ll be a main contender for gold. At Gwangju he swam 7.53.7 in the heats failing to advance… Read more »

I think he can win it.

Paltrinieri is a big question mark, curious to see how he recovered from mono. He’d deserve to win at least one event

where is Franko Grgić?

he holds the junior world records in the 1500

he had an injury and isn’t swimming in the Olympics

The 800 IMO is a fascinating—and underrated—event. You have 1500 guys coming down and 400 specialists going up—should make for an interesting Olympic final. I think in the coming years we’ll be seeing much faster times in this event. A lot more sub-7:40 swims (though that thoroughly absurd 7:32 WR is never going down).

Oh it can, and it will! but not for a long time

it is the toughest event, for sure. Basically 2 near PB 400s, racing from 200 and then starting the finishing sprint at 600

I think the writing is on the wall. Wellbrock was 3:44.3 presumably without a full taper. That probably signals his intent in this event more than anything else. No one in the field could match that time in the 400, and his 1500 times

Paltrineiri’s mono diagnosis opens up what was looking a clear cut decision. He might still do it but there has to be a question mark.

With that in mind, there’s an asterisk against Paltinieri for gold. Think Romanchuk is a very solid podium bet. Final place between Detti & Wellbrock. Bearish on McLoughlin (a commodity that has not performed well away from home)

McLoughlin swam a then PB to get 4th at 2019 worlds. How is that not performing well?

I stand corrected; ONE swim of medal contender class in 3 World/Olympic level meets.

Not exactly a strike rate to strike fear into the hearts of his adversaries ??

Maybe he will get it together this time, here’s hoping he will but I’m not brimming with confidence that will occur.

He did but whilst I regard PP a lot higher than ToyTowns (CG); its not World level. He beat a team mate (Horton) & Grothe; no one else of any significance with this event.