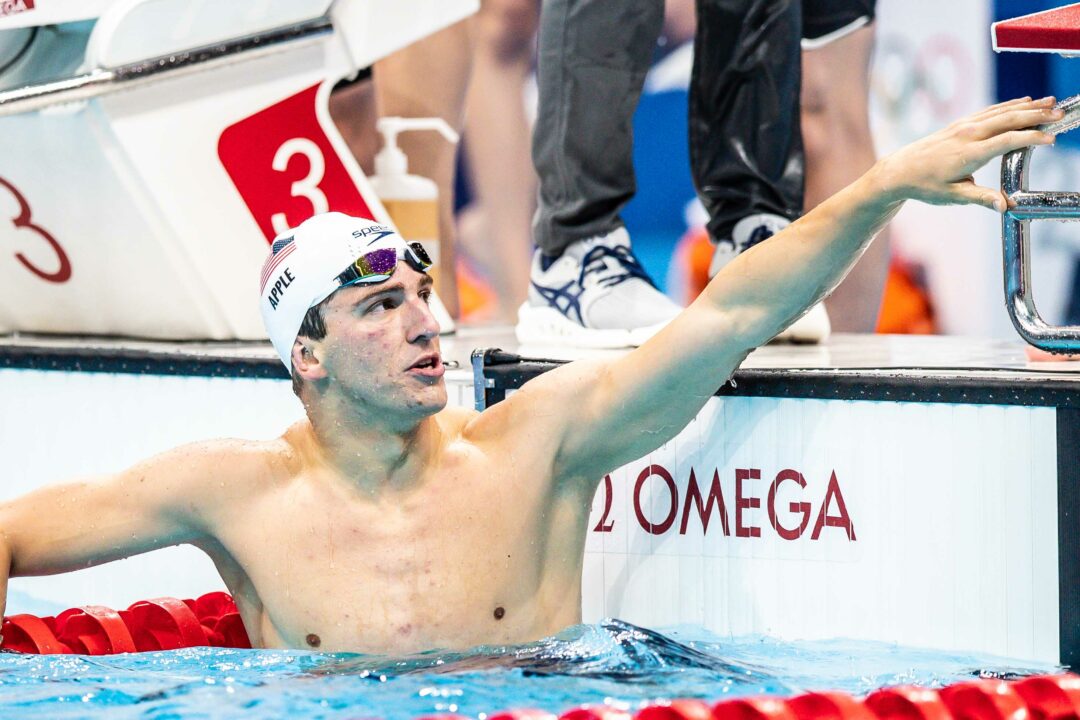 After storming to six medals during the first finals session of the week, the USA came back to earth a bit tonight, recording only a single individual medal, and finishing 4th in a couple events, before wrapping up the session in dramatic fashion.

The first event of the night proved to be something of a harbinger of things to come, as American Record holder Torri Huske touched 4th in the 100 fly, missing a medal by a mere 0.01s and finishing about a tenth of a second slower than her American Record time from Trials.

The men’s 200 free was another great example of the mixed results of the session. Townley Haas, who finished 5th in this event in 2016, missed the final after swimming slower than his prelims time.

However, Kieran Smith, who surprised yesterday for bronze in the 400 free, stepped up to the plate by throwing down a lifetime best 1:45.07. That moves him from #8 to #6 all-time among U.S. swimmers in this event. Additionally, this marks the 3rd-straight Olympics in which a University of Florida swimmer will represent the US in the men’s 200 free final, following Conor Dwyer in 2016 and Ryan Lochte in 2012. Dwyer earned bronze, while Lochte finished 4th.

Smith making the final also marks a bit of redemption for the US mid-distance crew after neither Haas nor Andrew Seliskar made the final at the 2019 World Championships.

Looking further down the schedule, the big question now is what Haas can do on the 4×200 free relay. He’s historically brought some big relay splits, including a memorable 1:43.78 anchoring the 2018 Pan Pacs relay to gold after going 1:45.56 individually, and the US will likely need him to come up big again to stay in the medal hunt.

In the 100 back, Ryan Murphy looked smooth, easily advancing to the final, but Hunter Armstrong missed the final after finishing tied for 9th. This marks the first time since 1988 since the US won’t have two men in the 100 back final, and will also end the USA’s three-Olympics streak of getting two medals in the event.

The women did their part in the 100 back, as Regan Smith set an Olympic Record and Rhyan White also safely made it to the final.

The USA went out on a high note, as Caeleb Dressel, Blake Pieroni, Bowen Becker, and Zach Apple blasted the 3rd-fastest 4×100 free relay time ever en route to win gold.

As we’ll note below, the Canadians had a great day as well, earning an individual gold medal and setting a total of three national records.

Zach Apple could fight for that individual medal

I believe the US swam the third fastest 4×100 free relay ever. The second fastest was by the French at the Beijing Olympics.