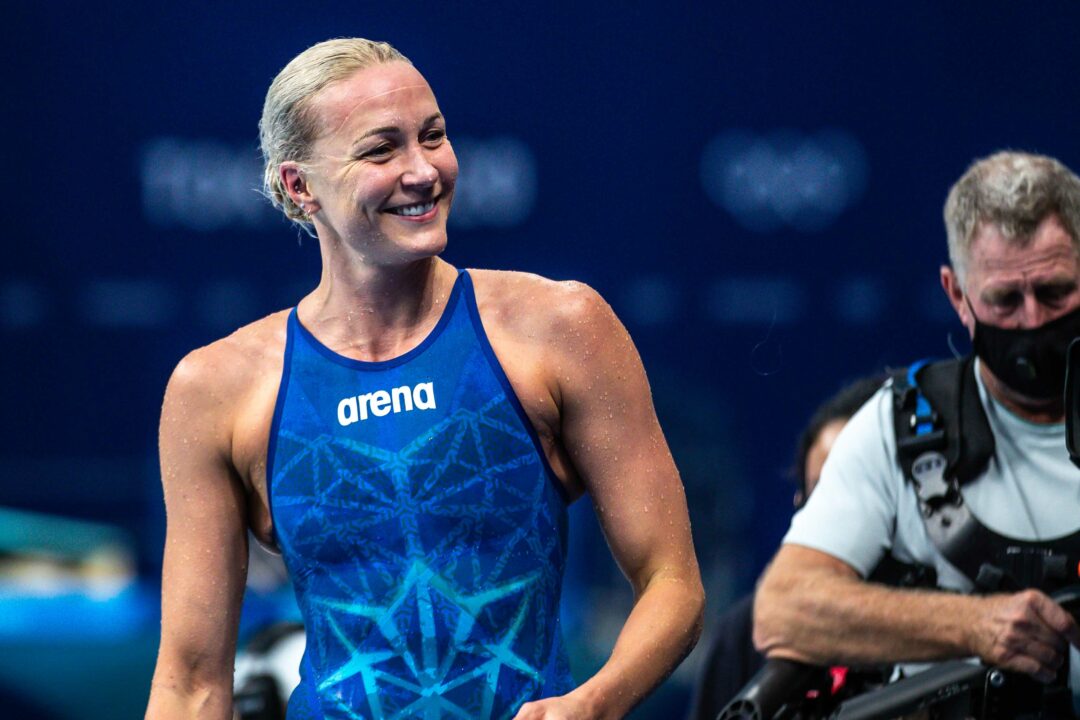 In February, Sarah Sjostrom swam a 24.07 50 free (her fastest time in 2021) before breaking her elbow that same month. She just swam a 24.07 to win silver. Current photo via Jack Spitser/Spitser Photography

Sweden’s Sarah Sjostrom won silver in the 50 freestyle final on day 8 with a time of that matched her fastest time of the year from February. But, a lot has happened between February and the Tokyo Games for World Record holder Sjostrom.

Within days of posting her fastest 50 freestyle time of the season, a 24.07 in February, Sjostrom slipped on ice and broke her elbow. This was less than 200 days before the start of the Tokyo Games.

Sjostrom underwent surgery which put screws and a metal plate in her elbow. Three weeks later, she was back in the pool (starting with kicking, and she later worked her way back up to swimming.)

She had a strong performance at the Sette Colli Trophy in June, surprising herself with a 25.42 50 meter fly which was the 3rd fastest time in the world at the time. Sjostrom had not been able to train butterfly until early June.

While this was Sjostrom’s first podium finish in Tokyo, it was a feat in itself that she matched her speed from February to win silver. Sjostrom finished 14th in this event at the 2012 Olympics and 13th at the 2016 Olympics.

France’s Florent Manaudou made history on day 8 by becoming the second person in history to medal three times in the 50 free. He won silver with a time of 21.55, .02 off the fastest time he has posted since his more than 2-year hiatus from the sport after the Rio Olympics. He swam that 21.53 in the semifinals.

In the 4×100 medley relay, Scott helped Britain earn a consecutive Olympic silver medal in the event (although he was not on the 2016 relay.)

Continental and National Records on Day 7

So what’s the verdict on if Sjostrom should’ve swam the 100fly?

Hard to her upgrading silver to gold in the 50free, but perhaps she could’ve bumped Campbell for Bronze in the 100free?

In the 4×100 medley relay, Scott helped Britain earn a consecutive Olympic silver medal in the event (although he was not on the 2016 relay.)

Duncan Scott actually anchored that relay, he was blown away by Adrian splitting a 46 IIRC

The picture of her pointing at the giant scar on her elbow after touching the wall in the 50 is one of my favorites of the Games. SHE DID THAT. 🙌🏼

I sincerely hope Sweden has a female 100/200 freestyler and/or backstroker come up the ranks between now and Paris. Sweden getting an Olympic relay medal feels like the one jewel missing from Queen Sarah’s crown. It’s definitely not from lack of effort.

Sarah, Michelle Coleman and Louise Hansson swam their first relay together at worlds 2013. Since then they have been looking for that #4 freestyler… (or preferably also #5 so they can rest Sarah in prelims).

Maybe Michelle will focus more om backstroke now after her Swedish record in June. In interviews it sounds like she barely swims it in practice.

I,m Canadian but Sarah is my favourite non Canadian swimmer..possibly a tie with Katie Ledecky.Class in and out of the pool.

She is simply amazing.

Contract to what is in the article, Duncan Scott was on the Team GB relay in Rio where they won silver. He anchored on the free.