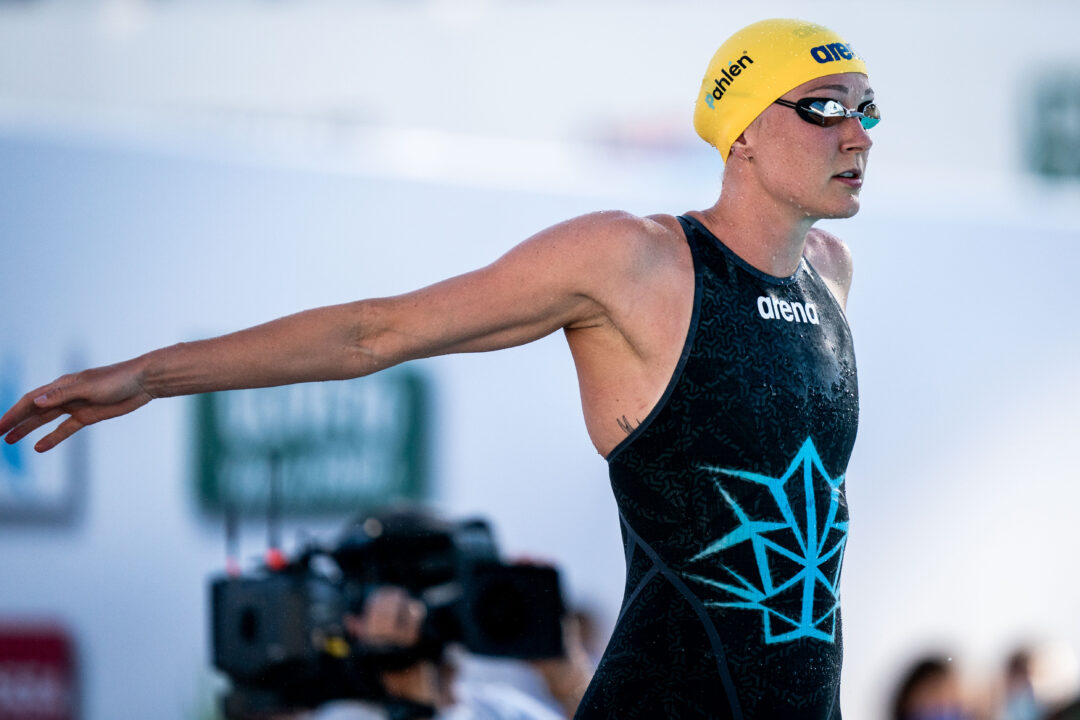 Olympic champion and world record holder Sarah Sjostrom came within .10 of her best 2019 in-season 50 fly time less than 5 months after breaking her elbow. Archive photo via Mine Kasapoglu

Corbeau took down Max McHugh and Reece Whitley, establishing the top time in the country in the process.

Three-time Olympic medalist Sarah Sjostrom of Sweden started off 2021 en route to defending her 2016 Olympic title in the 100 fly at the Tokyo Olympics. It is one of four events that she currently holds the world record in.

In February, she slipped on ice and broke her elbow, seemingly shattering her chances at what felt like a sure thing – Sjostrom being a top contender in the 100 fly in Tokyo.  She also took home silver in the 200 free and bronze in the 100 free at the 2016 Rio Olympics and was in the running to medal in those events in Tokyo.

Butterfly became one of her bigger obstacles during her recovery and return to racing due to the muscle atrophy in her injured left arm. When she was able to resume training, she focused mainly on freestyle. She also holds world records in the 50 and 100 free.

Less than five months after the injury and undergoing surgery, Sjostrom blasted a 25.42 in the 50 fly at the 58th Sette Colli Trophy. This was her first butterfly race since the injury and she came within a second of her own world record from the 2014 Swedish Championships.

She posted the 3rd fastest 50 meter fly in the world this year to out touch the Netherlands’ Ranomi Kromowidjojo, the fastest woman in the event this season:

This swim exceeded all expectations, including Sjostrom’s. “This was the best butterfly comeback I could’ve done,” she told SwimSwam after her race.

While Sjostrom won gold in the 100 fly in Rio, she said she is still “not convinced” about racing the event at her 4th Olympic Games in Tokyo

If anything, her Sette Colli performance proved that Sweden’s sprinting star is back in the game. Pre-injury, in 2019, her fastest in-season 50 fly time was 25.32.

I hope she races the 100, even if it means Emma missing out on a medal. I want to see the best of the best in Tokyo and Sjostrom should be part of that.