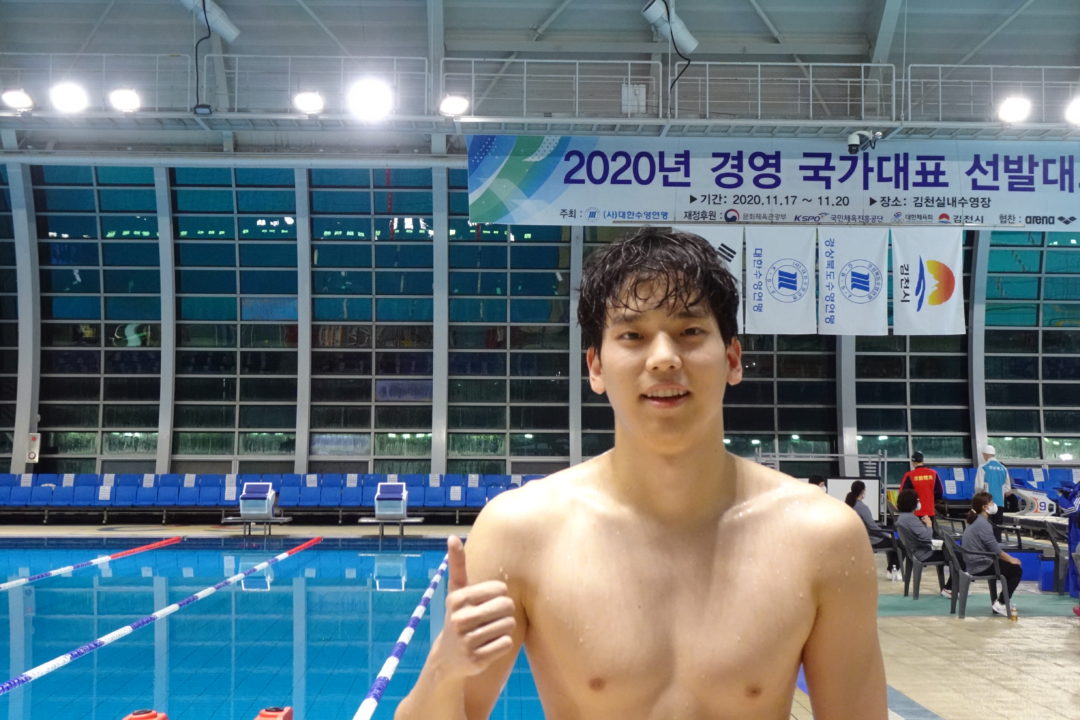 Lee Juho notched a band new Koren record of 1:56.77 in the 200 back prelims to qualify 4th overall into the semi-finals. Archive photo via Jinho Lee

South Korean swimmer Lee Juho is the day 5 recipient of the official SwimSwam prelims all-star award at the Tokyo 2020 Games. Juho delivered a 1:56.77 heats swim in the 200 backstroke which allowed him to advance in 4th place overall to the semi-finals. The only men to touch ahead of him in the prelims were Ryan Murphy (1:54.63), Evgeny Rylov (1:56.02), and Bryce Mefford (1:56.37).

The swim for Juho was an improvement upon his own 1:57.06 Korean national record from November 2020, marking his first time under the 1:57 mark. Along with moving up time-wise, Juho’s swim allowed him to jump from 21st rank heading into the event to 4th.

Juho’s standout prelims swim wound up being his quickest swim of the meet as he fell to a 1:56.93 during semi-finals which wasn’t quite fast enough to move onto the finals, giving him an 11th place finish overall. Juho came extremely close to making his way into his first-ever Olympic final as he was only 0.24 off Ryosuke Irie‘s 8th place time of 1:56.69 and 0.74 away from Adam Telegdy‘s 1:56.19 for 4th in the semis.

Interestingly, Juho’s 11th place finish in the 200 backstroke in Tokyo matches his placement in the event 2 years ago at the 2019 World Championships. Juho finished 11th in Gwangju but was nearly a second slower than he was in Tokyo with a 1:57.68.

The 200 backstroke was Juho’s second individual race of the Games as he also contested the 100 backstroke earlier on in the week. In the 100, Juho went in with a 53.68 for 23rd seed and was a little slower than his seed time during prelims, hitting a 53.84 to tie Guilherme Basseto of Brazil for 20th.