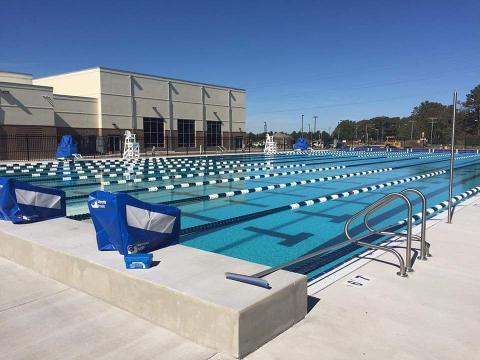 Tide Swimming Board President, Katy Arris-Wilson, joined the Mayor of Virginia Beach, Will Sessoms, the CEO of the YMCA of South Hampton Roads, Billy George, and the entire Tide Swimming family for a ribbon cutting ceremony. Current photo via TIDE

USA National Team Alumnus and Tide Swimming Board President, Katy Arris-Wilson, joined the Mayor of Virginia Beach, Will Sessoms, the CEO of the YMCA of South Hampton Roads, Billy George, and the entire Tide Swimming family for a ribbon cutting ceremony on April 11th, 2016. The event was to celebrate the opening of the city’s first Olympic size swimming pool and the new 50,000 square foot Princess Anne Family YMCA Center in Virginia Beach, VA.

TIDE Swimming worked over the past five years with the city and the YMCA to develop this unique partnership. The City of Virginia Beach donated the land estimated at $3.1 million dollars after Arris-Wilson approached Mayor Will Sessoms with the team’s vision for swimming in the community. The YMCA of South Hampton Roads Virginia partnered with TIDE Swimming to build the $13 million dollar project.

This is the only Olympic size pool of its kind in South Hampton Roads. It is now home to more than 300 members of TIDE Swimming and YMCA members. In addition to this 50 meter pool, Tide Swimming will continue to offer programming at two existing YMCA locations: Mt. Trashmore and Hilltop in Virginia Beach, VA.

Arris-Wilson expressed appreciation and gratitude to the city, the YMCA and the membership of Tide Swimming for the commitment that enabled this project to become a reality. She also expressed excitement for the future and the positive impact this partnership will have on the entire community of Hampton Roads. “Tide Swimming’s tag line is Building Champions in Life Through the Sport of Swimming,” said Arris-Wilson. “This new, state of the art facility and 50 meter pool will allow us to introduce more kids to the great sport of swimming as well as host meets which will bring positive economic impact to the area.”

At 50meters X 25yards, the Myrtha Pool features Myrtha Structural Ceramic and Skimmer Ceramic headwall technology, a proprietary side wall competition inlet and Myrtha “Track Start” starting blocks. The pool was certified by USA Swimming on April 8, 2016 and is located at The Princess Anne Family YMCA at 2121 Landstown Road, Virginia Beach, VA 23456.
The new pool is outdoors, and in the colder months is heated to an average of 82 degrees. TIDE Swimming is currently working to raise funds for a permanent cover.

TIDE Swimming is a Silver Medal Club and was founded in 1988 by Sandra Jones. More information can be found at tideswimming.com

This is awesome! VA is really becoming a powerhouse state for swimming. Great to have nice facilities to go along

Way to go Katy and TIDE swimming. I know this was a team and community effort, but your leadership, Katy, was critical. You are giving back in a huge way to the entire Virginia Swimming community that you have been a part of since your age group days.

Old Dominion Aquatic Club should’ve done this 32 years ago when they we’re on top of the game.