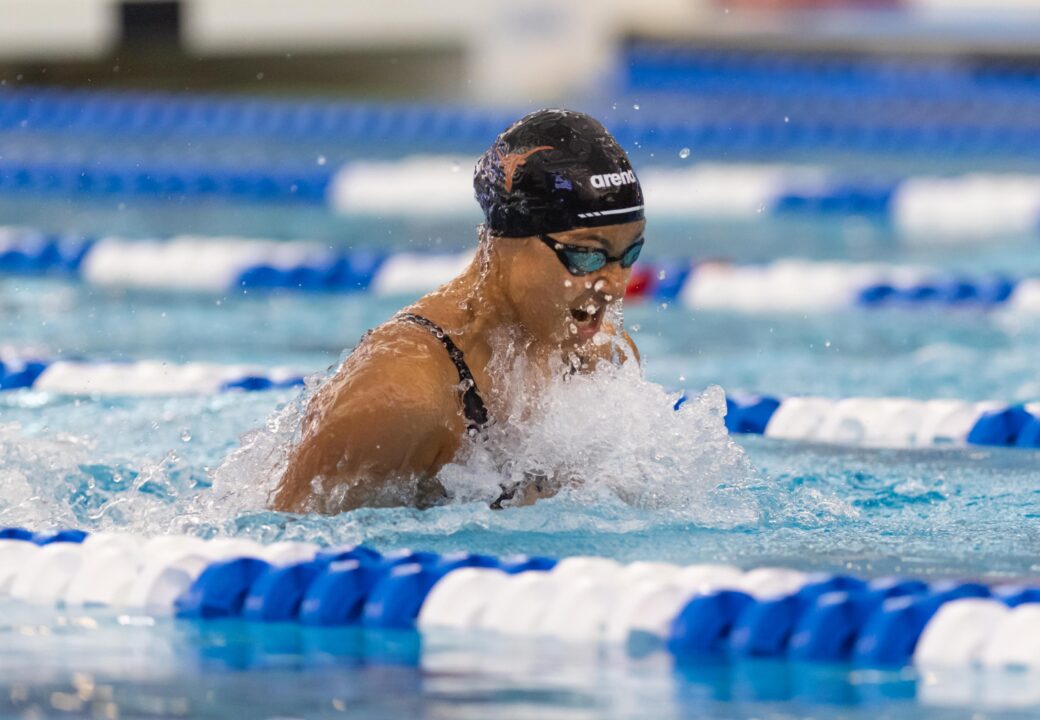 University of Texas sophomore Anna Elendt blasted a new Texas record of 2:04.69 in the 200 breast for the 2nd fastest time in the NCAA this year. Current photo via Luke Jamroz Photography

University of Texas sophomore Anna Elendt blasted a new personal best and University of Texas record in the 200 breast this afternoon at The Sterkel Classic against Rice. The German native blasted a 2:04.69, smashing her previous lifetime best by nearly a second and a half. Elendt’s previous lifetime best came at last season’s Texas Hall of Fame Invite, where she posted a 2:06.04.

The swim now makes Elendt the second fastest swimmer in the NCAA this season, behind only Virginia’s Kate Douglass’ massive 2:03.14 from earlier in the day. Last season, Elendt finished 12th in the 100 breast and 9th in the 200 breast at NCAAs, but was off of her season best in both swims.

Elendt was out nearly a full second faster at the 100 point than last December, turning in a blazing 59.67 at the 100. The biggest difference in her race came on the third 50, however, where she was 6 tenths faster on that 50 alone, before closing the race out in a nearly identical 32.7.

The swim also lands Elendt in the top 10 performers of all time in the event, clocking in just behind Texas A&M alum and 2012 Olympian Breeja Larson. The swim also adds another name to the hat for what is becoming a fairly crowded field for this year’s NCAA Championships. She also joins Douglass, NC State’s Sophie Hansson and Virginia’s Ella Nelson as the fourth active NCAA swimmer currently in the top 10 performers all time.

Elendt’s swim breaks Laura Sogar’s program record of 2:05.04 from 2012. At the time, Sogar was the third fastest performer in history, behind only US Olympic medalists Breeja Larson and Rebecca Soni.

The swim also bodes well for the Longhorns upcoming postseason meets. They are the heavy favorites to win the Big 12 conference title and project to contend for an NCAA team trophy again after finishing in third last year with 344.5 points and all of their individual scorers returning from a year ago.

A full meet recap will be published later this evening.

I’m a little surprised that she’s this fast now with how little attention they need to put on Big 12s. Last year was the best the sharpest the Texas women have ever been at NCs, hopefully that trend continues this year.

Agreed. Even last year they were faster at mid season invite. Hopefully they can nail down peaking at the right time!