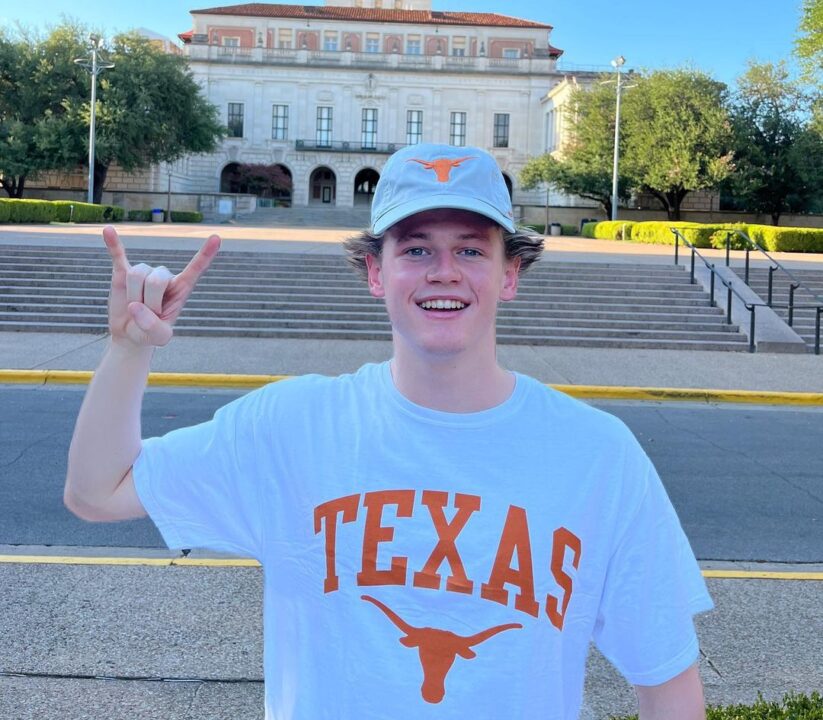 Butterfly and IM specialist Flanders has decided to stay in-state and commit to Texas' class of 2023. He finaled in the 100 fly at the 2022 Junior Nationals. Current photo via George Flanders

Junior Nationals finalist George Flanders has announced his decision to stay in-state and continue his academic and athletic career at the University of Texas for the fall of 2023.

“I’m excited to announce my verbal commitment to swim and study at the University of Texas. I want to thank my family, coaches, teammates, and friends who have helped me along this journey and I want to thank Eddie Reese and Wyatt Collins for giving me the opportunity to be a part of such a legendary program. Hook ‘em! 🤘”

Flanders is a current senior at Vista Ridge High School in Cedar Park, Texas, about 20 miles north of his future campus. He trains with Nitro Swimming and had an eventful end to his 2021 short course season at Winter Juniors in Austin. He went into the meet having never broken 1:50.00 in the 200 IM. Then, he swam a 1:49.48 to make the ‘C’ final and then a 1:48.47 later that day to place 18th overall. Flanders had another two-lifetime-best-times-in-one-day feat in the 100 fly where he posted his first Winter U.S. Open cut in prelims (48.53) and brought that down to a 48.39 in finals to place 24th. In the span of one year, Flanders took 1.5 seconds off his lifetime best 100 fly time.

Most recently, Flanders was a 100 fly finalist at Summer Junior Nationals in August where he placed 11th. That race was one of three lifetime best times he blasted in Irvine. He also placed 50th in the 200 IM and 69th in the 200 fly with best times. When he arrives on campus next fall it will be exciting to watch how that long course speed will transfer to short course.

With one year of high school and club training left, Flanders already has Big 12 Conference finalist potential in four events. Last season, his best times would have placed him in the 200 fly ‘A’ final, at the top of the 200 IM ‘B’ final, and in the 100 fly and 200 free ‘B’ finals. He is joining very strong training groups with the Longhorns while also helping reinforce two races that lost one of their top Big 12 finalists Tim Connery to Virginia. Flanders is an especially valuable addition to the 100 fly group that was led by defending Big 12 champion Connery and 2nd place finisher Alvin Jiang (who has now graduated.) Now, junior Zac Van Zandt, who placed 3rd, leads that group.

Texas has a phenomenal IM squad led by brothers Carson Foster and Jake Foster who went 1-2 in the 200 IM at last season’s championship meet. While Connery also placed high in the ‘A’ final in this event, the Longhorns had five ‘A’ finalists and won’t be too impacted by losing Connery. Their 200 fly group is so strong that senior Sam Artmann’s exhibition time would have won the event. Junior Coby Carrozza snagged 2nd place and will also lead that training group as well this season.

Horns Could have used him in Lubbock today. Congrats on the decision.